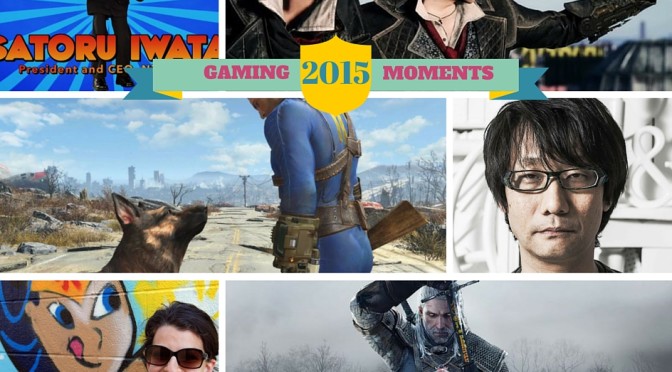 We’re less than a week away from the Christmas holidays and that means it’s time to reflect on the year that was.  The new generation is in full swing, but 2015 wasn’t exactly spectacular, in terms of games, with many AAAs getting shifted to next year. However, there were still some spectacular headlines. I’ve picked the big news and gaming highlights (and lowlights) of 2015, according to me.

The year began with The Order 1886 and it was more of a whimper than a bang. Although the game looked gorgeous, most people agreed that it was actually just a dumb shooter with a pretty façade and potentially cool setting.

This was another disappointment on the 2015 schedule. Not only was the performance of the PC version less than satisfactory, the eye-watering price-tag on the DLC caused more disappointment, when players actually got the content. Arkham Knight looked pretty enough on console, but gamers expect to be treated better.

When it comes to surprises, E3 2015 packed them in, as Team Ico announced the about-to-become-myth The Last Guardian. This could only be topped by the Shenmue (we thought it could never happen) III news, followed by the Final Fantasy VII remake, which all left fanboys close to tears.

Microsoft also had a good show, as Xbox One announced backwards compatibility, although this didn’t  help it steal the sales lead from PS4.

We’re still waiting. Now you see it, now you don’t – that’s how I feel about this whole thing. We’ve been promised so much, but we’re still waiting. Microsoft’s Hololens presentation at E3 was the most interesting thing I’ve seen so far. I’m withholding judgement, until something actually happens, though.

July 2015 hit the games industry hard, as Satoru Iwata lost his struggle with cancer, at just 55. Fans and industry alike were shocked and saddened to see such a bright star blink out.

It all began when the ‘a Hideo Kojima game’ strapline began disappearing from Konami games, including the Metal Gear series. No press statement, nothing – they just thought we wouldn’t notice. Then Kojima, a prolific social media poster, was no longer online, as his accounts lay dormant. Rumours were flying and finally Konami responded to calls for clarification, but just said that  all is fine and that Kojima was just on holiday.  By this time, we all more than suspected that a split had happened.

When it came to light that Konami had stopped Kojima from attending an award ceremony, in the UK, it became clear that this was no holiday.

Just this week, Kojima finally confirmed that his contract with Konami has ended.  No surprise there then, but we’ll probably never know what really happened, other than a PR disaster on Konami’s part.

Games that Broke the Mould

2015 wasn’t a triple A year for me because there were just so many indie titles that offered something different. Here are the highlights…

Life is Strange pretty much stole the year and left gamers on the brink, as they grappled with the shock endings of every episode.  Although the last episode didn’t quite pull it off, Life is Strange is still a must play because it proves that games can tackle complex issues.

If someone had told me that an FMV game would be one of the highlights of the gaming year, I’d have laughed in their faces. Then Her Story came along and turned us all into detectives, using clever, yet simple devices to deliver a unique gaming experience. Another must play.

Another game to confound the ‘but is it a game?’ camp. Everybody’s Gone to the Rapture is like a radio play, wrapped in an end of the world game. The score, the acting and script, as well as the gorgeous graphics make this a game to savour. Interactive storytelling doesn’t get much more relaxing, yet compelling than this. One of those games I was sad to finish.

Back in AAA land, Fallout 4 was the big winner of the year, with the whole of the gaming world disappear into (or out of) the vault for at least two or three weeks. When it comes to open world gaming, it’s hard to beat, but The Witcher 3 gave it a serious run for its money. The verdict on Geralt’s latest outing was overwhelmingly positive, making it a real contender for game of the year.

Then there was Metal Gear Solid: The Phantom pain, with all the Kojima/Konami rumours flying around. This didn’t detract from the game itself, which gave fans an open world Snakethon. Ubisoft churned out Assassin’s Creed: Syndicate, which some said was a return to form, but may not have convinced the people turned off after the Unity debacle.  Halo 5 and Rise of the Tomb Raider were key Microsoft exclusives, but seemed to get lost in the Fallout frenzy, which is a shame. And if all else fails, there’s always a Call of Duty game – this year was the turn of Black Ops III, which proved popular with our very own Marie – check out her review.

State of the Industry

In terms of cold, hard figures, PS4 sales broke 30 million worldwide, beating PS2’s sales, this far after its launch. Microsoft remains shy with its sales figures for Xbox One, so we can only assume it’s not 30 million. And with some strong Sony exclusives incoming in 2016,  PS4 could extend its lead.

2015 was a much better year for women in games. Even Koei Tecmo became sensitive to the shift in attitudes, as it decided not to release Dead or Alive Xtreme 3, due to its sexist content. The truth is, the puerile and sexist mini-games actually hide a decent volleyball game, which is a shame.

I’m going to end on two positive notes. Anita Sarkeesian made the Time 100 list of the world’s most influential people, with a write-up by Will Wheaton.  In addition, Zoe Quinn sold the rights for a film, which focuses on her abuse at the hands of trolls during the terrible Gamergate episode. This is a real indication that things are changing, in spite of the reluctance of some and the hatred and vitriol of others.

That’s it from me for 2015 – see you in 2016, when I’ll be looking ahead to the games that will blow our minds. Until then, enjoy the games we’ve got already and try something new because there are a lot of exciting new experiences out there. I probably say this every year, but it’s a good time to be a gamer.