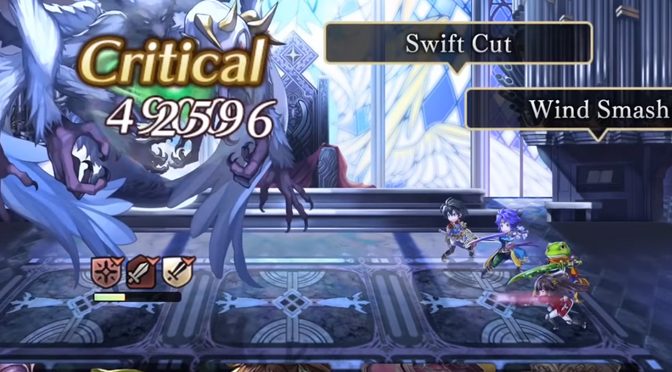 Another Eden: The Cat
Beyond Time and Space

If you think I’m ready to talk about that game I put off last week, you’d be wrong. I gave it a chance, but I ended up running into some issues with it freezing. Instead of reviewing a game I only got a single match out of, I decided to check out something else instead. That something is Another Eden: The Cat Beyond Time and Space.

Another Eden is a JRPG for mobile devices that seeks to change how players enjoy the genre on the platform. That’s refreshing to hear. I love JRPGs, but the majority of smartphone ones are endless grinding that I just can’t get behind. Rather than going that route, Another Eden focuses on being a JRPG first and a mobile game second.

The story of Another Eden has players take control of Aldo. He’s a young warrior in a small village that is celebrating the anniversary of its kingdom. Some shenanigans go down and Aldo ends up finding himself flung through time. He has to team up with a variety of characters from different eras, including a man cursed to look like a frog, in an effort to save the planet’s future.

If anyone out there is like me, this probably sounds incredibly like Chrono Trigger. There’s a reason for that. The main force behind this game is Masato Kato, the writer for Chrono Trigger, as well as director and writer for the sequel Chrono Cross. I’m not entirely through the game yet (this is a mobile game after all), but I can say that I’m enjoying the story. It’s not an entirely new concept, but it does feel right.

The gameplay of Another Eden is another moment that really shows the value of the game. Players can take a party of up to four characters, as well as two reserve characters, into battle. They can select attacks, skills or abilities for each of these characters to take during the turn. After doing so, the turn plays out for both the player’s party and the enemies’. This is a true turn-based RPG, which is something I always welcome.

Getting characters in Another Eden is where the mobile game aspects start to push through. The game uses a gachca system for this. That means players will have to spend a premium currency to summon other characters. I won’t deny that I’m not a fan of this system. However, I will note that Another Eden doesn’t take it too far. I was easily able to build a party of four consisting of story and summon characters. I’ve also been saving up the premium currency in the game and it doesn’t appear too difficult to collect. There also aren’t annoying pop ups throughout the game pushing the player to buy more of it, or special deals like that.

Another plus for Another Eden is how it handles moving around. The game uses simple touch and drag controls for horizontal movement. Players can also swipe up and down to move between different planes. Rather than being a top-down game, Another Eden’s perspective is from the side. It’s an interesting idea that I have seen before. The biggest thing is that I’m genuinely surprised with just how well it controls on a touch screen.

Moving on now we can talk about the visuals in Another Eden. While some may be expecting pixel art, the game doesn’t go this route. Instead, it opts to use a more chibi style of art for its game. It isn’t too chibi and looks great. There’s lots of detail in the world. The characters also have nice non-chibi portraits when speaking. There also also loads of bright effects in battle that keep them interesting to watch.

The audio in Another Eden is another major bonus for JRPG fans. It includes a great soundtrack with some songs by Yasunori Mitsuda. Mitsuda is the composer for the Chrono series and his additions to the game are great. Even the songs not by him still fit well with the game and are wonderful to listen to. The sound effects are also solid and there’s even voice acting for each of the characters. Granted, this is only during battle and at certain points during the story.

Overall, I really am just blown away by how great of a mobile game Another Eden is. The game really does focus on just being the best JRPG is can, while also being a mobile game. More developers should take note of this if they want their games to stand out from the endless grind that is smartphone JRPGS.

Another Eden: The Cat Beyond Time and Space earns 4.5 GiN Gems out of 5!