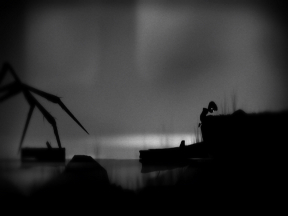 Join me with this week’s Time Waster as we travel through Limbo. No, not that silly dance where we slide under a pole without trying to me a fool of ourselves, limbo as in the area between Heaven and Hell or something like that.

I say ‘something like that’ because the game doesn’t really give us much in the way of narrative or story of any type to feed off. All we really know is we are traveling in search of our sister. At that point the game leaves us with one of those open to interpretation endings that can never satisfy. The easiest thing I can think to compare it to is Lost. We travel all the way through this epic and suspenseful story only to realize there isn’t a true end. Some believe that this is a professional way of gripping the player. I disagree. Open interpretation endings as featured in Limbo and Lost come across to me as the developers building something amazing only to realize near the end that they never had a goal in mind story-wise. Still, I can’t deny enjoying the adventure that was Limbo; I just can’t say it scratched that proverbial itch for answers.

The gameplay for Limbo continues the trend of not quite meeting expectations. The first half of Limbo is an amazing puzzle adventure. Drag this body here to jump across the water, trick the giant spider into stepping into a bear trap, and all sorts of other new and interesting ideas for puzzle gaming. Sadly, the second half of Limbo stops being a great puzzle game and becomes a "push this block here" kind of game. It isn’t even that the block puzzles are bad. In fact, I found myself dying more than once while trying to solve most of the puzzles. It’s just that it showed us a glimpse of what the game could be and then shoved us right back into the mediocre.

Even more disappointing is just how short Limbo is. I finished the game in a little under three hours and that was while I screwed around and tried to abuse the game system to see if I could solve puzzles in a way I wasn’t supposed to (which isn’t really possible). Three hours of gameplay for $10 doesn’t really seem like it’s worth it. This also means that the great first half of Limbo is roughly an hour and a half.

Visually speaking Limbo doesn’t disappoint though. The world is composed of blacks and whites, characters and objects lack detail, and the screen has a certain amount of graininess to it. While I can’t say this art style would work with any other game it works wonderfully with Limbo. A great example is just how terrifying the giant spider in the game is. I’m not one for spiders in the first place and Limbo with its pure black and whites allowed me to see all of the hairs of the spiders’ body as it chased me. That’s a small detail I would have never noticed if it hadn’t been for the artistic style of the game. I guess it doesn’t really lack detail but at the same time it does.

When it comes to audio there isn’t really much in the way of music. Instead the game relies on ambient noise and white sound to give off an eerie suspenseful feel. Sure a lack of music isn’t really something that we expect to make a game better but for Limbo it worked out great. It helps to give off that "I’m alone" feeling in the game which makes it so much more emotionally jarring when we finally run into other humans who are also trapped.

Limbo isn’t exactly the perfect game…which is really sad considering its one of those titles that has everything it needed to be great but wasn’t quite fleshed out enough to see its true potential. Still, Limbo did bring a fair amount of original content and caused me to feel emotional over a 2-D character and that alone earns it some praise.