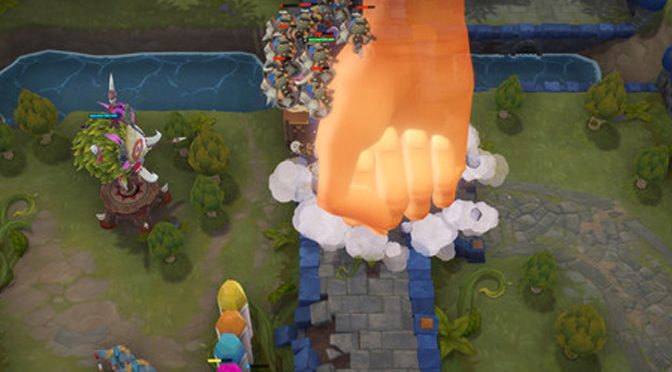 I’m finally ready to talk about the game I have been putting off the last couple of weeks. Honestly, it looks like it wasn’t that big of a deal delaying. That’s because our Time Waster this week is MINImax Tinyverse, which is still in Early Access.

MINImax Tinyverse is a MOBA game that is free-to-play. However, it differs from its peers in the genre. That’s because it doesn’t have the player controlling the random mobs, or the heroes. If that sounds like a bad idea, then you’re right.

Instead, of controlling the units in MINImax Tinyverse, the player acts more like a god. This has them affecting the battlefield in a few different ways. Among these are the ability to build ramps, set up crayon walls and pick up the hero and drop them again.

Each of these different abilities do have their own strategical value. Building ramps can create quicker and safer ways to get troops to where they need to be. In that same vein, walls can stop opponents in their tracks, or force them to make a detour. Picking up heroes lets the player drop them on enemy units, which deals damage and scatters them.

Outside of these abilities, players also have access to miracles that they can use to affect the battle. There a lot of different ones available and more to unlock. The miracles can deal damage, slow enemies, buff allies and more. Players can only bring six miracles with them into a match, so it helps to grab ones that work well together.

The other big part of MINImax Tinyverse is choosing what hero and troops to bring into battle. The developers sent me a code for the extra DLC heroes in the game, but I decided not to use them. Instead, I wanted to experience what the game was like for the normal player.

As for troops, I never once messed with this. I always just took the most basic of troops into battle and it got me victories more often than not during my time playing. Honestly, it just really doesn’t feel like the troops you bring into battle matter near as much as the miracles.

Truthfully, MINImax Tinyverse just feels a bit bare. Managing the various different miracles and abilities in the game is fun, but it lacks real engagement. Not being able to give directions to troops or the hero units just makes the game feel way too shallow.

The visuals in MINImax Tinyverse are actually really solid. One of my worries when it comes to Early Access games is the jankiness, but that wasn’t a problem here. Everything looks smooth and there’s a nice, clean UI. The audio is also solid with good background music and solid voice acting as well.

It’s obvious that the game is going more for a child audience, but then what is it doing on PC. The market the developers are aiming for is on console and that’s where this game should be. This seems like it would do much better as a Switch game, so go ahead and put it there. I’m not angry that it’s on PC, by the way. Just confused.

As always, Early Access games don’t get review scores. That still holds true with MINImax Tinyverse. Even if it does feel like it has a bit more polish than a typical Early Access title.