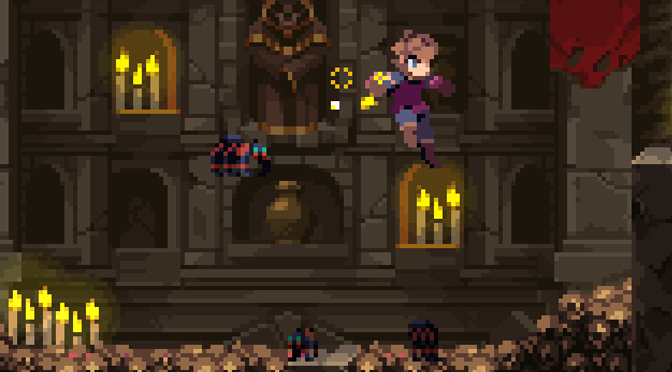 This week I checked out an early version of a game called Chasm. Chasm is a Kickstarter game that has been successfully funded and is now available for pre-order.

Chasm puts players in the role of a weary warrior that is making his way home. On his journey, he reaches a small mining town that has run into a unique problem; they can’t leave the town and all the miners are missing. The miner chief enlists the help of the warrior to figure out what is going on in the mines and put it right.

Chasm is a 2D adventure game that is also part RPG. The early version that I played allowed players to explore three or four levels of the mine before cutting them off. My time exploring these mines had me collecting loot and leveling up while fighting monsters.

Collecting loot in Chasm is a main drive for the game. Better equipment has a drastic effect on the player’s stats and is a necessity to move forward. Extra equipment and loot that is picked up during the journey can be sold on the surface for gold. This gold can be used in turn to buy better armor, weapons and spells.

Chasm’s level system was really straight forward and didn’t give players a lot of options. Rather than being allowed to select which traits were increased, every level up assigned stats automatically. The style of Chasm had me hoping for a little more control over my stats, but this doesn’t mean that the system is bad.

I really like the focus that Chasm puts on exploration. Each floor of the mine starts out with two different paths to take. These paths won’t always lead to the next floor and it gives players a lot to go back and look for on the path not taken. There’s also a map available for every level to help players remember where they have been, but it doesn’t show rooms that haven’t been explored by default.

I had a few issues with the controls of Chasm. It wasn’t that any of them handled badly, but it was their placement that bothered me. Talking to people, opening chests and going through doors is done with the A key. Left-handed attacks are bound to the S key and right-handed attacks are bound to the D key. Jumping is Space, the Arrow keys control movement and Enter brings up the menu.

My issue was not being able to switch my controls at all while playing. Granted, this was probably due to the early version of the game, but it really bothered me. I also didn’t understand why a separate key was needed to perform action like opening chests. I feel it would have been much better being bound to the Up Arrow key. That key doesn’t control movement and only allows players to look up after holding it for some time. This change would put these actions in a place where it is still easily reachable, but doesn’t get in the way of the combat-based keys.

Chasm is a game that uses beautiful 2D sprites and background to bring its world to life. The early version of the game that I played only had a few areas to explore, but all of them were filled with detail. My one big gripe here was that I couldn’t set the game to full screen or change the resolution. However, this is likely another issue caused by me playing an early build of the game.

I really enjoyed the audio in Chasm. As noted above, there are only a few areas to explore, which means that the music is limited, but I really like what I heard. It doesn’t default to the retro tunes that many indie games use and this really helps it stand out. At the moment, the music might just be my favorite part about the game.

Overall, I like what I’m seeing in Chasm. If the game brings all that it promises, it will be another great entry into the indie market and a welcome addition to my game collection. Pre-orders for the game can currently be set up through the Humble Bundle Store or the game’s website. The Humble version of the game includes many extras and cost $30 and the website has a version that is just the game for $15.

Chasm won’t be given a score and will instead have a placeholder of 2.5 Gin Gems out of 5 due to its Alpha status.