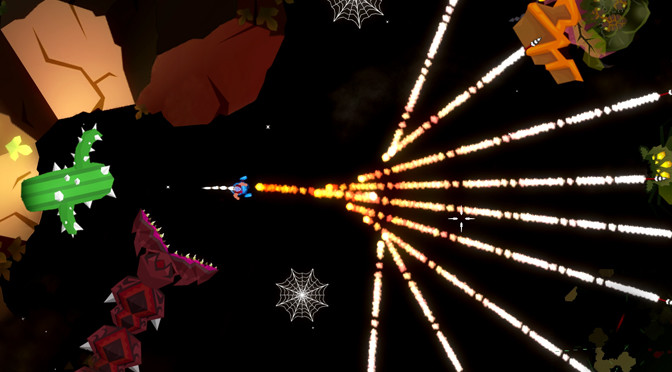 This week I’m switching it up a bit by checking out a game that isn’t actually out yet. Long-time readers know this happens every once in awhile with the Time Waster.

The game I’m talking about this time around is called Blacksea Odyssey. The version of the game that I’m playing is a demo of the alpha. It’s still early in development and is a little rough around the edges, but it has an interesting concept that I wanted to share with everyone.

Blacksea Odyssey is a top-down shooter that has players taking on giant space monsters as part of a tournament that occurs once every decade. There are four different characters competing in the tournament. The Old Man is one of these characters and he’s a previous champion of the tournament.

The demo puts players in the shoes of the Old Man. He’s this gnarly looking guy with a huge, white beard that surfs around in space with a harpoon. Pretty sure all of the above means he’s the baddest dude in the galaxy.

The controls of Blacksea Odyssey are fairly straightforward.  The Old Man is moved with WASD Keys and aiming is tied to the mouse. There are two types of attacks: spears and harpoons. spears are normal damaging attacks. The harpoon can be charged up and fired. If the player hits an enemy in the right spot with the harpoon, it will attach to the enemy. This allows the player to remain close to the big baddies while firing spears at them.

There’s also another major feature of the harpoon that is what makes this game interesting. After attaching it to an enemy and dealing enough damage to the body part it’s attached to, players can rip that part of the creature’s body off. This does massive damage and can also open up new parts of the monster for players to attack.

This alpha version of Blacksea Odyssey currently has three different bosses that players can fight against. There also also smaller enemies on the map that can be taken on. Killing these can make battles easier and they also have a chance to drop keys. Keys can be used on chest found in levels, which hold credits, runes and usable items.

Currency is used in the shop between levels to purchase runes and usable items. Runes can be equipped to the ship and spear to give them different effects. Usable items are just what they sound like. Sometimes they heal, other times they offer boosts to the character’s abilities.

The whole idea of Blacksea Odyssey is really cool. I like the idea of having to rip apart these giant creatures. It makes for a progressive boss battle that changes the more the player rips apart the enemy.

The graphics look alright in the game, but are a little sketchy at the moment. As I’ve already said, this is an early version of the game and its still unpolished. The same goes for the audio.

I do have one complaint with Blacksea Odyssey. The controls feel a little loose for the type of precision gameplay that the developers are looking for. Maybe this is something that will change over time, but I’m not sure and wanted to mention it.

Overall, Blacksea Odyssey looks to be shaping up into an interesting game that I wouldn’t mind adding to my library. It also currently has a KickStarter running. You can check that out at this link. You’ll also find a download there of the same alpha demo that I’m playing so you can check the game out for yourself. It’s currently looking at a Spring 2016 release.

As with all alpha, beta and demo previews, I won’t be giving Blacksea Odyssey a score. Instead, I’ll be use a placeholder of 2.5 GiN Gems.