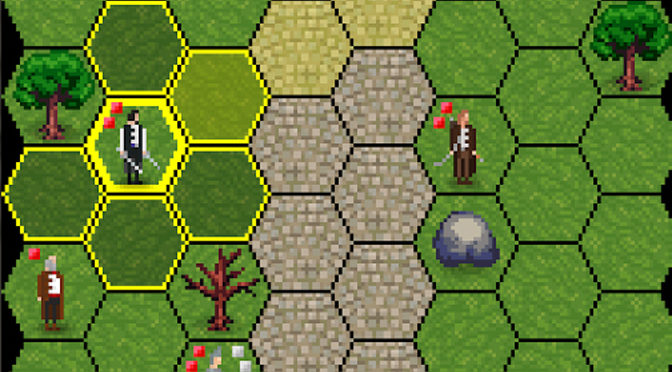 My adventures in time wasting this week had me turning to my smartphone for my gaming needs. “Why exactly?” Because I don’t live anywhere close enough to a town to get good internet. Instead, I’m left with satellite internet that has a very limited data cap on it. I’m almost out of data for the month and I still have a week left before the cycle resets. Sucks, right?

What doesn’t suck is that I still have plenty of data left through my mobile carrier, which is why I went with my smartphone this week. In a way, I’m glad this is how it turned out, because if it hadn’t, I never would have discovered Adventurer League.

Adventurer League is a roguelike RPG that has a heavy focus on text and choices. Players can choose from three different classes and five backstories when creating a character. They can also chose the character’s name, or let the game suggest one.

Once the player has created their character, they will then have to set up their adventuring company. This means giving it a name and designing its emblem. Then the player will be given a list of five companions. They must chose two of them to have join their group. After this is all done, the player can start their journey.

It may seem like it takes a long time to get going in Adventurer League, but the process goes by really quick. There’s enough customization for the player to create a unique identity, but not enough for it to be overwhelming. It’s about the right amount for a mobile game.

Players always start their adventure in Adventurer League in the town of Auhert’s Beacon, but its what they choose to do with their adventure that makes the game fun. You could stick around in town and check out The Fight Pits, or maybe head by the local tavern and look for jobs that need done. Heck, it’s also possible to just head straight out of town and start roaming around the world.

No matter what players choose to do, they’ll want to keep in mind that Adventurer League is all about earning recognition. There’s a Fame stat in the game that increases the more players help people, participate in fights or complete tasks for local lords and village chiefs. Gaining Fame opens new doors for the player. Quite literally. Some lords won’t speak to a character with low Fame. There are also areas of the world map that are locked off if the player hasn’t gained enough Fame. It’s a good way to push the player toward jobs and fights early on.

Navigating the world map in Adventurer League is really simple. The world is divided into hexagons that the player can select to move their party around. Each move has the chance of a random encounter. This includes bandits, hostile wildlife and more. Unexplored areas are covered in darkness. However, there is a map that can be bought in the first town. It doesn’t get rid of the darkness, but it does give the player some direction for their journey.

Players that jump right into adventuring on the world map need to be careful. There is a food system and each move will take up a day’s worth of supplies. You can restock in any town and there are even pack mules that can be bought to increase the party’s carrying capacity. Keep a good stock of food because letting your party go hungry can damage their resolve.

When a character’s resolve is damaged, they will become more keen on the idea of retiring from adventuring. This can happen if they go hungry or get permanently hurt during combat. Let this happen too many times and the companion will decide its time to settle down. If the player stops by a tavern, they can let the companion retire in good will. They’ll take their share of the loot and will spread stories about their good times with your group. This will increase your Fame. If you try to keep the companion on for too long after they want to retire, they’ll get angry and leave. They still take their money, but then they spread bad stories about the group and hurt its Fame.

Players can also choose to have companions leave their party at any point during Adventurer League by stopping by a tavern. If a party isn’t made up of three adventurers, they can then choose to recruit a new companion. Each companion is randomly generate based on the above-mentioned classes and backgrounds.

Battles in Adventurer League play out on a hexagon grid system like the one used for the world map. Characters will take turns based on their initiative and turns can only be skipped by seasoned adventurers that don’t get antsy in combat. Each turn allows the player to either move or attack. There’s also rocks, trees and other obstacles that characters can take cover behind. It’s a nice strategy part of the game that makes player’s think about what to do before moving. Defeating enemies will earn the player loot, gold and Fame.

Players that aren’t careful in battle will end up getting their characters permanently damaged. As we’ve already mentioned, it isn’t good to let this happen very often. The simple nature of Adventurer League makes combat go by quickly. There’s no levels to gain or special moves to use. It’s just your brain against the computer. Players that need a little help can find better equipment in towns, but it’s uncommon and a bit pricey.

One of the things about Adventurer League that makes it such a great time waster is how easy it is to start and stop playing. The game autosaves all the time so that players can close it at a moment’s notice. There’s also a journal that keeps track of unfinished jobs so that players never have to worry about losing their direction between sessions. Plus, the game is super small. The whole thing is only about 2MB, but if offers hours of entertainment.

The graphics in Adventurer League are incredibly simple. There aren’t really any animations as characters just slide around on the map and battlefield. This doesn’t personally bother me, but I can see it being a huge turnoff for some players. It’s also filled with loads of text that describe what’s happening in the game, rather than showing it. This is something I enjoy, but I get that it’s not for everyone.

The audio in Adventurer League is a bit lacking. There’s no music in the game at all. Some sound effects are present, but even then they’re a bit sparse. I usually don’t keep my volume on while playing mobile games, but I’d still at least like the option of hearing some background music while I play.

Overall, Adventurer League is a great way to waste some time. It’s quick and easy to get into, has a lot of different quest options and is just a generally good time. Even if the graphics and audio are a bit lacking. I also almost forgot to mention that it’s completely free. No price tag. No in-app purchases. No ads. Now you really don’t have an excuse to pass it up.

Adventurer League battles its way to 4 GiN Gems out of 5!