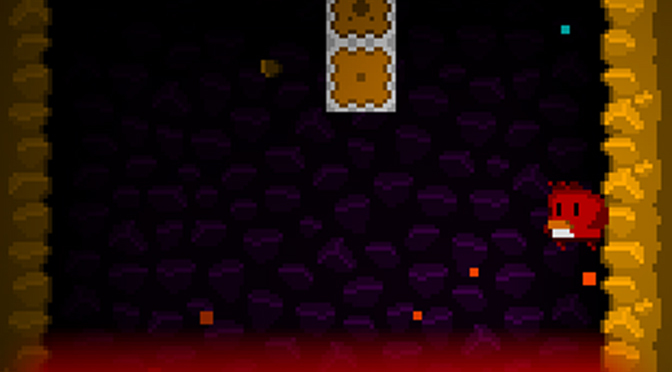 I was into yet another deep game this week with Abyss (Deep game. Abyss. Chasm. Yeah, I’m not as funny as I think I am.), a browser-based game that puts players in the role of a bird in a volcano.

There’s not much in the way of story to Abyss. A small opening cutscene shows several birds sitting around an open hole in the ground and one of them jumping in. It’s not established why the birds jumped into the hole, but it turns out to be a volcano. It would be way too easy to just fly out of the volcano, so our birds have to climb out instead.

This is where all of the gameplay of Abyss comes in. Players can control one of the birds and use them to jump up walls and outrun the lava raising up below them. Doing this is as simple as holding the Left or Right Arrow keys for movement and pressing space to jump.

Jumping up walls works almost exactly as it does in the Mega Man X series. Hold the direction that is facing the wall to cling to it. The bird will slide down the wall when not moving. Pressing Space to jump moves players up the wall quickly and they’ll have to dodge spikes, fireballs and other obstacles on their way up.

The whole concept of jumping up a long shaft to escape danger and clinging to walls had me immediately considering this game as a mesh between Mega Man X and the Metroid series. It’s not that this is a bad thing and the game is different enough in its own right to now be considered a clone. It’s just what I thought of. There are also comparisons that can easily made between it and Flappy Bird, but I’ll leave those alone.

I don’t think there’s an end to this game, but I can’t be sure. It seems like an endless game that has the player constantly working toward a new high score and I can only figure that is what it is.

The graphics in Abyss are wonderfully 8-bit and have a surprising amount of detail for what the game is. Dying causes birds to explode into bloody pieces. Sometimes a bird will start out injured and leave a path of blood behind it and on everything it touches. There are also several different colors of birds to play as, but they don’t change the gamepaly at all.

Abyss’ audio is limited to a few beeps and boops and a couple of songs. The two songs in the game are actually fairly catchy and are a good emulation of what one would hear during the 8-bit era. Having two songs in a game like this is actually a nice surprise as there is usually only a default track to listen to.

Overall, Abyss is a fun game that can be frustratingly hard and addicting at the same time. It’s free and worth killing some time with. Give it a try during your next lunch break or whenever you have some free time.