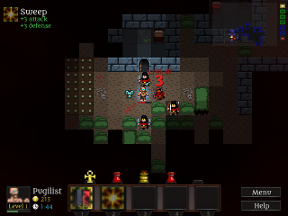 This week is a little different from my normal Time Waster. Imagine my surprise when Game Industry News’ own Chella Ramanan turns me on to an indie title currently in development called Cardinal Quest 2. Cardinal Quest 2 is a rougelike game that is being funded through the crowd sourcing site indiegogo.

Being a rougelike game, Cardinal Quest 2 is filled with dungeon crawling and leveling in the truest of D&D senses. Though not overly caught up in fine details as much as other RPG’s, there is still a huge level of satisfaction that comes from leveling a character and building their traits. The three original classes of Fighter, Thief and Wizard all make a return, and three new classes, the Ranger, Pugilist and Paladin, are currently in development. Each class has basic branching paths that make it fun to play through more than once just so you can try out a new build. The only complaint I had with the classes is that the Fighter felt a bit underpowered. He lacks the ranged combat of a Wizard and the stealth of a Thief, so taking lots of damage is a given, and sadly the health orbs that drop from dead enemies and act as his main form of healing are few and far between.

To go along with the fun yet simple character development, there is a basic inventory as well. One character can carry five spells and five usable items, such as potions. There isn’t an inventory for armor so what you wear is what you have. Equip something better and the old gear is sold right there and then. The simple inventory system is actually a relief as compared to other games that force the player to carry useless junk everywhere until a merchant is found. This all comes together to make a game that feels like a light version of D&D, which is perfect to jump in and out of at a whim, might I add.

The visuals of Cardinal Quest 2 feel like they were ripped straight out of the early nineties, which just so happens to be my favorite era in gaming. The simple over the top view and 2-D sprites come together to create a great feel for the game. Granted, Cardinal Quest 2 is using the same graphics as the first game, but if the crowd funding reaches its goal all new graphics are one of the many improvements promised.

Following in the footsteps of the visuals of Cardinal Quest 2 is the audio. While I enjoy the music of Cardinal Quest 2, it is worth noting that, just like the graphics, it is the same as what was found in the original and yet again is one of the many improvements promised if the indiegogo fund reaches its goal.

I for one am really excited to see the finished build of Cardinal Quest 2. The simple yet addicting game play drug me in and kept me glued to my computer for hours, and while I always make it clear that graphics don’t make a game, I’m never one to turn down an overhaul. If you enjoy the classic game Rouge and the many clones that have spawned from it, then you owe it to yourself to check out Cardinal Quest 2.

Even in its Beta, Cardinal Quest 2 earns a spectacular 4 GiN Gems out of 5!