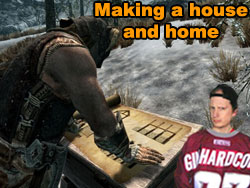 I’m 75 hours into Skyrim. To think of all that I have been through in those 75 hours: being a prisoner, fighting my first dragon, learning the voice that led to one of the newest Internet memes, learning the secrets of the Dragonborn, I defeated the World Eater known as Alduin, then joined the Imperials to defeat the Stormcloaks, joined the College of Winterhold and uncovered their secrets, and most recently joined the Dawnguard vampire hunters to vanquish Harkon.

Yet with all of that, and I must say again, going 75 hours into the game, there is still a lot to do. In fact, I finally encountered the talking dog that my fellow GiN staff kept telling me about. But still, I need a rest from all the exploring and questing. I need to do something to relax a bit.

Maybe build my own mansion?

I never really considered being a landowner while playing Skyrim, especially since I held two places of residence (Breezehome and my quarters in the College of Winterhold) but that was until I downloaded the Hearthfire expansion.

It all started with a courier offering me the right to change my Breezehome Alchemy Laboratory into a children’s room. I never thought I’d ever raise children in my home, but it was a start of things to come.
So on a trip to Hjaalmarch, and the capital city of Morthal, I spoke to the Jarl’s steward, who offered me a plot of land for 5,000 gold. I took it and explored my surroundings.

There I found a log pile, a drafting table and a workbench allowing me to build my new home. In time I started building the house piece by piece, until I found I was out of materials. Turned out I needed to start buying extra lumber at the sawmill (or cutting my own when no one was looking) and I had to buy iron and corundum ingots to make locks and fixings to finish my house.

Several hours later, my house was ready to go, and it was time to build additional wings to it. Since I was highly adept at alchemy, I decided to make one an alchemy laboratory, with another wing as an arcane enchanter with the third as a storage room for all of my treasure.

But then I look inside and find the house is pretty much empty. I need to furnish it as well. I decided to add a smithing station, a few display cases, racks for all of my weapons (aside from my trusty Dawnbreaker which never leaves my side) and even some trophy creatures from my experience fighting all around the world.

So it’s safe to say my third home is starting to look like my best one so far. I might move all of my things out of Breezehome and make this my primary residence. But still it feels like there are a few things missing. Maybe I should hire a steward to take care of it while I’m away? In fact, I could end up getting either my own personal carriage driver or a bard as well, all of which is possible in Hearthfire.

Even then, I might want to take this household ownership thing a step further into the family realm. Something else needs to be added to my Skyrim life. Should I look for a wife to come home to? Should I adopt some children and then tell them tales of all my adventures? Who knows? I might have to start a whole new chapter of my Skyrim experience. Kudos to Bethsoft for adding the possibility of true domestic bliss to a role-playing game.

One year since Skyrim’s launch, and there is still tons to do. I want to keep working on this house, perhaps add another addition or a tower, but that dang talking dog keeps pushing up against me, demanding that I finish his quest first. He’s terrible with a hammer, but he does help to keep those giants off my lawn…

Editor’s Note: Todd has great timing too, because Bethsoft just announced that Hearthfire was available for the PC. The English, French, Italian, German, and Spanish versions can be downloaded from Steam for $4.99.