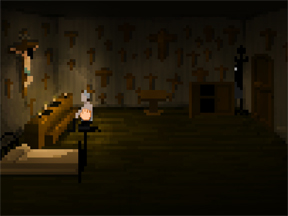 I know that I disappointed some of you when I didn’t continue my review of The Last Door last week, but now I’m here to make amends. During this last week I sat down, dimmed the lights and put on my headphone in preparation of The Last Door Chapter Two: Memories.

Chapter two starts out a lot like the first chapter of The Last Door did. Players are given limited control of a priest who takes to beating himself with a leather strap.

After that moment of awkwardness players are again given control of Devitt. Devitt has been seeing some weird images in his dreams and has started seeing a psychiatrist to try and figure out what it means. Most disturbing is the giant eye that stares at Devitt while he sleeps. Wanting to understand why his dreams are haunted by the eye, as well as why Anthony committed suicide, Devitt heads back to his old boarding school. This is the part where I stop talking about the story. Too many spoilers wait ahead. What I will say though is that H.P. Lovecraft fans are sure to enjoy the direction that The Last Door is heading (I know I do).

Gameplay in Chapter Two hasn’t changed much. Players will still have Devitt walking around and inspecting everything in an effort to solve a puzzle. The big change in Chapter Two is that Devitt will have to communicate with other people. The old boarding school he attended isn’t in service anymore, but it has instead become a hospital ran by nuns. I felt that interaction with other people made the game less scary. I didn’t have that ‘edge of the seat’ feel that kept me ready to jump all throughout the first chapter. Another new element to Chapter Two is memories (couldn’t figure that one out by the title). Players will lead Devitt through his memories of being a student at the school. This is the main way that the story is told in Chapter Two, and it also offers players some insight on solving certain puzzles. One thing that is a huge help to players is Devitt’s walking speed. Devitt was a little slow in Chapter One, which made backtracking a pain. While it’s not full on running, Devitt has an extra spring in his step during Chapter Two.

Graphics in Chapter Two haven’t changed from Chapter One. The game is really pixilated and isn’t likely to leave anyone in awe of its appearance. Much like the first chapter though, Chapter Two has loads of atmosphere. Creepy dark environments, perfectly placed sound effects and a beautiful soundtrack is what really makes The Last Door stand out.

Chapter Two is another great entry into The Last Door series. The story is great, the game has loads of atmosphere and Devitt walks faster (Thank goodness!). The only real complaint I have is that Chapter Two wasn’t near as nerve racking as Chapter One, but it does have a better story.