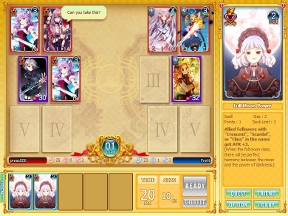 This week we’re going to delve into what I consider to be the best type of game in existence, Trading Cards Games (TCG)! I’ve let it slip here and there that I’m a bit of a TCG junky but now is the perfect time to embrace that part of myself, right? Right, so let’s get right into the action!

Sword Girls is an online TCG much like Magic: The Gathering or Yu-Gi-Oh. More so than monster battles Sword Girls focuses on the battle between…well what else anime Girls. The anime girls come from many different stereotypical anime settings. Maids, vampires, after school clubs Sword Girls has a little of everything even lolicon, yuck (I don’t understand how looking at girls that appear to be 10 and calling it lolicon is any different from pedophilia).

Of course not to be left out is the music found throughout Sword Girls. The happy upbeat tracks really fit the atmosphere of the game and add so much to it. When background music stops being background music and instead becomes something listened to without playing the game you know you did something right.

The idea behind Girls is that each player is represented by a Character. This character will act as the leader of the deck. These characters have a life total that must be diminished to win the game. Besides the Character slot we have room for five other cards on the battlefield. These cards are Spells and Followers cards. Spells are one time use cards that either help you or to hinder your opponent. Followers act as the fighters on the battlefield. Each Follower has a numerical value for Attack, Defense and Stamina. Attack is how much damage a Follower will do when striking an opponent’s Follower. The Defense of a card shows how much damage from an Attack will be blocked from getting through to a Follower’s Stamina which acts as life.

Sword Girls does a couple of things that are unique to the TCG genre. Starting off it drops the idea of a resource system found in many other games like Magic: The Gathering, Pokemon and Yu-Gi-Oh and instead gives us a resource limiter. The battlefield has a Size limit of 10. Each card has their own different Sizes based on power and abilities. So for example if I had a Size 4 card on the battlefield then I could play other cards that equal up to 6 in Size thus capping me at my 10 field Size. This applies to both Followers and Spells. Also to note is that when a Follower hits an opponent’s Character they deal damage not for their Attack but for their Size instead.

Another thing that Sword Girls does differently than other TCG is that each turn both players draw cards until they reach a total of five cards each. So for example if I play four cards during my turn then next turn I would draw four cards to get a total hand size of five cards. I’m not going to say that there is anything wrong with this style of card drawing but it does mean that Sword Girls is a game best played aggressively since the more cards you play the more you draw which allows you to cycle through your deck much faster to reach your stronger cards.

Here though is where we start to hit a sour note in the review of Sword Girls gameplay.

So far everything makes for a legitimately good TCG, but we have a few major problems as well. Spells in Sword Girls are a little unfocused to say the least. Most of the Spells found in Sword Girls that would give buffs or debuffs to Followers target at random. So let’s say that our opponent has three followers. The Stamina of these Followers is six, four and eight respectively. I have a card in hand that can give one Follower -4 to Stamina. Obviously I want my Spell to hit the Follower who only has four Stamina so I can kill it. Unfortunately I only have a 33% chance of actually hitting that Follower because the card targets one enemy Follower at random. This really hinders any kind of strategy that could have been found in Sword Girls as most Spells follow this same structure.

Another problem with Sword Girls is just how much luck is involved in the game. To go along with the unfocused Spells in the game there is also the fact that every turn there is a coin toss to see who gets to go first. I’ve had a few matches where the opponent got to go first the vast majority of the time which left me at a very unfair disadvantage.

Sword Girls is a beautiful game that has a lot of potential. Sadly Sword Girls gameplay can’t meet up to its appearance as the actual card battles of the game is unfocused, shallow and rely off luck to decide the winner of a match.

Sword Girls gets and unlucky draw of only 2 GiN Gems out of 5.