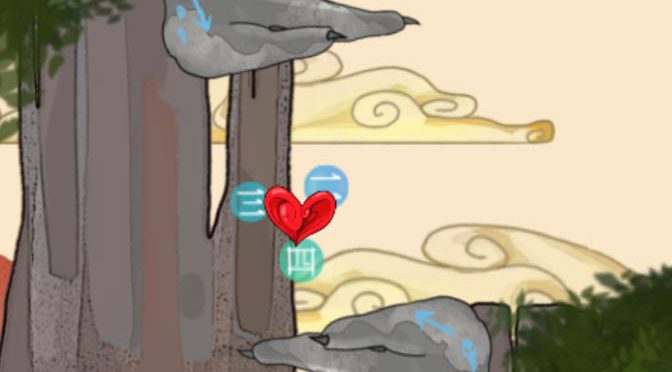 Hope everything is going well out there. I’ve been lucky enough to catch my first winter cold, but that didn’t stop me from wasting some time this week. Truthfully, it probably led to more time wasted. Either way, part of that time wasting was with Mellowdy.

Mellowdy is a simple adventure game with a focus on music. The game is all about a bard sending his love to a fair maiden. He does so through song and it is up to the player to deliver this love.

This has the player actually controlling a heart representing the bard’s love. The heart slowly falls to the ground when not moving, but will climb higher when the player moves to the left or right. There are various obstacles in the heart’s way, which means players will have to master these controls to get the heart where it needs to go.

The obstacles in Mellowdy start out simple enough and stay that way throughout all of the game. It’s never really about the challenge with this game. Instead, it’s about the journey. This includes the inability for the player to die. I could probably make a connection between this and the power of love, but let’s not get too cheesy.

One interesting aspect about Mellowdy is that the music builds as the player progresses in the game. It starts out with a simple drum rhythm representing the heartbeat. However, the player picks up more sounds as they progress through the level. This makes the song more complex and acts as a solid buildup to the end of the game.

One neat mechanic of Mellowdy is what happens if the player gets hit. This will cause them to lose one of the sounds floating around them, which causes the music to lose that sound. It’s a clever way of making sure the player doesn’t want to get hit, even though there is no death in the game.

The visuals of Mellowdy are simple, but work well for the game. It uses some 2D art for its presentation. Unlike most indie games, it goes for more traditional art, rather than pixel. I love sprite art, but it is nice to see something different every once in a while.

I don’t really feel that I need to talk too much about the music in Mellowdy. The gameplay itself is already woven into this aspect of the game and I’ve covered that. Just know that it has a nice melody to it. It’s relaxing and fits with the rest of the game’s themes, both in story and for the gameplay.

Overall, Mellowdy isn’t a bad way to waste some time. It’s simple and to the point, but in a good way. The game doesn’t take long to complete, maybe about five minutes max, but it is enjoyable the entire time. Go ahead and give it a look when you’ve got some time to spare. Maybe in between the endless amount of YouTube videos that seem so good at stealing away our time.