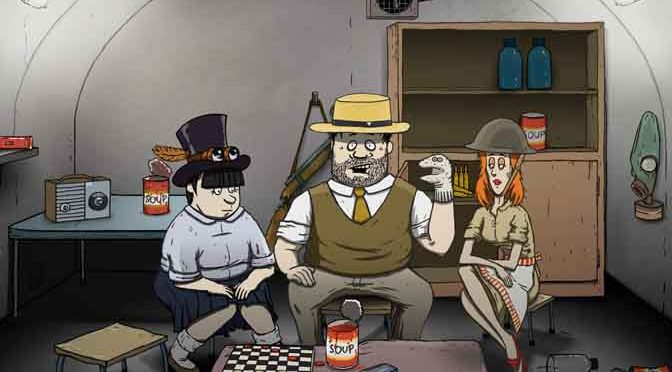 My time wasting this week was originally going to be on my smartphone, but I ran into some issues. I preregistered for the new Gundam Battle: Gunpla Warfare and was excited to check it out (I’m a big Gundam fan and have my fair share of gunpla.). It finally came out this week, but I can’t get past the tutorial. It just keeps crashing one me. That really sucks, but maybe a couple of weeks from now there will be an update that fixes my problem.

I was honestly a little lost on what I was going to do for the Time Waster this week. I’ve been putting some time into Dauntless, but that doesn’t really fit in with what the Time Waster is. Luckily for me, John hit me up with a code for 60 Seconds!

To start off with, I never played the original 60 Seconds! That means I can’t really point out any differences between the original game and this new version.  With that said, sorry if there was anyone hoping for comparisons like this.

60 Seconds! Reatomized is a survival game that takes place during an apocalypse. An advance warning system goes off and players have 60 seconds to collect items to bring with them into their fallout shelter. This can include food, supplies, equipment and even other family members.

The first section of 60 Seconds! Reatomized is a clumsy rush around the house to get everything the player can. However, the second part completely changes tone. It has players managing the supplies, equipment and people in the fallout shelter. It’s much more simulation at this point, which isn’t really what I was expecting and that caught me off guard.

So here’s my take on this twist: it works…well enough. The change in gameplay styles is a bit jarring and was a major disappointment to me. Due to this, I was initially waiting for the time where I would be allowed to head back outside for a short period and collect more supplies, but that never happened. Instead, I just sat around looking at a notebook for the rest of the game and telling everyone else what to do.

That’s not to say that 60 Seconds! Reatomized is a bad simulation game. It’s not. It just kind of pulled the rug out from under me is all. After getting over this initial shock, I found it to be fairly enjoyable. My biggest issue was just how much RNG the game requires the player to put up with. Outside of that initial collecting of items, there’s not a whole lot more that players can really do to affect the game directly.

Here’s the thing, 60 Seconds! Reatomized gives the player lots of choices. Do you answer knocks at the door? Gamble a stranger for more food? Maybe answer a phone that won’t stop ringing outside? There’s all sorts of options available, but at the end of the day acting on them could just be a bad thing or a good thing. It’s just a coin flip without the player being able to control any aspect of it.

Maybe I’m being a little harsh on 60 Seconds! Reatomized. Then again, maybe I’m not. I’m not here to knock the game and say it’s horrible or anything like that. I guess underwhelming is probably the more appropriate term. The basic mechanics of the game work well and I encountered no glitches. Plus, it did manage to take up some of my time in an enjoyable manner. Is that worth the $10 asking price from the developers? Not for me personally.

Overall, 60 Seconds! Reatomized offers a solid survival simulation experience, but it isn’t for everyone. I just happen to be one of those people. I didn’t play Fallout Shelter either and that’s because it never looks appealing to me. This seems to be similar to that, but both better and worse in different ways.