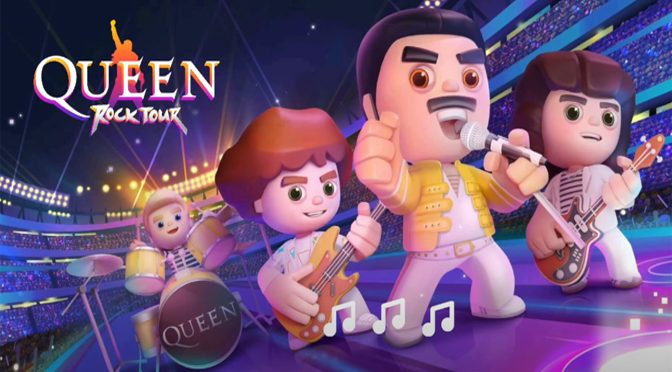 You sweet!? This is Sumroad, typing on the run to the “Underground.” It’s been a long week but I tell you lads! Good thing is… we’re here, and guess what? I have a special game today for you my family in the Modern gamer, just give me a moment to find a good spot in the train…There! Phew! So, I am in London, looking for clues, places and all I can get from of one of the most iconic bands of our time, I’m talking about Queen, short and easy, your majesty: Queen. 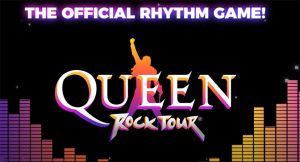 When I first thought about this trip, I really got myself in a pickle. First, my Britain English isn’t the best. In fact, I think I suck at it so you may find it jokes or dreadful but I really hope it’s the first one. Second, I like Queen but I’m not really a huge fan so take this into consideration while reading because I may not have all the insight and definitely not know ALL of the story behind the band, the music or whatever you may think of. Now kotch, put your best headphones on and set your favorite Queen tune because this is just about to start. 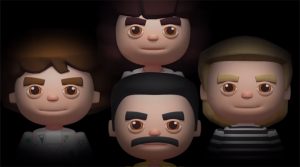 Perhaps you think about what brought you here in the first place. The band, and I don’t know about you, but I really like their music, it’s powerful in so many ways it is hard to choose one favorite song. Queen isn’t only an iconic band, it has influenced music and people over the years, inspiring them in ways I can only imagine. Anyway… life’s got really busy around the world, the majority of us have phones (duh!) and seriously, our lives are connected through this little device, we have our schedule, alarms, apps, games and a huge etc. right in the palm of our hands. But this is a gaming site which means this game is all about Queen (double duh!).

Queen: Rock Tour (QRT) is a rhythm game like Rock Band or Guitar Hero, only with Queen songs. The tutorial is pretty straight forward and as you can imagine it’s fresh to have Queen’s music to match. Either you tap, slide or hold or the combination or both. This part of the game is well done and I find it really fluent. 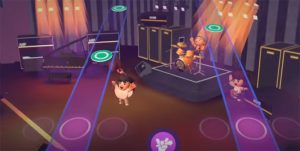 You will have to tune yourself and get the rhythm right to score high and make your crowd cheer for you hard, if you fail in one note, the voice or instrument will go silent and you will get it back until you score it right again. Now you’re a superstar and people in the room expects you to rock. The score scale is based on records, hence, the more records you score, the more stages you will unlock. The other in-game “currency” is the Queen Token, it’ll help you get more content. 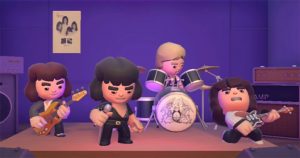 The UI is simple, the main screen is some sort of studio where you will see the members of the band in a cartoonish, chibi style, on the top corner you’ll see your tokens and records, below that corner is the Tour button, which is basically the stage selection screen. You will see your record-meter and the stages ordered by gig and year. On the left hand it is the Band button where you’ll get all the customization options for every single member…and you guessed right, you will find a nice collection of iconic outfits actually wore by Freddy, John, Brian and Roger. 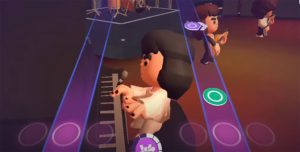 Next up in the UI there’s three buttons: from top to bottom: Rehearsal, which is the basic test mode; all songs are available but only in the easiest mode so you can get the feeling of the rhythm and pace. Then it’s Memories, and this is quite a sweet part of the game. These are unlockable content and it is basically Queen’s story piece by piece, not only facts, but also videos. I mean, this is great for everyone who wants to know about Queen in a fun way, shoo Google shoo! Next is the Achievement overview… do I have to explain this to you? Yes, maybe… Each achievement will show your progress and will grant you tokens upon completion so it’s another way to encourage you to keep playing. 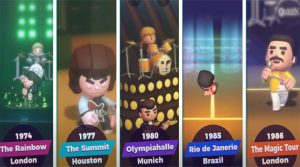 The free version of the game will take you to London for a 2-song round, which isn’t much, really, especially when Queen has more than just a few songs and I believe they could’ve gave us a little more to chew. You can also have the chance to unlock one outfit, the rest of them are locked until you get the full version, after that you will require to spend your tokens in more outfits. 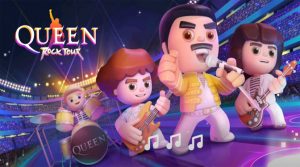 Same question as every single game I review. Is it worth it? The free version is just the hook, which, for me isn’t enough to open the wallet. The content feels good but slim for my liking, leave alone the cartoonish style which I don’t really like but maybe some of you do. Now, in my opinion, if the hook isn’t good enough to think about paying, then I just think about one thing, deleting it and look for another game. But I can tell you this, the game mechanics are good, and it deserves a good try by you, my gaming family. Please let me know your thoughts in the comments down below. This is Sumroad, waving goodbye from the Buckingham Palace, watching the Guard change, hoping you have an amazing gaming weekend, ta ta!