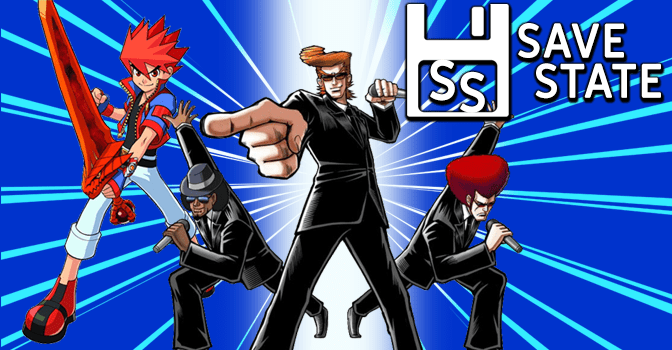 Welcome to Save State, where guilty feet ain’t got no rhythm. Coming in hot off the heels of April 1st, I’ve decided to do something a little different this week: This time, we’re going to talk about the last thing people would expect from the Save State column, rhythm games! In the last couple weeks I broke into some games that I hadn’t played for a while, just to briefly have some fun, and I found myself getting sucked into games like Elite Beat Agents more than I expected to, which coincidentally, that’s the first game we’re going over for this April edition of Save State. 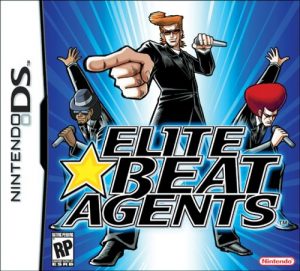 Elite Beat Agents is a western spiritual sequel of Osu! Tatakae! Ouendan, a Japanese rhythm game. In both games, players tap, drag, and spin icons on the bottom screen of the Nintendo DS, while the upper screen will show some comic-style representations of absolutely ridiculous events that the agents or cheer squad is helping someone to surmount. The main characters of Elite Beat Agents are from a fictional government agency whose sole purpose is to help people in need of it, so when a person screams for help because they can’t take it anymore, the Agents are dispatched by Commander Khan to dance and motivate the struggling individuals.

Effectively, you’re tapping and dragging icons in order to save the world. It’s insanely over the top and ludicrous from the very concept itself, but each individual story really only has the Agents connecting them, at least until the conclusion. The first few stages of the game start out fairly ordinary, such as helping a director make the next big Hollywood blockbuster, but later stages can be everything from helping a little girl overcome her unwillingness to accept her father’s passing, or literally fighting off a zombie apocalypse with the power of dance and the song Survivor by Destiny’s Child. The song choices range from “Very much a product of their time” like Sk8r Boi and Makes no Difference, some are outright odd, like La La by Ashlee Simpson, but some are super fitting, such as Highway Star being played as the background music for a pug that fell asleep on the bed of a truck that finds itself stranded hundreds of miles from home. Obviously, it bears noting that the songs in-game were covered by substantially less famous individuals, as getting the rights for Avril Lavigne, Sum 41, and The Rolling Stones songs would have been extremely expensive.

For the most part, the game is just good, silly fun. The gameplay is pretty easy to understand, as there will be numbered tap markers you need to simply touch with the DS’s stylus in coordination with the beat. There are also sliding markers that you need to roll a ball along a path, and large spin markers where you need to rapidly move your stylus in a circle and hopefully not damage your screen (press lightly, even if you’re on the hardest difficulty on Jumpin’ Jack Flash!). Circles move in toward the markers when you need to press them, and the closer you get the tap to when the circle overlaps the marker, the more points you get- so a low accuracy “just good enough” press might award 50 or 100 points, but a perfectly timed tap will yield 300 points. There’s a meter at the top of the bottom screen showing how close the player is to failing any particular phase- getting too many misses or low points taps, and depending on difficulty you may fail to motivate the unfortunate soul the Agents are trying to assist.

While the player taps away on the bottom screen, comic events unfold on the top screen (though you won’t be able to pay attention to these on the higher difficulties. At least, I wasn’t able to), and those scenes actually change depending upon your performance Each stage is segmented into parts so you can see some scenes play out, and the ending of the level changes depending on if you cleared all sections or not. You’re also ranked at the end of each stage, so there’s replayability in retrying stages until you get an S rank on every stage (which, S rank requires you get 90% or more of the beats as perfect 300s, and no misses whatsoever. It’s a daunting feat, to say the least. The final bonus stage on the hardest difficulty broke me, and I have never been able to S-Rank it, only A-Rank).

Each difficulty level gives you a different lead Agent, and beating the initial hardest difficulty unlocks the even more difficult Hard Rock! mode, where you play as the Elite Beat Divas, a cheer squad, instead. The wide variety of difficulty ranges made Elite Beat Agents a game that my wife could play and enjoy even though she never really got into rhythm games. Meanwhile, I decided to punish myself with Hard Rock! mode because I absolutely had to clear everything in the game, and found it to be a challenging, but fun, experience. Also, if you clear Hard Rock! you can unlock the bearded Commander Khan, head of the Elite Beat Agents, to replace the lead Agent of the Elite Beat Divas. He performs the Diva’s dance moves, not the male agents. It’s hilarious and was worth beating the highest difficulty for that alone, honestly.

That said, that’s only the first game on the docket for this week. While trying to think of a second, I screamed, “Help” and as if the Agents were answering my plea, a copy of Draglade fell off my shelf, which makes the perfect second game to touch on this week. 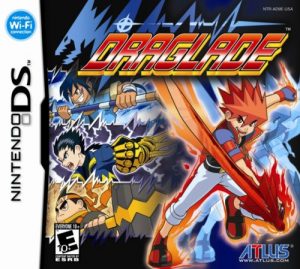 Draglade is a fighting game that decided the best thing to make it stand out was to puree rhythm games in a juicer and drink it like pre-workout. This is a very anime 2D fighting game with some story mixed in, but the story is effectively, “I want to be the best fighter.” For the most part, Draglade’s narrative is carried by the designs of the characters, and how friendly and accessible the game would be to children, since it is relatively simplistic. The story does ramp up into a different beast later on, though its effectively a Pokemon-esque Team Galactic style diversion where you go right back to the league and battle the Elite Four of fighting games.

The actual gameplay of Draglade, however, is where it differentiates itself from its peers. During battles, you have light attacks, heavy attacks, low and high attacks you can perform by pressing up or down, and have a special meter that fills over time that lets you expend bullets, which are effectively magic attacks that can you swap around on the bottom screen, which can give a variety of effects. Draglade isn’t a standard anime fighting game, however. Your special bullet attacks are found all throughout the adventure and all have a wide variety of effects, and your health and special meter can actually expand throughout the game, letting you use more powerful bullets in succession, and the RPG elements such as level ups continue to increase your health as you progress.

Then there’s the whole rhythm element of the game, the beat attacks, which you can perform by expending meter and pressing the L button. Beat attacks make musical notes appear on a staff at the bottom of the screen, and if you attack in time with the notes that appear then you’ll deal much more damage than you normally would. You can even customize your beat combos to be more your liking, as you can design them with strategy or ease-of-use in mind, or you can be like 19 year old me and make your character’s beat combo the first notes of the chorus of Rick Astley’s memetic song, “Never Gonna Give You Up.” I completely forgot about that, so it was a pleasant surprise to fire that off in the middle of a battle after returning to a fourteen year old save file.

Your meter gets expended while you perform a beat combo, and if you run out of meter while you’re doing the combo, it’ll just stop partway through, leaving you depressed and probably swinging at the air. So you can set up longer beat combos to get maximum damage output off of enemy openings or to most adequately copy meme songs, but you don’t really need to be super creative with the beat combo synthesizer if you just want to deal damage and move on with your life. Since the same meter determines how often you can fire off bullets as well as the length of your beat combo, there are balancing elements to consider when choosing the right beat combo length and what bullets you bring with you into battle.

The battle arenas in Draglade can have some obstacles, gimmicks, or traps, such as a water spout that will launch a character that touches them so you can push a foe to the corner to get an easy launch. Not every arena features such a thing, and many of them are simply flat, 2D planes with a different backdrop, but the changeups are appreciated every so often when you encounter them. For the most part, though, you’ll be attacking, firing off spells, and using beat combos off of openings to deplete opposing health bars and move on to the next story event. The combat itself feels very responsive and the controls make sense- whacking opponents with your sword or fists then firing off a spell with the A button works quite well.

Character animations in Draglade are extremely fluid, with even basic idle cycles featuring swaying hair, and the like, which is very nice to see on a DS fighting game title. Animations are typically very important for games with fighting game-like systems, though a lot of budget titles tend to skimp on the animation frames for other things, so it was nice to see Draglade go a step further in that department. The music is pretty generic in the, “Average chiptune” kind of way, with many of the tracks being pretty unmemorable. The track that plays during battle intros is probably one of the catchiest songs on the entire OST, but that’s largely just nitpicking at this point.

In Draglade, while each character’s stories are pretty short, there are four characters with pretty different stories and set pieces, and each one has a different final boss, so there is value in playing with more than one character, too. Because of all this, Draglade is probably one of the most unique 2D fighting-RPG titles I’ve ever played. The closest game to which it could be compared is probably one of the 2D Tales of games, like Tales of Phantasia, though Draglade is a bit simpler in execution. Summon Night: Swordcraft Story might be a better comparison overall, due to the sheer character customization aspect alone.

Also yes, I realize that bringing Draglade up is kind of a cop out when the initial idea was to go over rhythm games, but it’s legitimately one of the most overlooked games I’ve ever played with RPG mechanics built in, so for the purposes of this column, the beat combo system counts! That said, this edition of Save State is coming to a close, so join us in a couple weeks when I will again talk about old games and shake my fists at clouds.