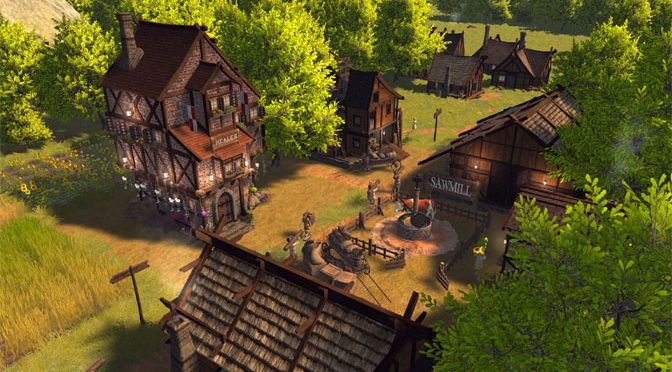 Before jumping into this review, I should probably admit that this particular style of game isn’t one that I particularly like to play. I’ve always found city builders somewhat tedious; I manage resources in real life, and I prefer not to have to do the same for leisure. I don’t even particularly care for Settlers of Catan, so going into Patron, there was already a bit of loin-girding. That said, I do like political intrigue games, so my interest in the much-vaunted social dynamic system provided a counterbalance for my general distaste for city-builders. Ultimately, the social aspect of the game didn’t quite shine enough to outweigh the resource management mechanic for me personally. However, if this sort of game is your jam, boy, have I got the game for you. 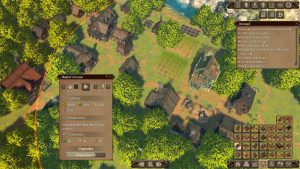 In Patron, you take your five colonists and start a new settlement. Patron gives you the option to select your settlement location, ranging from a volcanic island to grasslands, and you choose based on your intended level of difficulty. Once you’ve picked your new territory and a flag, you’re off to the races with your settlement, Jamestown. Your first concern will be housing your colonists, and in the initial phases, you gather most of your food and resources from the surrounding area. You use them to construct buildings which provide items necessary to your survival, and the first winter will be critical to the success or failure of your town. After that initial survival, you’re going to have to pay more attention to the world’s social dynamics. Classes eventually develop, and each class will have different needs for which you will have to provide. Then, you have to interact with the mainland in the form of a king who speaks directly to you via pop-up.

Patron is currently only playable in sandbox mode, which is perfectly fine, but that means your “success” will be entirely subjective to you. You may not notice it initially in your mad scramble to keep your town afloat. Failure, however, you’ll recognize immediately. 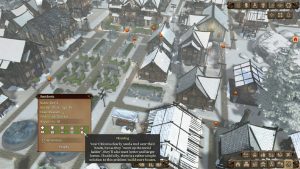 The developers provided some helpful tips along with the Steam code for this review, noting that one should focus less on expansion and research in the initial stages and more on maximizing the utility of the most useful buildings. I attempted to follow this advice, but in so doing, I expanded too far during my first playthrough. While my town survived that first winter, we were out of food by March, and no matter how I scrambled to salvage the settlement, there was nothing I could do but watch my pixelated peasants expire. That brings me to my first real point about Patron. It’s hard and unapologetically so. If you make a wrong choice, there’s almost no way to recover. I suspect that for some players, the difficulty is part of the appeal; Patron is clearly a game for players who prefer a challenge. I found the learning curve to be unnecessarily steep. 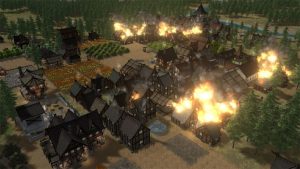 However, the difficulty level does not particularly set Patron apart from what is an admittedly saturated market. The angle that Overseer Games has emphasized is the game’s social system, which is essentially a class system. While the game skates along the edge of the more negative aspects of same, you will find yourself juggling conflicting demands from different groups of people. At a certain point, the king will get in contact, and the crown will add requirements that you’ll need to accommodate while keeping your population content. It’s a new and interesting mechanic that admittedly needs a bit more development as there are occasions when it just doesn’t add much to gameplay other than one more thing of which you have to keep track. However, you do have to stay on top of it because starvation isn’t the only way to lose citizens; unhappy citizens will move away, leaving you without valuable workers. There’s possibly a metaphor there. 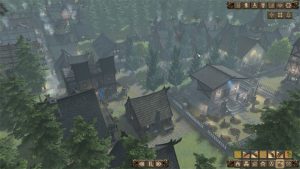 Patron’s other distinguishing feature is the skill tree, which is both elaborate and deep. The game reminds you that Patron is a game about establishing supply lines, and the skill tree is an integral part of doing just that. The tutorial reminds you that your people will need coal to heat their homes in the coming winter, and it’s up to you to figure out that in order to have coal you’re going to be doing a great deal of research. You’re going to need to research a quarry, which then unlocks the research step for mine. Then, there’s the matter of building said mine and having enough citizens to staff it without sacrificing other important resources like, say, food. Still, if you have the time and resources, the skill tree offers hours of exploration, and players who know what they’re doing can create fantastic things within the world of the game. 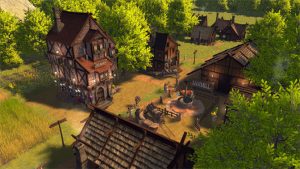 However, the skill tree doesn’t always make sense. While you do have the option to pursue an entire tailoring tree, at no point do your citizens seem to need new wardrobes, no matter the season. While I suspect additional updates will close that little loophole, I found its presence very odd in a game so lovingly devoted to minutiae. Similarly, none of your citizens will actually follow the roads and paths you construct, even though constructing them provides you with speed bonuses to production and construction. I found the visual effect of wandering citizens jarring when the rest of the game is just so pretty.

Patron is certainly no slouch when it comes to graphics. The textures are lush, and in some places, they can become overwhelming. For example, when gathering trees, you have to direct your citizens to the trunks in order to harvest the tree. In heavily forested areas, finding the requisite trunk was unnecessarily complicated by the visuals and could have been addressed via a simple camera tilt. Unfortunately, that’s one of the few features Patron lacks, so you get to do a bit of repetitive clicking trying to find the exact square to harvest that particular tree. 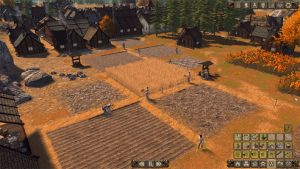 However, that’s a relatively minor complaint, when Patron’s greatest drawback is just how much you’re meant to juggle. In a certain sense, Patron tries to do too much without offering you an easy way to keep track of all the different balls you have in the air, especially when decrees come into play. Yes, you have a resource window, but you also have to keep track of variables not present in that window by clicking on various buildings, including the town hall. The overall effect is a GUI that’s a touch on the clunky side, which becomes a major barrier to gameplay when the smallest error can lead to starvation, disease, and death in Jamestown.

I did like how Patron handles time. It constantly runs at a set rate unless you speed it up or slow it down. That’s a nice feature when you’re waiting for your coffers to replenish before you initiate more research or an expansion project. I have no doubt that other players never had the issue with generating coins that I did, but if you do run afoul of an empty treasury, the game settles into a hurry-up-and-wait debacle that ultimately results in, you guessed it, mass starvation. 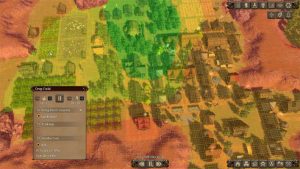 You also have a wider latitude when it comes to customization. The tutorial points out that you should remember to beautify your town to bolster population happiness, and you’re spoiled for choice in terms of how you beautify the area. For folks who delight in creating cityscapes to their own exacting specifications, Patron will certainly scratch that itch. Considering the game’s graphics, I can certainly see the appeal.

Patron’s developers have assured us that mods and other tweaks will be supported, and there will be a wealth of new content to expand gameplay. As such, Patron is rife with promise, even if there are some minor quirks at this early stage. For $20, it’s a great game if you want a city-builder with teeth. Maybe with a few more settlement iterations, I’ll get the hang of it, but I don’t know that I’ll ever really be a fan of Patron, through no fault of the game. Your mileage, however, may vary. 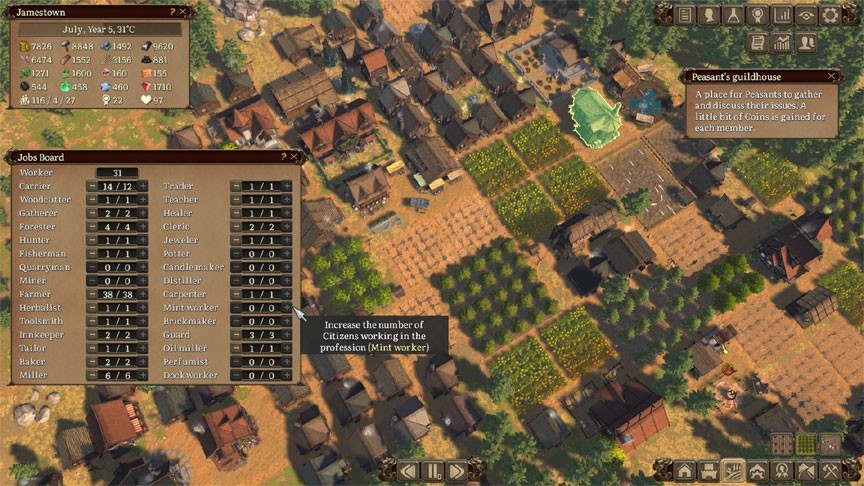