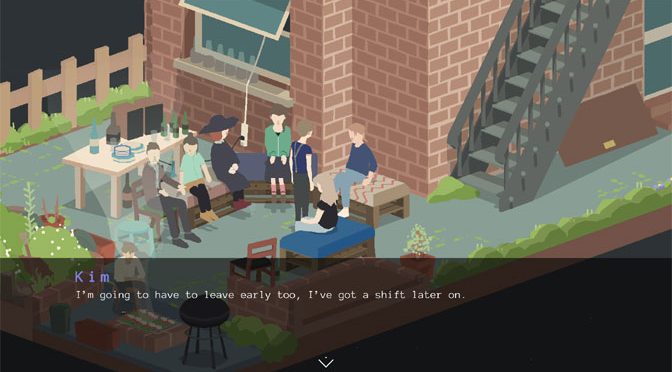 Before I get into the review, I should explain that even though you may know me best from my Star Trek column, I’m a long-time gamer, and I’m dipping my toes into the Modern Gamer feature. I prefer MMOs, RPGs, and puzzle games generally, but I’ll play just about anything once. If you have read my Star Trek column, these articles will feel very familiar, if focused on the “Stray Thoughts” elements. I hope you enjoy! 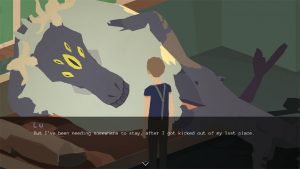 The semi-biographical “No Longer Home” is, as the title suggests, a game about transitioning between one stage of life and the next. Characters Ao and Bo have finished college in London and are packing to return to their respective homes, Bo to his parents’ somewhere in England and Ao back to Japan. Both characters are non-binary and therefore face even greater hurdles in integrating not only back in their respective natal homes but also society as a whole. 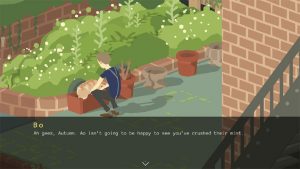 Game play is point and click, so everything you do, from navigating their small college apartment to cycling through dialogue options involves a click. There’s so, so much clicking to get through even the most basic of actions, y’all. You interact with items around the environment, including cats and an Unknowable Geometry, which is possibly the most pretentiously named game element I’ve yet seen. Each item affords you the opportunity to learn more about Ao and Bo’s lives, both externally and internally. You do get the opportunity to play as both Ao and Bo, and of the two, I found Ao’s story more intriguing. The art style is that familiar low-poly style that you see in Untitled Good Game, and it does work for “No Longer Home,” especially as the main characters struggle with finding and defining their identities. You rotate the room environment you occupy using A and D and reveal additional objects with which you can interact. Scenes and locations shift as if they are set pieces on a stage, which is a nice touch, but over time, the game does begin to feel claustrophobic. The sound design is overall solid and does contribute nicely to the game’s atmosphere. 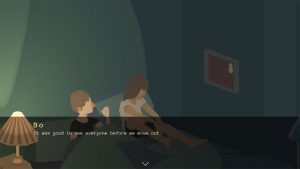 Story-wise, “No Longer Home” centers around Ao and Bo living out their final few weeks together in that apartment, saying goodbye to the places, friends, and relationships that have shaped their college experiences. Mind the content warnings because both Bo and Ao suffer from depression to a greater or lesser extent, and that, much as it does in real life, impacts everything about the game. That depiction of depression feels very accurate as do the characters’ respective struggles with their non-binary identities. Just be ready to experience some major executive dysfunction by digital proxy. 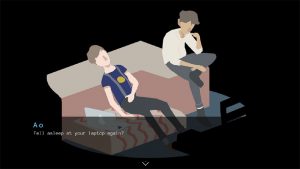 All of that said, I am very clearly not the target audience for this game because I mostly find both Bo and Ao frustrating and self-indulgent. Yes, they are living through an incredibly bittersweet and difficult transitional period, and yes, they face the larger unknowns of what their lives will be in the future and whether the relationships they’ve built will remain. Those are difficult and heavy topics to confront. However, both characters spend a great deal of time moping, and that does not for an entertaining game make. I have lived through most of not only Bo’s experience but also Ao’s and come out of it. As a result, playing “No Longer Home” feels very much like I’m looking backward at an unfinished version of myself with which I can barely identify. Beyond that hurdle, the game is very, very slow , focusing on atmosphere and bigger ideas than gameplay. “No Longer Home” does feature some supernatural elements, including a bizarrely lazy monster, to keep your interest, but no matter how cool a creature Lu might be, it just couldn’t sustain my interest. 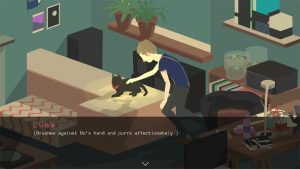 I do like that the game focuses on non-binary characters of which we have far too few in any space and especially in gaming, and the best moments in the game occur when the characters wrestle with that aspect of their respective identities. Ao gets a great line when they comment that cooking doesn’t have to be gendered, which is a valid observation that happens to be dripping with their own brand of bitter life experience. It’s both a great character moment and a commentary on the larger world in which Ao, Bo, and we as players live. Even the exploration of the emotional realities that surround these transitional moments in our lives is well done. I just have very little desire to replay that period of my life in a video game. Your mileage may vary. 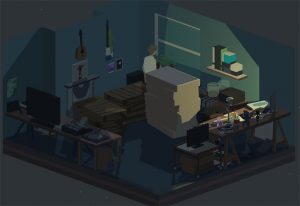