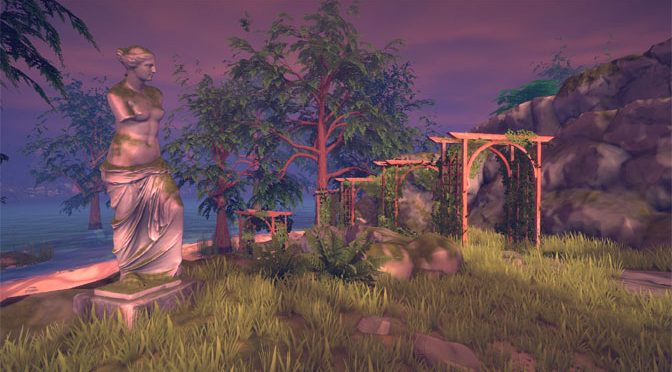 Ghost on the Shore

You play Riley Swallow, a woman whose “Eat Pray Love” journey goes a bit sideways when she shipwrecks on the Rogue Islands. There, she encounters Josh, a ghost who remembers little of what it was to be alive. Riley and Josh explore all three islands, exploring the islands’ histories via both the detritus left behind by the vanished inhabitants and visions of the past. Josh has story-convenient amnesia both as to why he’s a ghost and why he remains confined to the three islands. It’s up to you, as Riley, to heal his amnesia and potentially free him from that which binds him to the Rogues. 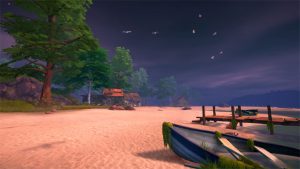 Going by the plot summary above, you might that Ghost is a simple game, and it both is and isn’t. The first thing you should know is that the game involves mostly the characters of Riley and Josh, and there’s a very real sense that Josh isn’t present so much as a voice in Riley’s head. The two of you explore the ruins of the islands, investigating items marked by glowing blue spheres and trying to piece together the islands’ history. 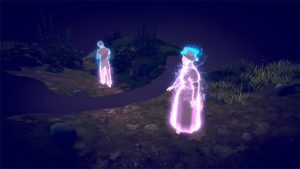 Ghost isn’t an action-packed game; you literally wander from point to point by following glowing footsteps and talk to Josh and occasionally other specters. The dialogue options usually require you to choose between two or so options, and while you’re never at risk of dying, your choices determine how the story unfolds. Ghost offers multiple endings in addition to additional achievements for finding and unlocking all of the objects, but depending on the ending you discover, I can’t guarantee that Ghost offers much in terms of replayability. Part of that is because Ghost relies strongly on its mystery to keep you engaged. Ghost’s pacing is slow at best and glacial at worst. Thus, once you’ve managed to unravel the mystery, I can’t imagine anyone other than the hardest core of completionists starting over. 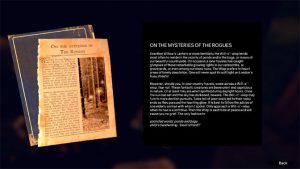 That said, Ghost is very much a worthwhile exploration. A great deal of that is because the game focuses so strongly on the relationships between the characters, and even the less developed character feels very real. Even more, the game gives the impression of being an exercise in collaborative storytelling. Your choices determine the outcome in a predetermined world, which is an exercise in which I found myself surprisingly engaged. 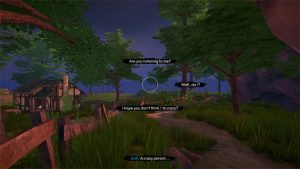 Ghost also has an interesting relationship with time. You’ll wander through various ages because Josh has apparently been interacting with the living for quite some time, but given the setting, the time slips feel even more surreal. The game plays with that aspect, allowing for a key transition later in the game, at least as far as the ending I experienced goes.

Ghost is a short game, not even three hours long, so I don’t want to drag out this review, but I do think it’s important to note that Ghost is ultimately a story about trauma. Riley flees her own trauma. Josh must make his own peace with his. Some of that trauma is intergenerational, in terms of what Josh experiences, and some of it, Josh causes. The question the game poses is not one of guilt or innocence but rather how to move on from the consequences of choices—our own and those of others that impact us. In that sense, Ghost is a harder game than the format might imply. 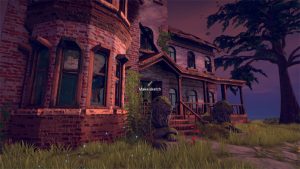 I’d argue that Ghost isn’t a game for children both due to some adult language and the general themes. Depending on the ending you get, Ghost could potentially be disturbing for younger viewers.

I will say that if you can’t sympathize with either Josh or Riley, you’ll never make it through the game. Fortunately, the voice acting is engaging enough that I wanted to explore the islands with both Riley and Josh. Riley often comes across as a bit brash, but Josh’s calm often belies some very deep emotional issues. 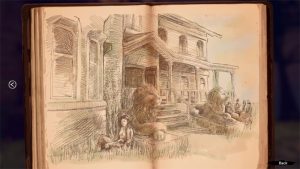 Ghost is an interesting game, and it benefits from being played in a single setting. If you’re pressed for time, you might want to look elsewhere. However, if you want to sink a good two hours into Josh’s story, then the game would prove worthwhile. That said, Ghost on the Shore retails for $20.00 on Steam, which seems a touch steep for three hours, but given what we spend on a two-hour movie, it’s not entirely unreasonable.