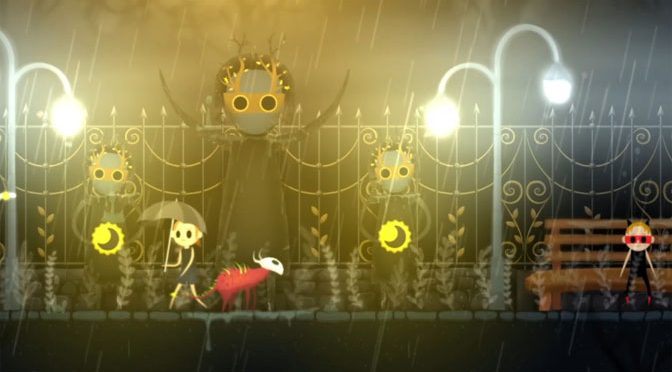 Good morning ghost and ghouls! It’s another fabulous Saturday morning with the hostess with the mostess, Modern Gamer! Today we have a creeper of a game called The Guise. It’s got so much creepiness it’s hard to contain in this 2D platformer. So how cool is it that we can play on Halloween?

So we start out with a small story. An All-Father leaving behind 12 immortal guardian kids behind after vanishing. This of course happened thousands of years ago. The kids have duties to attend to like caring for the inhabitants of a divided world. This is where it gets messed up. Most of the kids get in a fight after a while and start taking it out on humanity. Playing themselves out to be little gods and goddesses. The world was turned upside down. Think mass dark ages. Then it fades to black. 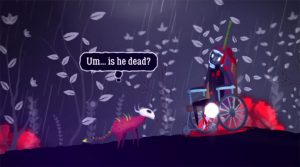 We fade back into an orphanage of all places where the head mistress, Lady Mallory, comes out of her room and tells the kids to behave. There’s also a sign on the head mistress’s door with a big skull and bones on her door. An obvious indication to tell everyone to keep out. Mallory leaves, the kids notice the door open and they go in anyway. Rudy, kid in yellow, is like “Welcome to Mallory’s lair, where no mortal shall enter!” This place is hella creepy. I don’t know why Ogden is like oh it’s only kinda creepy in here.

No no. It’s not kind of creepy. Let me tell you it’s like a damned monster’s cave in there. There are eyes everywhere, and a cauldron that’s on an open flame. I mean it’s from one extreme to the other. 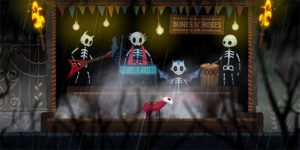 The kids spot a mask and one of them is dared to put it on, and when he does, Ogden turns into a horrible looking pink monster with green spikes. He wanders out the orphanage and then is outside somewhere. This begins your strange and sometimes frightening journey as Ogden, now transformed into a monster. 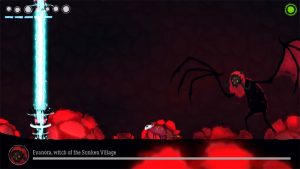 Ogden wakes up outside in what looks like a storm. We move forward running into a monster and bam! Here comes Mallory with a scythe to knock out the beast. After getting a well-deserved scolding she helps you out and teaches you how to use your new abilities. She tells you to come back to the orphanage and you head the opposite direction.

This game reminds me a lot of Gonner, which was the first game I reviewed for GiN, and also Limbo tied together. The art reminds me of Happiness and Cyanide and Coraline put together. Seriously every time I see those eyes it’s creepy enough to make me go egh! That’s a feat in itself. Well played. 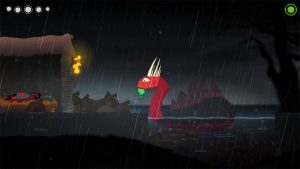 The art for The Guise is absolutely amazing and the animations are of course gorgeous. This is even more impressive because the physics on this platformer feels very natural and responsive, like Sonic the Hedgehog or any other good 2D platformer. I personally love when games have great controls, because not all of them do. The Guise does, making it both fun and very playable. 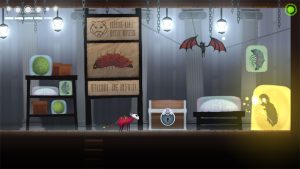 The overall experience of The Guise is really fun and enjoyable. So is the storyline. The kids’ eyes just creep me out. Also I would like to mention that this is not for the faint of heart. It’s pretty bloody. You’ll come across some zombie-like enemies too, that come at you with a tree saw to try and kill you. They even have a Jason mask to top off the Halloween fun! I think what I like most about this game though is the character design. I used to see these kinds of designs back in the early 2000s. I’m glad to see the, coming back in such a fun way in games like The Guise.

Alrighty folks, that concludes another Modern Gamer review and this year’s Halloween Special! Have a spooky good time and enjoy Halloween with The Guise, even if you’re still quarantined. It’s available for a very reasonable $9 on Steam. Modern Gamer out!

Check out linktr.ee/delerias for more of what the Modern Gamer does outside of work.