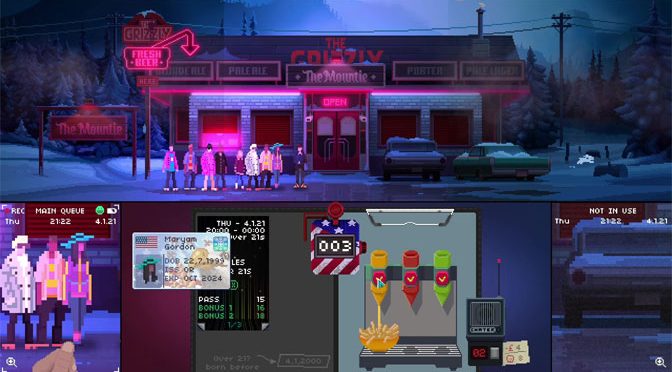 Did you ever want to play “Brazil: The Video Game?” That’s sort of what “Not Tonight 2” feels like, so if you’ve ever had a strange desire to experience what it would be like to work in the DMV while the world crumbles around you, “Not Tonight 2” is the game for which you’ve been waiting.

I discovered that I was not the game’s target audience, which isn’t to say that the game had no redeeming features. I found the messages to be timely and compelling, but the gameplay was less so.

Still, there’s enough to “Tonight” that the game merits a second look. 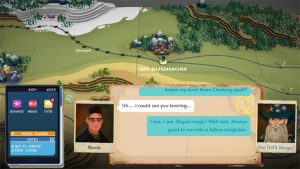 “Tonight” takes place at some point in America’s future when the country has fallen into steep decline. You and your friends, a crowd of mostly black and brown people, protest outside a bar in Seattle. A van drives up, and the officers within kidnap one of your compatriots, Eduardo, to transport him to some sort of prison camp located in Miami. You and your friends must now find Eduardo’s citizenship documents and cross the country in order to free your friend from this modern-day gulag. 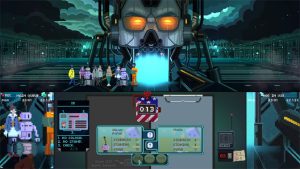 Along the way, your chief means of support—i.e., food and gas money—is that you take odd jobs working as a bouncer/ID checker in bars, which are the institutions that apparently remain standing in this dystopian hellscape. In all fairness to “Tonight,” that’s probably a fair prediction. You will have to work at what feels like every single one of these establishments for pennies in order to advance the group along what is an entirely linear story. Now, yes, the ID checking is meant to be entirely boring, but as you move along, you do get the option to do different kinds of scans, shake down would-be patrons for contraband, etc. Panic Barn has therefore incorporated enough different challenges into the ID checking to keep the tedium at a tolerable, if not enjoyable, level. Some of these challenges make sense given the current climate—such as checking prospective clients for a virus. Some of them make slightly less sense—checking over chickens in a slaughterhouse. 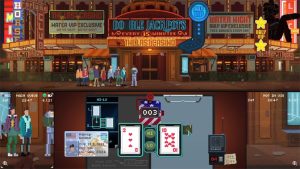 You work everywhere from bars to rodeos to, as noted above, slaughterhouses on your journey across a dying America, and make no mistake, everyone and everything in Tonight is dying. New York City is under water. LA has polluted its air to toxicity. The Midwest is in the throes of an epidemic, and the South, apparently, has work camps. The world Tonight gives us is hardly charming, but it is lovingly rendered. 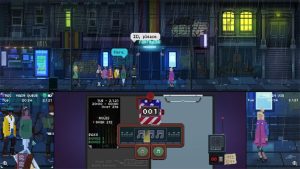 You will play three different characters over the course of the game: Mari, Malik, and Kevin. Each character chooses a different task to help prevent Eduardo’s deportation. Kevin searches for Eduardo’s passport, while Malik traces Eduardo’s family tree. Mari remains in Seattle to provide whatever virtual support her friends might need. Regardless of assignment, each character will have to use the gig app Bouncr to pick up gigs in order to fund their rescue mission. Unfortunately, as you play through the game, the app will incorporate various minigames that will create time constraints and obstacles that complicate your accomplishment of the duties assigned to each character by each new boss. 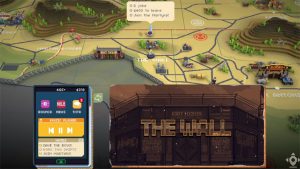 Tonight is, mercifully, a rather short game, around eight to ten hours. I say mercifully because the game is actually about paperwork. It’s classed as a paperwork simulator which is a word combination I never, ever thought to encounter, but I’m coming to learn that much like subreddits, there’s a simulation for just about everything. While the gas station and bus simulators eventually won me over, Tonight did not.

The reason, aside from the weirdly basic stereotyping, was that in addition to spending most of your time checking paperwork, you do have to navigate dialogue options that can and do harm to your health and morale bars seemingly at random. I never figured out what exactly about a given choice meant that it would cause catastrophic harm, nor did I reliably figure out the vague and amorphous objectives that you’re meant to accomplish in order to refill those bars either. 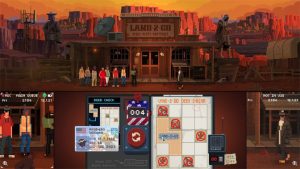 I did enjoy the fact that Tonight splits the gameplay among the remaining three friends as each selects a different task in order to save their friend from deportation. Their goals are different, resulting in slightly different dialogue options among the three of them. I chuckled at the implementation of an app that would allow people to find gig work. That’s so true to life as anyone who’s applied to work for Fiverr or Doordash will tell you. I even appreciated that the game took on the task of lampooning the casual racism that exists throughout America. Panic Barn has taken on that arduous task with a truly bizarre type of gallows humor.

Remember I mentioned that you spend some time as an ID checker for chickens? Well, like their human counterparts, these chickens have their own IDs and designations that appear on an “exclusive guest list.” The problem with the guest list is that those chickens are heading off to experience not velvet ropes and overpriced drinks so much as a quick death and processing into cutlets. The game has the funny moments, but the humor is always dark, which is one of the reasons why Tonight reminds me so viscerally of Brazil. 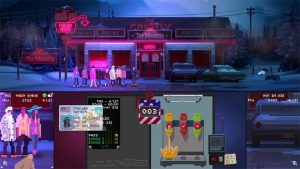 Another reason I think of Terry Gilliam’s masterpiece is that the game opts to set the characters as bouncers. As such, the characters and thus the player remain on the outside of the society the game wishes to explore; you never join the party. You’re stuck as an observer at the door. Gilliam plays a bit with that kind of separation in the film as a metaphor. The same is true with Tonight. You’re meant to feel like an outsider because the game establishes that you are excluded either due to race or age or other fundamental characteristics beyond your control. It’s a clever conceit, and though I appreciated it as an artistic decision, as a player, I would have liked to have seen more of the events going on beyond the door, though I certainly got my fill of gallows humor.

However, none of that humor or even the overarching messages underpinning the gameplay really make up for the fact that the dialogue options feel very arbitrary, and the minigames seem very contrived. Tonight certainly has promise, and if your humor tends toward that particular brand of strange and dark, you’ll love the game. 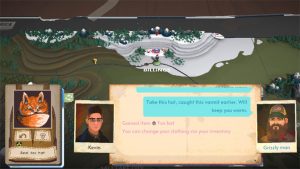 Not Tonight 2 is a paperwork simulator that puts your characters in the position of taking gigs as bouncers in order to fund a massive, desperate road trip to prevent your friend’s unjust deportation by American officers. The game runs about eight hours, and yes, you will spend each of those eight hours checking IDs and navigating paperwork-related minigames that create arbitrary time obstacles to create a sense of urgency that the game itself undercuts.

I found that giving myself various breaks between chapters enabled me to slog through, especially since remembering controls is of lesser importance in this particular style of game. Plus, the time away give me ample opportunity to reflect on the game’s particular brand of humor, so I caught more of the jokes than I might otherwise.