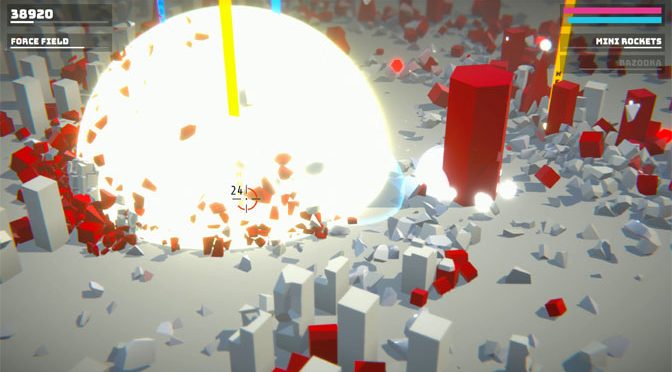 Hey there game fans! It’s another fabulous Saturday here! I hope you guys have had enough turkey and great shopping deals. I know I have. But just in case you need something for a stocking stuffer or just for yourself (there’s no shame in it) check out Destropolis!

Ok, so this game is pretty straightforward. There is no story to this game, just some controls, and good ole destruction. If you’re a person who seriously needs to do some first-person shooter action, then this one is easy to pick up. In fact, if you want something different in a shooter, Destropolis may be the game for you. 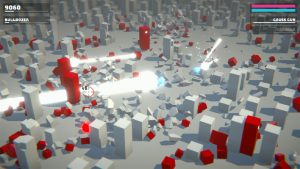 So what did I mean by there’s no story? Exactly that, there is no story, a game that’s purely plug and play. Though I would check out some of the controls first. How do you play it? Easy. Your controls are the left and right and joysticks, then the right trigger is your shooter. The left joystick controls where you go while the right helps you aim. The right trigger is, you guessed it, the shooter. That’s what you start out with. 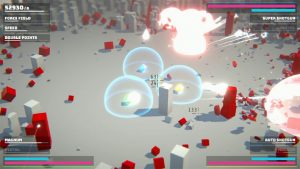 But I’m getting ahead of myself self here. What does the game actually look like? You are on a whiteboard with different sized pillars on it. You are the blue diamond moving around on the board. In the meantime, there are all these red blocks rolling your way to destroy you. Therefore your job is to destroy as much as you can, however fast you can. It’s really great for testing reflexes. I know you’re thinking it’s easy. Let me tell you it’s not so easy when you start out. One of the things that’s nice about all this is that you gain some pretty awesome attacks in the process. You just have to go and pick them up. I promise you it’s not as easy as it sounds. 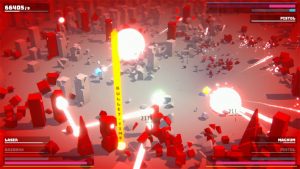 What kind of attacks do you ask? Oh well, you start with a shotgun, then you upgrade to a rifle, then a bazooka. You even get a force field! Here’s the deal, you have to be able to get to the new stuff and switch them out. You gotta run over to where ever the upgrade lands and grab it using the B button. That will switch you to your new upgrades. You can also switch them out as you play. The one thing I didn’t like was that there was a menu that told me all of the new upgrades I could get. It kinda threw me off. But other than that it’s a pretty fun game to play.

What did I think about it? I thought it was pretty good for an indie game with basic art. It really reminded me of one of the tank games I’ve played. Which are also plug and play, but you can move freely around the board. 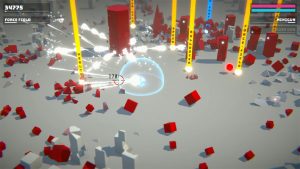 While there’s not much for graphics, but Destropolis makes up for gameplay and music! Destropolis has got to some of the best music I’ve heard in a while. I’m down with musical game scores. The music is very close to techno which one of the genes I really like. So while you’re playing this game, make sure you turn the music up and have a literal blast. It’s all by LukHash! You can find his work and LukHash.com 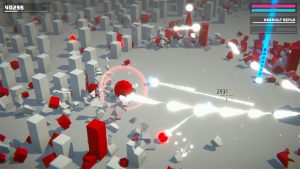 Oh hey, guys! Check out the online Convention Couch Con on Ice! It’s another online comic convention where you attend on your couch! Admission is free and the only thing you get to pay is whatever art and merch you find from artist live! I’ll be there as well as WoodlingsArt! Come join the fun this weekend with me and the others at the greatest online convention the internet as ever seen!  How do you get there? Easy check out https://couchcon.org/

Also check out my linktr.ee/delerias for more art yours truly! Modern Gamer!