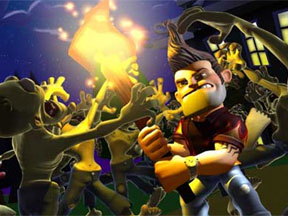 Originally a huge hit on the PlayStation network, Burn Zombie Burn recently made the jump to the PC via Steam, which is where we caught up with it.

Need something to keep you entertained for six to 10 hours but doesn’t require you to have immense amounts of time on your hands? I think I’ve got just the game for you then, Burn Zombies Burn. As the name of the game implies, you burn zombies.

Now wait just a second, that isn’t all there is to this. The game actually requires some strategy. You can’t just go lighting up zombies all willy-nilly and hope to get anywhere. You see a zombie is scared of fire (news to me). So if you light one up it will no longer be afraid of your torch. Also the fire will jump from one zombie to another really fast. This basically means that a flaming hoard of relatively fast zombies is going to be chasing you down while all you have is a pistol because you didn’t wait for the good weapons to spawn and as such you’ve just screwed yourself (firsthand experience).

Now the game does have a tutorial that you can play through to get yourself more acquainted with the controls of the game. Sadly though it’s useless, "Why is that?" you ask. Well someone thought it would be a good idea to have the tutorial teach you what keys do what by saying "Press the TNT button to drop TNT" or "Press the Drop Weapon button to drop your weapon." Thanks tutorial, but I was playing you to figure out what the TNT button was, not that if I press it, I will drop TNT.

Well back to the main point here. Shooting zombies. After dying while trying to figure out what keys do what, I was finally able to get into the game. This is overall a really simple concept. 1. Shoot the zombies until better weapons pop up. 2. Grab those weapons and kill more zombies. 3. Light zombies on fire with torch and then proceed to blow them up for a massive score boost. 4. Repeat.

It’s simple, mindless fun. Which is really what this game has going for it. It doesn’t require deep concentration or hours of sitting on the couch doing nonstop play. It’s easy to just pick up for 10 to 20 minutes and take out some of that pent up rage on the undead.

This isn’t to say that the game isn’t challenging though. If you are trying for the Gold Medals (or even Silver) to unlock secret content and get a highscore, then you’re going to have to work hard. Waves will increase to include more dangerous zombies overtime and you will quickly find yourself being overrun.

The only thing is that when you have to die every time to finish a match, well, it just kind of stops feeling like a loss and more like the end of the level. Also while not necessarily a flaw the game lacks multiplayer. This game just screams of potential as a party game with your friends. Sadly though there is only Single-Player.

The graphics in the game are simple. The protagonist is an Elvis look-a-like (which that in itself is humorous) and some of the zombies wear ballerina outfits. Overall a good little bit of humor can be found in just the appearance of this game.

If there is one thing I love about this game though, it’s the voice work. I couldn’t help but smile every time the character would say "I’m here to kill zombies and chew bubblegum, and I’m all out of gum." Or "Let’s paint this town red. Blood red." The game is just filled with cheesy humorous dialog like this and I loved it.

A cartoony Elvis and cheesy dialog, it really works for this game. This is saying something because I can’t really think of many other games with bad humor that were as funny as this one.

Is the game worth it as is? Depends on it you have ten extra bucks laying around or not. Would it be worth it if there was multiplayer? Defiantly worth it, even if you didn’t have the spare money lying around. So if we see a multi-player patch anytime soon I expect to see you all playing.