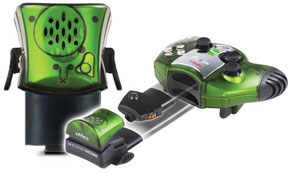 Even though I love XBox Live, using the Communicator is a complete pain. The enclosed headset might work well, providing both high input and output quality, but the headset hurts to wear after long periods of use. After three to four hours of Phantasy Star Online or Halo 2, my ear is blood red. Even worse, the headset clips are flimsy and break easily. In the year and a half which I have been a Live subscriber, I went through three Microsoft headsets and 2 Mad Catz ones.

As a result, due to broken headsets and a sore ear, I had to play XBox Live without a communicator at all, and when friends are trying to contact me, I felt helpless as I couldn’t talk back. Typing an onscreen message wasn’t the answer, because that takes too long. I needed to find an alternative that would work

Enter the Nyko SpeakerCOM. In what might be their best idea to come out since the WormLight, Nyko took the idea of making an XBox controller function as a cross between a speakerphone and a Nextel Direct Connect phone, offering a push to talk setup.

Installing the SpeakerCOM is a breeze. Simply plug the XBox Communicator base unit into the SpeakerCOM, and then connect the full unit into any dual ported XBox controller. Once installed, the Communicator mute button can be used the same as before, but in actuality is not needed, as on both sides of the SpeakerCOM are two rocker switches. These function as the "push to talk" feature. The whole unit is powered through the XBox itself, and does not require any batteries to operate.

When in use, most of the time, the audio quality is crystal clear. The only times I had trouble hearing anything was the result of immature players mumbling in a low tone or through voice masking. The microphone quality is also superb, as players were able to hear me without any disruption whatsoever.

Accessing the speaker feature is a cinch, thanks to the placement of the PTT switches. It is easy to switch from firing the main trigger to speaking to your teammates without fumbling around. Also, access to the Communicator’s volume control is not a problem either, as it is unobstructed.

The only quips with the SpeakerCOM are minimal. Since the device uses both controller ports, it will be impossible to use an external memory unit. Also, for those without a Communicator base unit, you will still need to purchase one, as the SpeakerCOM comes with the speaker unit only.

But at $20, the Nyko SpeakerCOM is a must buy for XBox Live addicts. Not only does it provide superior audio quality, both sent and received, but it gives your ear a rest and is a perfect alternative for broken headsets.