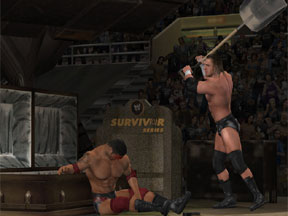 "Smack Down vs. Raw 2006" is hands down, everything you know and hold to believe in your heart as wrestling. Leaving nothing for the wanting, this grappler delivers the deepest and most realistic wrestling experience ever. The proof is in the game. From graphics to game play, this is clearly a title that no wrestling purist should be without.

The series has never looked better. New high-resolution textures and motion-captured technology bring the WWE to life on your console like never before. The character models more accurately resemble their real-life counterparts. Large and life-like arenas command the atmosphere of the game setting the tone for all those special entrances and main events.

Even the crowd is visually more realistic featuring much less jagged body proportions than in the past along with more colorful everyday attire. Not to mention the fact that their numbers seem to have increased dramatically as they heavily populate each arena leaving you with the impression that every seat in the house has been sold out.

Smack Down vs. Raw equally sounds just as good as it looks. From the opening theme down to the stage entrances the background music is on point. As always only the newest and most recent song remixes have been integrated into the soundtrack to help give gamers the most up to date WWE experience. Moreover, to complete the total audio package THQ/Yukes has re-implemented "ringside commentary" for all the matches and main events as well as added authentic superstar voiceovers to the "season mode" of the game. The essence of the WWE and what it’s all about has never been so closely captured before and you can give much of the credit to the audio department.

The game play mechanics of the game are still pretty much the same but there are a few new twists this time round. With the new "momentum" and "stamina" systems in place now players will have to seriously strategize to control the flow of the match. Gaining the upper hand and the hype of the crowd will, of course, put the momentum factor in your favor, but it’s how well you respect the rules of the stamina system that will ultimately determine whether you keep the advantage throughout the match.

Don’t expect to just come in and beat your opponent senseless and then apply the pin. Every action or high-risk move performed during the matches will be taxing on your stamina meter. If you overdue it and your stamina meter runs dry, the momentum of the match can quickly change hands in your opponents favor. It’s important during those key moments of opportunity when you have your opponent downed on the matt to rapidly regenerate you’re stamina by holding down the "select" button. The longer a match goes on the more critical it will be to keep your strength up.

This year you can also take advantage of the ability to "store finishers" and save them for just the right moment. If the flow of the match is in your favor then you can easily put your opponent out of his misery at any time and on your own terms once you’re done humiliating them in front of the masses. On the other hand, though, if you’re taking a serious beating, but you have a few finishers stored up you can play possum and perform a last minute reverse move to turn the tide of the match if your timing is right or earn yourself a second chance by kicking out of an imminent pin at the last second. With all the new features in place the possibilities are endless. No match is a given and that’s just the way the sport was intended to be.

Besides top-notch graphics, a superior audio package, and significant game play improvements, this year’s game is loaded to the max with all kinds of new content. For starters the game includes a power-packed roster filled with new WWE Legends like Jake "the Snake" Roberts, Ted Dibiase, "Mouth of the South" Jimmy Hart, Junkyard Dog, and the "British Bulldog". There are over an astounding 100 different match types to choose from including new match types like "Buried Alive," "Fulfill Your Fantasy" for the Divas, "Bar Brawl" and an improved "Steel Cage" match type.

Players can now also acquire and customize their very own 3-D locker room with all kinds of furniture, posters, collectibles, and more. Moreover, the season mode has been seriously beefed up with all new and unique cut scenes and scenarios for both facets of the WWE so players will be able to enjoy completely different story-types and experiences as they travel with both the Raw and Smackdown brands.

On top of that a brand new "General Manager" mode has been added in for players to test their leadership skills out. In this mode you battle the opposing General Manager for fan support. You can draft your roster, trade Superstars, set up infamous rivalry matches and manage your finances as you take your WWE show to the top of the ratings list.

The online play of the game is much better than last years but still shows a little room for improvement. Last year’s online mode was pretty dead, a bit on the laggy side and lacking any real spice to say the least. . This year however, up to four players can wrestle at once in a number of different match types including title matches. Players can put up their own created titles on the line versus another player in a "winner take all" fashion and can even make wagers with money you’ve won offline. There are other interesting things to do online as well including trading your created wrestlers with others to help keep your roster respectable. Then of course, if fame is your forte, then you can work hard to maintain your popularity across the web by keeping a close eye on your win/loss stats and title defenses. The only gripe would be the fact that the "lag" issue has not been fully tweaked so the speed of most matches varies depending on the connection and we all know of course that in this sport timing is everything.

Still though, the bottom line is that Raw vs. Smackdown 2006 is without a doubt the pinnacle of greatness for the entire series thus far. Never has wrestling been this real on a videogame. The graphics are simply amazing, the game play is significantly more improved, and the audio package breaks new ground for the series. Not to mention there is more content here in this year’s version than you can shake a stick at.

There’s just no reason why a wrestling enthusiast could get bored with this game over a short period of time. Smackdown vs. Raw 2006 delivers the most realistic wrestling experience ever on a console period. It’s the total package, and nearly the perfect game is it racks up a stellar 4 + out of 5 GiN gems.