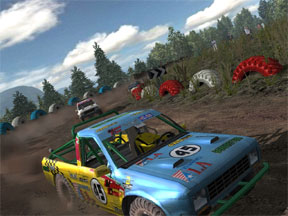 Lately, I’m having a hard time being impressed with off-road racers. I don’t know maybe it’s because I feel that for an off road title to be a hit it should have three very key ingredients in it. Number one, you’ve got to have physics, because control is everything in this genre of game. Number two, you’ve got to have graphics and I’m not just talking about really nice looking rides. I’m talking about large vast interactive landscapes with tall evergreen trees and naturally crumbling mountainsides, horizons that run on forever, and vast spectrums of lighting effects. Lastly, the number three key-to-success is a righteous audio package. I’m talking an engine roaring, frame rattling, metal-to-earth clanging type audio package with a beastly mix of soundtracks to help keep the adrenaline flowing. Now that’s my idea of the perfect off-road racer.

Enter "Cross Championship Racing 2005" for the PC. Now this is a typically classic off-road genre game at first glance, but once you really get under the hood you’ll find that this game has something that sort of sets it off from the rest: that’s depth. CRC 2005 is an off-road lover’s buffet of all-terrain racing.

Nearly every race type you can think of from autocross, off-road, rally-cross, rally road and even track races are available for your game play experience. On top of that is a sizable roster of available all-terrain vehicles, including stock Corus’, Quadro ADs, C-Racer 4x4s, Pickups, Scheforns, Revo GTs, and even a bonus T8-Classic. So right off the bat just in terms of what the game has to offer CRC seems to have some real potential, but more importantly will it have my three keys for success somewhere in its ingredients? Let’s crank this one up.

Graphically speaking, Cross Road Championship is much deserving of honorable mention. The vehicles themselves are fully customizable anywhere from shiny paint schemes and decals on down to tires and body kits. Initially, the amount of design schemes available is a little skimpy but as you progress through the game you’ll get a chance to earn some very cool schemes to help turn your ride into a thing of beauty. Also of noteworthy mention is the fact that the vehicles realistically collect debris as you race around various courses collecting anything from mud and loose dirt to gravel and snow.

The landscapes are rich and wide open with scenery. You’ll enjoy racing your way across six distinct environments, ranging from the icy mountainous regions of Finland and lush countryside of places like France and the UK to the parched desert areas of Hungary and the sandy beaches of the good ole’ U.S of A. No matter where you go the scenery is always alive with color and great lighting effects or cloudy overcasts. The best part of all is the fact that you never feel like your racing in the same place. Each track offers its own distinct terrain and conditions so that drivers get a new and totally different experience every time they change locales. There’s no doubt that, graphically speaking, CRC 2005 definitely has one of my 3 key ingredients for success.

In Cross Racing Championship you play through the life of a race driver, the way an amateur autocross racer lives the dream of becoming a sponsored track racer. Your career begins in the amateur autocross stage, with only factory cars and basic tire choices. Your car is unmodified, like a street car, with no sponsor stickers. However as you win races you start to get noticed and eventually picked up by different sponsors. Once you have them locked in, the key is to continue to be successful. The more successful you are the more trust you earn from your sponsors’ who will reward you with new parts for your ride and in some cases even new cars so that you can better compete at the serious levels of racing.

The next stage is road racing, and with it the joy of off-road racing with buggies and pick-up trucks. This is where the game really opens up and things start to get interesting. The racing becomes a lot more competitive so most likely you’ll have to end up spending some time honing your skills on the practice tracks before you become successful here.

If you’re going to rise up from the ranks of amateur driving then you’re going to have to understand the "physics" of off-road racing and let me just tell you now that Cross Racing Championship has some of the best and most realistic physics I’ve seen in a game of this genre in a good long while. The one thing that you have to appreciate about CRC is the fact that this is somewhat a simulation take of the real thing. If you go into a turn with too much or too less acceleration and lose position, it will be extremely difficult to take the lead back without some serious driving and a little help from something under the hood. Unlike your typical racing sim, there isn’t a "catch-up" factor in place so it’s important to stay in the race from start to finish.

Staying up at the front of the pack during a race means ultimately a few things. First off make sure you’ve got the right tires for the right terrain. "Off-road" tires are great for those watery and muddy courses. These tires allow you to accelerate hard into those slippery turns and "power slide" your way around them without losing too much speed or crashing by the way side. For road courses you want to keep your car tight to the road. "Tarmac" tires are great for cornering especially on those fast and winding courses. There are some cases, depending on the type vehicle you’re driving, when "gravel" tires might be the way to go if your ride corners too sharply. Gravel tires "give" a little going into corners allowing a brief second to power slide and still maintain substantial speeds. "Winter" tires are of course a given for any snow course as they give your ride an uncanny advantage on the white powder tracks and never take any chances on beach terrain without bringing along some "sand" tires.

As you progress through the game you’ll race a lot of multi-terrain courses. My suggestion would be to overlook the course and see if you have a tire that might work excellent on one type of terrain and adequate perhaps on another. Your other option is to make a practice run of the track and find out what kind of terrain runs mostly the length of the course and go with that tire. Never be afraid to experiment around to find out what set-up might give you that extra edge you need over your opponent.

Secondly, understand the capabilities of the vehicle your racing. The Corus, while not quite built for speed, is mostly designed for handling purposes. It’s great for all of your rough terrain tracks but is not really idea for road racing. The Quadro AD is nearly the opposite of the Corus. It’s mainly built for speed rather than handling. It runs fairly well on the dirt courses but with the right tires it can be the ride of choice on a road course. The "buggy" is your all-terrain vehicle. It has respectable speed and can go just about anywhere but its great suspension which allows for formidable cornering is what makes it idea for those bumpy and hilly courses. The "Pick-up" truck is somewhat a cousin of the buggy however it’s much faster and has a little less suspension. There are other vehicles to learn out there, but ultimately knowing what your vehicle is capable of doing will help you take make the necessary preparations before the race and the right decisions during.

Finally it’s important to pay attention to your race map so you can eliminate as many precious seconds as possible on any given turn. The race map displays valuable information about the layout of the course and is highly critical to your success. If you’re not watching it during the race then you may as well be riding blind.

Ok so we’ve talked graphics and we’ve talked game play physics and, what do you know, this game has at least two of my three idea ingredients for a great off-road racer. The question now is what’s the audio package like? Well for starters the musical presentation is excellent, blasting a quite a mix of soft and hard rock tracks to help keep the mood genuine while you race or interface with the game menus. The sound effects are pretty basic yet quite effective.

Each class of vehicle clearly has its own distinctive motor sound. The buggy and pick-up trucks in particular give the rider a rise as they roar around the tracks. My only gripes, however would have to be the lifeless and mundane cheers of small crowds of roadside onlookers as you ride by simultaneously chanting, "Go, go, go" or the race announcers painfully horrible lack of commentary. The game could have easily gone on without both of these. I would have settled for "win/lose" subtitles across the screen and a few more objects to crash into along side the road. The audio package overall, isn’t exactly what I was expecting in a game of this genre but its half decent despite it’s flaws.

Besides career mode, the game does offer a few extra modes including, "quick race", "time trial", and an interesting "hot seat" mode where up to five remote players race the same car, one taking over the driver seat after the other has finished a certain amount of laps. The online feature of the game is pretty decent offering game modes like "Capture the Flag", "Destruction Derby" and a cool "Car Swap" mode where players trade driver seats if they collide with one another. Besides a host of different game modes, it is also possible to download music MP3’s to incorporate into the game as well as new skins not otherwise available offline to add to all your favorite rides.

The bottom line is that while Cross Racing Championship is not totally my idea of the perfect racer it does at least have two out of my three key ideas for a successful racer which is pretty impressive in itself. The game offers nearly every off-road race type you can think of making it any hardcore fan’s dream come true title. It has some of the best physics I’ve seen a game of this genre in a good long time making it a real rush to play. Aside from a mediocre audio package CRC 2005 is one solid ride for sure. This game easily races to a well deserved 4 out of 5 possible GiN gems.