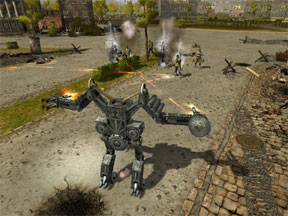 Being a big fan of The History Channel, it’s always fun when they ask "what if" something happened differently than the actual event. And this type of speculative history has been a mainstay of fiction books for some time, with authors like Harry Turtledove really pushing it to its limits.

So it makes sense that this genre would make it into games. In fact, it does all the time with games that put forward "aliens invade Earth" plots. But good alternative history is more subtle than that. In Warfront, there are two major events that are changed, which totally makes World War II different than we remember.

First, operation Sealion actually goes off as planned, which was Germany’s plot to send troops to invade Southern England. In reality Germany decided to bomb civilian targets instead of purely military ones and lost the Battle of Britain in the air, which nixed any real invasion plans. Later on British commandos attacked and sunk most of the gathering barges that were to tow troops across the English channel anyway, making any future invasion next to impossible. Here the invasion goes off which sets Germany’s plan to capture southern England and the city of London, in motion.

This plan goes off because of a second event, the death of Hitler. Although he is never mentioned by name, a fact I find really odd given the game’s supposed historical roots, the chancellor of Germany as he is called, is assassinated by his own people (in a player-controlled mission) early in the war. Hitler was a terrible military strategist, especially later in the war. He let his ego and his notion of Nazi invulnerability get in the way of good strategic decisions. And his hatred and animosity toward other world leaders made it impossible to hammer out any type of peace before the total destruction of the German armed forces.

Okay, so you have the Germans invading England and Hitler being taken out of the picture. So what is the ultimate result? England, Germany and the U.S. band together to fight Russia. What? How does this happen you ask? Actually this part of the game is extremely plausible, and really comes through when you play the German campaign. Basically the non-Nazi part of the German government sues for peace and goes to war with the hardcore Nazis to prove their loyalty. This really weakens Germany as it goes through what amounts to a civil war. And a weakened Germany is too tempting for Stalin not to strike at now that he has got his huge army mobilized and ready to go.

So the bulk of WWII is fought against Russia, which is actually somewhat plausible. In fact, General George Patton advocated for this very action as he was one of the few people who could see the coming Cold War and wanted to nip potential problems in the bud.

From there, things get a little weird. Basically all the armies end up with ridiculous weapons like freeze tanks, giant walking mech-like robots, stealth bombers and rocket pack infantry. It’s never really explained how this happens when it did not happen historically. Surely Operation Sealion did not somehow cause technology to jump ahead 60 years. Some of the weapons deployed, like sonic tanks (similar to those in House Atreides from the Dune RTS) don’t even exist today. The game never really decides if it’s trying to be an interesting alternative history tale or a sci-fi B-grade movie.

But that is about as much as I have ever written about the plot of a game without mentioning gameplay, so obviously the plot stuck with me. Warfront is an RTS title and strikes a good balance between offence and defense. There is an American campaign and a German one, each with 12 missions. The missions are pretty varied with some being the "defend the base" type, a few being the "accomplish your goals with limited resources" kind and most being "build up a huge force and crush the enemy" standard. On most missions, giant rushing attacks win the day. You will also be rushing back and forth quite a bit, as new secondary objectives pour in very quickly as the battlefield situation changes. You might be about to launch an assault when a desperate cry for help will come in from an ally, forcing a shift in your strategic strategy down to the tactical level to react. Both strategic and tactical skills will be needed to be successful.

Building up your bases is pretty well done, with tech trees that support one another that make sense. A radar station is needed for example before you can build an airport and start fielding air units. Gathering money is done by sending trucks out to mines, though can also be accomplished by capturing banks and supply depots. And there are three types of turrets (anti-vehicle, air and infantry) that you can construct to keep your base safe. Power also has to be managed, which is done by building power plants. And most units and buildings can be enhanced later in the scenario by buying add-ons for them, like the supercharger which makes trucks at your supply yard move faster or generator technology that will make a power plant supply more juice.

There are also hero units who carry the storyline. These units are basically just people, but are as tough and powerful as a small army just by themselves. They can be upgraded as they earn experience to enhance their special abilities, like dealing more damage, earning more money for your side or giving all units around them a bigger fire range.

Graphically, the game is quite stellar. The environment looks very realistic right down to the little tracks some of your units make when traveling. You can zoom in or out and rotate the screen to get the best view. Before and after each mission you are treated to cut scenes that are some of the best I’ve ever seen. It makes it a real treat to successfully complete a mission and then see a movie that shows what you accomplished.

The sound in the game is quite good, but the voice acting is very hit or miss. Part of the fault of the bad voice acting is actually the silliness of the dialog script, which is poorly written and almost campy, an odd choice considering the dramatic nature of the cut scenes.

Warfront: Turning Point looks at WWII from a different angle. Though it quickly devolves into something that at first glance does not look a lot like WWII, it still will keep you interested with its varied missions, meandering yet interesting plot, and the promise of more cut scenes if you can just take over one more hill before bedtime.