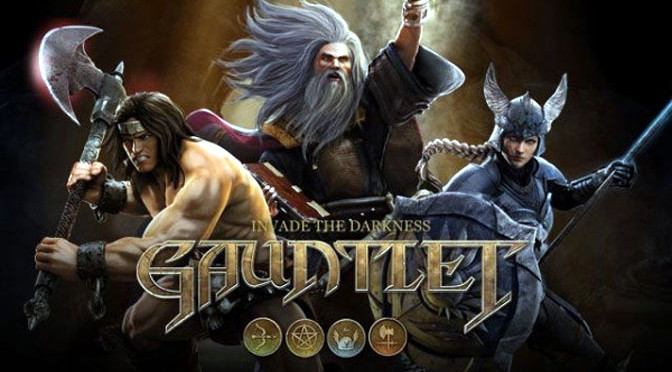 My first experience with Gauntlet was playing with strangers on a standup machine in my local arcade. I loved the co-op experience and the challenges of playing with whoever came along. My next experience was with Gauntlet Legends on the Nintendo 64. Friends and I spent hours playing and advancing through the levels. Once again, the best thing about it was having people over and all playing together in the same room, something you don’t see often anymore in games. Nowadays co-op play is almost exclusively online or limited to just two players.

Gauntlet: Slayer Edition loses the experience of playing in the same room with friends, but it does allow for both playing with friends online and for playing with random strangers, which makes me really happy. It’s still the same fun dungeon crawl of killing bad guys and collecting gold, food and potions.

Aside from the co-op play, which is super fun, there are some drawbacks. First of all, the graphics are not stunning. In this day and age, I feel like they could have done more with the characters and with the environments to differentiate the experience of one dungeon room from another. As it is, the visuals get pretty dull after awhile. This is too bad, not only for gameplay, but because, for their time, the previous Gauntlet games had good graphics.

The audio, like the graphics, is lackluster. Comments from the characters are funny at first but wear thin after awhile. Another drawback is that, despite the fact that I have a robust, very fast Internet connection, the servers occasionally dropped me, which is frustrating in the extreme for all players involved.

This version is improved over what was released only on PC last year, and with this release, an update for the PC version is also available. This version includes the core campaign that involves grinding through levels for the inevitable boss battle that will seem familiar to anyone who has ever played any previous Gauntlet game.

The new edition also includes a daily Coliseum challenge and Endless mode. In the Coliseum challenge players have an opportunity to earn more gold and get new clothing for their character. Endless mode is just wave after wave of enemies, but for players willing to pay a premium, spells and potions are available to buy in this mode.

For a lot of old school fun with a nice modern twist, do yourself a favor and check out Gauntlet: Slayer Edition on the PC or PlayStation 4.