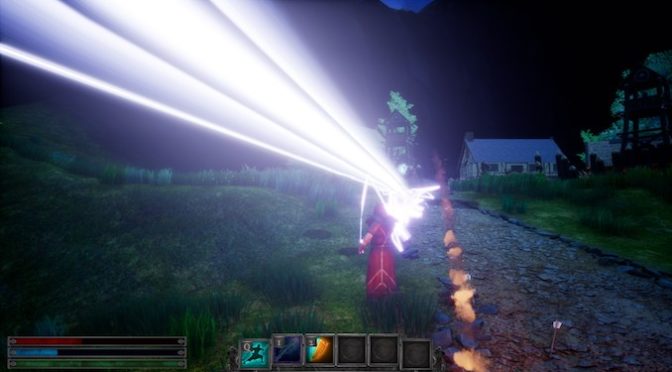 First off I need to say this game is not bad at all. It does however have its flaws, which could make it seem not worthy of a person’s time. I disagree, even with some flaws this game, is fun and you can wield some serious magic. The premise of being a hunted mage with awesome powers is fantastic and makes for a very interesting story, the gameplay is good, and the added bonus of the storytelling and making history goes a long way.

However, issues come with combat mechanics, environment, and a predictable AI. Mindless townsfolk do not add points to the game but can be overlooked. That said, Fictorum by Scraping Bottom Games is  a unique title, and quite entertaining, once you get past how to defeat the AI.

The game’s story begins with the Inquisition hunting the last of the Fictorum, you the player, a powerful wielder of magic with “god-like potential.” Your mission is to survive to find the Grand Inquisitor. Using nexuses throughout the world your Fictorum will reach his foe. To get there, the Fictorum must survive an onslaught of Inquisition enemies and the corrupted. Written in the scrolls is the Fictorum’s battles and history. If death finds the Fictorum, just rewrite history and start again from the last village and nexus. Getting to that “god-like” state takes patience to reach, and completing areas by defeating the Inquisition and not taking the easy road.

Scrolls tell of something to anticipate and get you prepared for the battle ahead. Unfortunately, I did find areas to be repetitive. They may look different but the environment is similar with mountains, a small village of a few houses, some townsfolk, trees, and a rudimentary environment system that brings some life to the map, along with an onslaught of AI Inquisitors and Corrupted.

Now what I did like is being thrown right into the action after a short and I must say brilliant little tutorial. No need to discover your magic here. Players start out as a trained and powerful Fictorum. Although you do gain new abilities during the game, the beginning abilities come with the ability to shape spells for damage or targeting, making them uniquely powerful beyond their base configurations. Of course, more power and runes make for a better game experience when you can add them.  As for the abilities, an example is the Firebrand one that uses fire magic and the Tempest ability which allows the mastering of lighting.

Even though you start out with powers, your inventory will be bare with only light gear to combat the AI. Despite the gear I found the best way to keep from getting killed is just throwing magic from a distance. Once the enemies gang up and overpower my Fictorum, survival is usually limited. I also took great advantage of destructible structures and the magic shaping ability.

One thing that is a blessing and a curse with this game is the destructible buildings. Certain towers that prevent the nexus, a magic teleporter, from being accessed need to be destroyed – but if not mindful you can end up collapsing a building on top of the Fictorum. Building collapses drain health and can lead to instant death. Another problem is the difficulty of restoring health. If you don’t have enough essence to buy healing potions at a vendor you are out of luck. Potions are rare in game and the ones I found were in houses at the start of a map and beginning of the journey, which did little good. It is always best in this game to search every structure. Not only for potions, but also better gear and items to enhance your magical abilities. Higher magic is obtained as players complete maps and earn rewards.

The good news is the game plays easy and doesn’t require specific gaming skills to play. For new players to the realm of magic and RPG style games, Fictorum is a good introductory title. Players start with a disconnected map and select close areas to the Fictorum, giving players choice of where to go. Areas can be replayed, just in case you want to go back and work on defeating all those Inquisitors and grab missed gear and items. Just selecting a choice on the story scroll can get you past some areas without needing to fight, though most areas need to be completed by accessing the nexus. There are on occasion tasks besides escape, like killing the Inquisitors or Corrupted, or keeping the townspeople alive. Forget about townspeople, they are zombified. Players cannot interact with them and they tend just to stand there or walk back and forth with no purpose. As long as the Fictorum makes it to the nexus they can move on even if no enemy was killed, which is possible. Or you don’t make the nexus because the enemy overpowers the Fictorum.

This gets to the AI. Enemies are very predictable. They will always show up in the same way and in packs. Taking them out before they get near your position is the goal. As soon as they are allowed to swam, that is it. Well that was my experience. A swarm of enemies means using too much energy and magic leading to a massive drain in health. Attacking from a distance with careful precision is the only way to preserve the precious health.

Every area of the map is similar leading to a mundane feeling that is not too exciting. That is one of the major flaws next to predictable AI.  The game does have a good inventory system and with enough essence, objects tied to magic abilities can be upgraded through enchanting. New items and gear are found in houses and are retained if a nexus is accessed and a map finished. I do like the story and scroll that guides players through the game. There is also the tutorial, a very simple but effective one to start the player out. Players go through a basic area with nexus and learn how to aim and throw magic with written flaming instructions on the ground. Hit an instruction, do it, move on to the next. Instructions are very simply written and get right to the point. This is how tutorials should be done, simple and to the point. Gets the player straight to the game.

Perspective is interesting in this game. Out in the environment it’s a third person perspective but once inside buildings it turns to first-person. Actually, I did find this helpful when searching for secret items. When aiming to take out enemies with magic or runes, the third person was appropriate.

All in all I like the game but it could use improvements with the AI and environment. A good story about a powerful mage from the mysterious and vilified sect called the Fictorum. Last of his kind, he is ruthlessly hunted by the Inquisition and must face the Grand Inquisitor to redeem his order. Let us not forget the awesome magic wielding that takes place.  If anything, wielding this power makes the game unique, fun,  and playable.  Despite some flaws, Fictorum is a good little RPG game that I knew was going to have potential right from the tutorial.  A simple customization menu adds some uniqueness to the player’s experience, adding to the appeal of the game.  Some improvements are needed to make this better but I would recommend Fictorum for the RPG and magic-wielding experience alone.