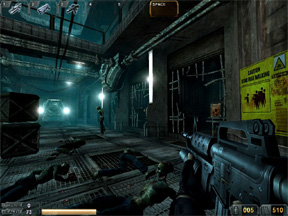 Editor’s Note: This is a special beta preview of this title. As such, the score for this game is unofficial. It is what the game might receive if the current development path continues.

It’s not very often we run across a shooter with some interesting twists. Half-life 2 was like that, but not many others fit the bill. Psychotoxic does however.

Now, just to let you know, I was playing a preview build of the game. As such, much of the story elements were missing. However, while this made the plot of the game very confusing for me, the core of the title and all the varied levels were there.

You play a young woman named Angie Prophet and the game is set in modern day. With a name like that, you know she is destined for great or terrible things. Why didn’t her parents just name her “The Chosen One” or something like that to avoid the mystery?

Anyway, you start off in an FBI office and everyone there seems to be trying to kill you. The details of the office are very well done. There are wanted posters on the walls, including some real ones like the ten most wanted list starring Osama. There are also tons of framed pictures of Washington DC on the walls showing various statues and points of interest around the city. This is actually a bit odd since you are actually in New York, but perhaps the FBI boys are really into the city where their national headquarters is located.

There are even family photos littering the desks. This made me feel kind of bad since I was gunning these people down, though I suspect when the story elements are added to the game that this will explain what is really going on. It seems that everything is really detailed. One dead FBI agent was slumped into a copy machine, and it was constantly printing out pictures of his face smashed up against the glass.

Not only is the environment so realistic, but it’s also destroyable and interactive. Almost every computer screen could be blown away. Glass could be broken. Cars will explode if you shoot them enough. Even the toilets could be flushed and you actually see the water behave the way it should. Not that most players will be experimenting with how real the toilets are, but it goes to show the level of detail.

The game uses the Vulpine Vision Graphics Engine. To me, it looks a lot like the Blood engine, which was one of my favourite of all time. When you shoot someone, blood is going to fly all over the place and stain the environment. When I was done with some rooms, they looked like a CSI technician’s worst nightmare.

Prophet, in addition to being a really good shot, can also use special supernatural powers. You pick up these powers like normal weapons. As you use them, the total amount of power for that ability drains, much like a giant spiritual battery. Once you have used it all up, it’s gone. Also, you lose your existing power when you pick up a new one.

Powers include the ability to slow down time, which is a huge advantage during an ambush, and healing which will keep you alive by directly turning the spiritual energy into hit points at a one to one ratio. There are many other powers in the game that can be used to gain an edge as well, though I found the healing one to be the most useful.

The weapons from the preview were pretty much standard fare. You have machine guns and shotguns and various pistols. The silenced pistol is a great weapon. With it I was sometimes able to take out one guard without any others nearby noticing.

Angie can also enter other people’s dreams, which are actual levels in the game. When I found a sleeping security guard, I was able to enter his nightmare. Within the dream world, the rules are vastly different than in real life. When I killed an enemy, their bodies actually flew upward into space. This was kind of fun when I was doing some long range shooting. I would wound them sometimes and would keep firing because when they are actually killed they fly upwards into space, which is a bit tip that you got them. Bodies use rag doll physics by the way, so they look real when tumbling down the ground, or even shooting skyward.

Like most shooter games, there are a lot of hidden areas in the extensive levels. I really laughed when I found Fox’s office from The X-Files hidden down a vent shaft, complete with a “I want to believe” poster and a bunch of other goodies.

The game is rated M because off all the violence, and the dream levels can get a bit risquT as well. You will see some pretty disturbing stuff in the dreamworlds.

Psychotoxic is a beautiful, well-detailed game that should keep you entertained for hours on end. Even in the limited build that I was using to review, it was an enthralling title that I looked forward to playing each day. With a little extra spit and polish, it is going to be a real gem for any shooter’s desktop. The game recently went gold and should be out in March, and I for one am really looking forward to getting back into the deadly and sometimes twisted world of Psychotoxic.