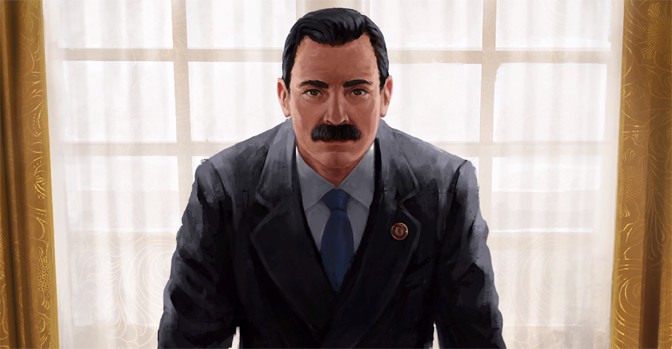 In the United States, we just welcomed in a new president. Despite the subdued undertaking because of the pandemic and an active security threat, inauguration day was still a festive time. As I watched our new president walk into the White House, I couldn’t help but think of the monumental tasks waiting for him. The real work certainly started after the bands had all gone home.

All of that put me in the mood for a political simulation game, which are somewhat rare these days. Many deep role-playing games like Pathfinder: Kingmaker contain political and leadership elements, and some games like Yes, Your Grace really focus on it. However, the political elements are almost always confined to a few really exciting decisions or moral dilemma kind of situations where life and death happens quickly after the leader makes a call. 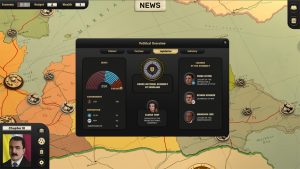 Real politics is not like that, and that is where the new Suzerain games comes in. It focuses more on actual political workings, where you really have to research all of your options, even when deciding on something comparatively boring, like whether or not to support free-markets or a planned economy, or whether you should invest in a new highway or a high-speed rail line. The benefits or drawbacks of your decisions may not be known right away either. It can take months or years of in-game time before your plans start to coalesce, or collapse. There can be a few exciting moments too, but they are not the norm.

The game puts you in the role of newly elected President Rayne, ruling over the country of Sordland during very turbulent times around the 1950s. Although the country is fake, one could get the impression that it’s some kind of middle-eastern or maybe eastern European type of kingdom. Some of your earliest choices involve allying yourself with the capitalist west or the communist east, or trying to go it alone with very limited resources. All of the world’s countries are made up in the game, but the parallels to the real world are obvious. 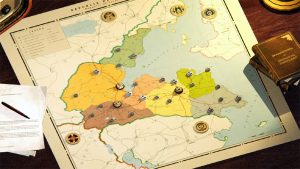 Even though the world is fictional, developer Torpor Games has created a very deep history of your country to discover. There are dossiers available for all of your advisors and your potential adversaries/allies, as well as prominent citizens from Sordland and the surrounding countries. Even special buildings and landmarks get a little writeup. All of your cities and towns get similar treatment, and even send you regular reports about things like their economy, homelessness levels, traffic, disease, fear of nearby countries, citizen concerns and just about everything else. You can ignore all of that, but the key to making good decisions is to do the work and learn all you can about the current situation. 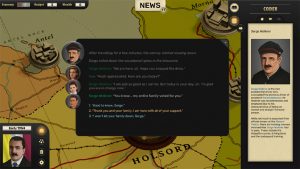 The actual gameplay consists of going to a lot of meetings, which I think is probably the essence of politics and certainly democracy. Some of those meetings are merely informational, where your advisors will sometimes argue but mostly just try to give you the facts as they see them. Sometimes you can spot holes in their arguments, but only if you have read all of those aforementioned reports and really know the lay of the land. Honestly, I loved that part of the game, but if you are not really into politics and don’t do the work of learning about Sordland, you may find it a bit dull. Sometimes the complexity as well of the enormity of the problems facing your nation will also seem overwhelming, and change is sometimes glacially slow. 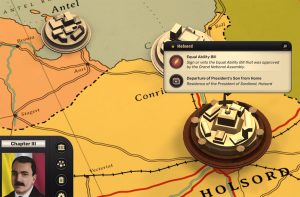 You also get to make decisions of course. Sometimes this will be as simple as signing a bill or vetoing it, but other times you will need to spend your country’s limited resources to invest in a big project, or change the entire culture of your nation in painful steps. Or you might need to anger one faction in order to appease another, or to do what is right for your country, or at least what you think is right. 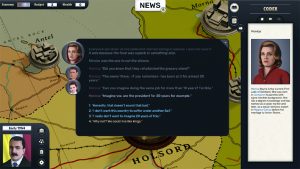 In addition to running your nation, you will also have some personal decisions to make. These sometimes involve things like your relationship with different family members, but also things like whether or not you succumb to corruption. There are some legal ways to improve your fortune, though they generally take longer than the easy money route. How much you want to sell personal and political favors, or some would say your soul, is up to you. The lure of easy money and corruption is powerful, but so are the risks. 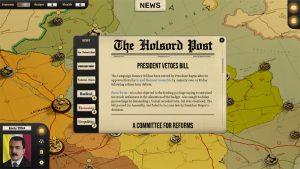 You only play for one presidential term in Suzerain. Whether or not you win reelection, get voted out or even arrested and imprisoned, your game ends after that first term. Given the slow pace of the game, that can seem like a long time, especially if you are really diving into the history and the politics of the world. At the end, I feel like I left my version of Sordland in better shape than when I started, which was my goal. I went back and played as a greedy, selfish politician too, which was just as interesting. And I didn’t necessarily end up in a worse position in the end. 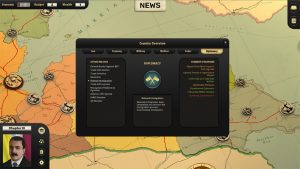 Suzerain is a hardcore game for deeply invested political enthusiasts. If you have no interest in politics, stay far away. But if you are happy to put in the real work of running a complex and somewhat disadvantaged nation, then Sordland has an opening for a moderately-honest presidential leader. Do yourself a favor and get sworn in today.