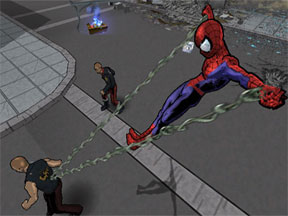 I can say the marketing people did a good job sucking me into getting this game.The packaging looks fantastic and if you’re a comic book freak like I am you’ll say to yourself “I have to have that!!” I really should have taken to heart the old saying back in grade school “You can’t judge a video game by its cover.”

The Ultimate Spider-Man game was quite a let down. I’m not saying it’s horrible, but I was expecting a different gaming experience than the Spider-Man 2 game. Let’s just say they gave us Spider-Man 2 in comic book form.

This time, we are told the story of Peter Parker and the famous radioactive spider bite, but we also get to see the story of Eddie Brock A.K.A. Venom. This is kind of an alternate reality tale or a “what if” type of story.

Now this is quite entertaining but you find yourself fighting street thugs, helping goofy New Yorkers hanging out of windows ready to fall to their death and finally the Boss fights just like from hmm..Spider-Man 2? This unfortunately makes up most of the game play.

One Boss that is back is Rhino. And he has really changed since SM2. He is more machine now than man, twisted and evil. This is a very tough Boss to fight and you get a nice surprise when you beat him.

You will be surprised again when you meet up with Johnny Storm. (But not in a good way.) This is the beginning of the time trials. Here you have to race Johnny around New York while touching spider orbs, which look like giant Christmas bulbs and act as race waypoints.

This part if the game is a total and complete waste of time. It was like they needed to fill the game up with something so I guess theydecided to resort back to the racing crap.

When I play a Spider-Man game, I don’t wanna race, I wanna kick villain butt! If I wanted to race I’d buy a racing game. See, I already played this in SM2 and hated it. And if you haven’t guessed, I still hate it.

But to add insult to injury, you HAVE to race Johnny. There is no getting out of it. To continue to move the game forward you must race.

In addition to all the racing games scattered around the city, there are also fighting trial missions. In these, you race around the city from point to point, but at each stop you have to beat up a gang of thugs. As you move to more points on the “race” the thugs get harder and more numerous. This is a lot better than the simple race games, but its still just a lot of pointless running around.

As you complete either races or fighting trials, you will be given tokens, which are also hidden around the city in various spots like on top of water towers or behind your school’s sign. As you collect tokens you unlock special features like animator’s drawings of Spider-Man or special pictures. This stuff is okay for comic book junkies, but most people will probably think the reward (looking at a picture) is probably not worth all the effort.

So what is Ultimate Spider-Man saving grace? You get to play some missions as Venom.I was shocked and thrilled to be Venom. Especially when you start running down hispower and the only way to replenish his energy is to suck the life out of innocent by standers. (Look for a kid with a balloon!) Although a bit shocking for a Marvel comic, being the bad guy is a lot of fun.

Venom may be a bit slower than the web-head, but he is stronger. This gruesome beast can throw cars at enemies and reach them from quite a distance with a tentacle sweep. He evens gets into a fight it out with X-MEN! He’s that tough. While the missions were fun as Venom, there were not enough of them.

The graphics are a comic book fans dream. It is drawn to perfection, plus the added feature of animated comic panels move the story along. This is a great idea, but I want more than just a pretty face. The sound quality is fine but really shines when you throw punches and hear the POW and SWAT sounds.

Overall, I was really hoping this was going to be completely different from SM2. But to my dismay, there was nothing really new other than the look of the game, and of course you can play as the villain.

This game should defiantly be put on your “rent it” first list, unless you have never played Spider-Man 2, which means you might find this one more fun.

But who knows, I could be totally wrong about this one. Nah!