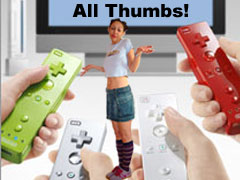 There's a fine line between genius and lunacy, and Nintendo have always delighted us with their tight-rope walking when it comes to treading this fine line. But they may just have wibbled their final wibble. Could they have finally slipped into the chasm of madness my dear play chums?

We all wondered about the moniker ‘Revolution' when Nintendo announced it. What's so "revolutionary" about a console that is definitely bringing up the rear in the specs stakes? Visually, Revolution is the finer of the next gen consoles. It's sleek, shiny and suitably space age looking. But I wouldn't say it's a revolution of any kind.

So here we all were wondering what the frig Ninty were blathering on about and whether the Japanese definition of Revolution was different from ours and then they unveiled the mysterious controller. You must remember, up until then the only pictures of the Revolution were of a kind of floating, white monolith; no wires, no controller, no gormless gamers planted in sofa trying to persuade us how it's a portal to happiness, sexual prowess and a world where your parents understand what you do for a living. So the unveiling was a big event.

Ninty tooted their trumpets and whipped back silky drapes to reveal – dah de duh daaah. Er"that looks like a TV remote. Okay, who stole the prototype controller that's about to shake up the gaming community?

That was the revolution; completely discard what has gone before and blow raspberries at your second-guessing competitors. Although, one has to wonder if Nintendo are even competitors anymore, in the eyes of Microsoft and Sony. Maybe Ninty are just like that slightly eccentric relative whose company you really enjoy, but ultimately can't take seriously.

To be fair I can kind of see where Nintendo are going with the TV remote design. At the end of the day they have always been about inclusive gaming for all the family type shenanigans. And what better than a TV remote to break down barriers. The controller is a major barrier for people who have never played a game before. It feels alien and it's hard to comprehend how moving the pad will translate to the screen. However, give your gran a TV remote and they're already one step ahead.

It's a brave step to take and you can rely on Nintendo to be the ones to do it. I mean who in their right mind would really say, let's forget the one controller in two hands model? But Ninty have and I'm kind of excited to try it out and see if it can really work.

The controller turns the holder into a magician. Simply point it at the screen and move it around to control the action. It sounds too good to be true. And to solve the FPS question Nintendo have invented the "nun chuck controller." This is an analogue joy-stick that plugs into the main controller. This allows you to move the camera as you would normally and kind of returns the whole thing to a traditional controller"hmmm.

It's all well and good being revolutionary, but have they really thought it through? Nintendo has proved with the DS that if there's a box they'll be the ones to think outside it. But it's also proved that originality and innovation doesn't necessarily make you a market leader. There's a distinct lack of third party titles for the DS and I'm thinking this is a blueprint for what's going to happen to the Revolution.

The problem is not only the fact that the Revolution vastly under-powered compared to Xbox 360 and PS3, but it's coming out well after the party has started and it's got a weird controller. It could be a great controller, but how many developers are going to dive straight in now and start developing for it? This means the launch line-up could be sparse at best.

Without the software, Nintendo's going to be dead in the water. And what kind of games are going to follow this new breed of controller? The last thing Nintendo needs is more gimmicky games that are made purely to exploit the controller. And the last thing we need as gamers is lazy ports with added features shoe-horned in to take advantage of the controller.

Ten out of ten to Nintendo for creating a controller that is completely inclusive and non-threatening to non-gamers. It's accessible, easy to understand and turns things on their head a bit, which is what Ninty do best, but they've got to deliver on software this time. As usual with this industry, it's just a case of wait and see.

All that aside – bless Ninty for being crazy as a box of badgers and keeping us all on our toes.

Most played: City of Villains