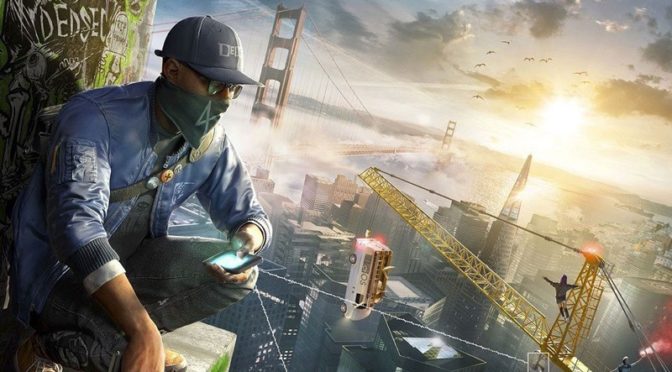 Watch Dogs 2 isn’t a revolution, but it’s a clear improvement on the original, which gave us a bland hero with nothing to say. Ubisoft clearly listened to the criticisms of Watch Dogs because this time around we get more fun, a much more engaging protagonist and some political bite.

Ubisoft has a habit of throwing out a new IP and then following it up with a sequel that ticks all the boxes. I’m talking about Assassin’s Creed, of course. The first game in that series wasn’t an out and out hit. People could see it had potential and Ubisoft delivered with Assassin’s Creed 2. Ezio was the charismatic lead who had everyone hooked on what was to become a highly successful series, that is only just getting a bit tired.

Watchdogs 2 hasn’t quite pulled the same rabbit out of the bag, but it’s a solid game with lots to enjoy.  From the opening sequence, Ubisoft declares that things are going to be different this time.

Start hacking with a copy of Watch Dogs 2 from Amazon!

Marcus is the black protagonist who does more than steal cars and shoot people, although he can do that too, if you want. I’ve chosen to opt for non-lethal play style, for the most part, but sometimes needs must.

The game starts with Marcus infiltrating a building and hacking into its system to erase his data. Thankfully, Watch Dogs 2 has improved on the hacking. Now you get fun, complete-the-circuit style puzzles in order to access systems and take them down from the inside.  This adds to the tense opener, which is reminiscent of a Mission Impossible film, as Marcus tries to avoid the guards, communicate with his team and make an audacious escape, once the alarms go off.

Marcus becomes a member of DedSec, an underground hacker collective intent on taking down Blume, the company behind the intrusive software programme CtOS 2.0. The message from DeadSec is – they want your data. To win the game, you have to take on hacking missions, in order to build followers and make things difficult for Blume and their corporate allies.

The DeadSec team comprises Sitara, the artist and social media expert,  Wrench, the annoying, wise-cracking engineer with an emoji mask on, plus Josh is the Aspergers computer genius, who has some of the funniest lines and moments. Marcus is the master hacker and the guy on the ground who gets inside and gets stuff done.

In true Ubisoft style, you are presented with a baffling number of missions and side quests, which are available via Marcus’s smartphone. Missions and upgrades are also available via phone apps, so is the city map, plus messages from the team. You can also take selfies around the city.

There are also opportunities to drop in on other people’s games or you may get visited and asked to play. I’ve also seen a few players trying to hack me, so the seamless multiplayer does work at the time of writing.

Watch Dogs 2 feels a bit like GTA with hacking, even if the dialogue’s not quite as snappy. In fact, the dialogue can be a bit clumsy, with things like “hella” proving the writing team haven’t learnt the lessons of Life is Strange, when it comes to getting cool kids slang wrong. Despite this, as the game goes on, we learn more about the characters and warm to them and their stories.

Marcus comes armed with  a prison-style pool ball on a bungie cord, for rather brutal non-lethal takedowns. He also has a stun gun, but you can pick up real guns or make them in the 3D printer at the DedSec base. And just like the first game, he also has the  environment at his fingertips, allowing him to hack into cameras to scan the area, as well as mess with traffic lights during a chase.

As part of his arsenal, Marcus has little drones and remote control robots, which he can send into areas he can’t reach. He’ll plonk himself down outside with his laptop and then the camera switches to the vehicle. This allows him to access panels to unlock doors and assess interiors before going in.

Watch Dogs 2 allows you to play the way you want to. I’m going gun-free, where possible. I’m happy to use the stun gun or hack fuse boxes to deliver non-lethal shocks to guards or simply distract them and slip by. However, you can focus on your guns and explosives skills or on your social manipulation by hacking into people’s phones and messing with their lives.

Compared to the first game, it feels like you have more freedom to act like a hacker, rather than an angry white guy with a gun. I’m not sure Watch Dogs needs guns at all, as it doesn’t really fit with the underground infiltration theme. Fortunately, the game allows you to take that path if you want.

The one revelation in Watch Dogs 2 is the whole city is open to explore. No more climb the tower missions and hallelujah to that. Ubisoft has finally ditched that core structure, which was a hangover from Assassin’s Creed and made Watch Dogs feel like a game without its own identity. Now, San Francisco is at your feet from the start, which makes it fun from day one.

Watch Dogs was a disappointment because it missed the chance to make any comment on the real world. GTA may be crude, but at least it feels like it has something to say and, thankfully, Watch Dogs 2 does too. This game really knows its targets – there are man buns and cut throat corporate meetings taken during a yoga session. Hipster San Francisco is full of coffee shops and bland clothing chains, where Marcus can pop in for a drink or buy some new threads.

In one scene, DedSec is at the equivalent of the Burning Man festival and Marcus berates a corprorate who is selling tickets to the VIP party. This is  clear dig at the likes of Mark Zuckerberg, who attempt to appropriate the counter culture, but do so by helicopter.

When it comes to missions, Watch Dogs 2 is packed to the rafters. Some are fun, if perhaps a little repetitive, and some are needlessly infuriating. Although I said I enjoy the hacking a lot more, this was ruined by one mission in the desert, which ups the complexity and adds a timer. If you fail to complete in time it resets, which could stop your whole game if you don’t get past it.

On the whole, the missions follow the infiltrate a building and hack the system style quest, but the story sometimes feels a little bit forced and doesn’t always hang together.

The driving has improved, but it still feels like San Francisco has more than its fair share of ice on the road. Thankfully, you’re not forced into driving missions with unrelenting police forces chasing you around the city. In fact, the cops are rather easy to shake this time around, which can break the immersion, after you just hack a system, kill some guards and walk out through the front door, past a police troop.

Watch Dogs 2 adds a much needed dose of fun into this series, elevating it from the original with some engaging characters, whilst giving it a moral heart. It’s not a great game, but its a solid entry. However, as with its predecessor, Watch Dogs 2 still feels like just one of the host of other urban, openworld games already on the market. To warrant a Watchdogs 3, Ubisoft will have to pull something good out of the bag.

One thought on “Watch Dogs 2: Hacking Fun in San Fran”