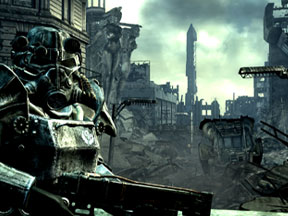 But apparently the world of Fallout does.

For a few hours the other week, sixty lucky members of the press were treated to a world of broken dreams, radiation-enhanced insects, vault dwellers and the apocalypse. And then we were sworn to secrecy until July. Of course we are talking about Fallout 3.

After years of almost total mystery, Bethesda was finally ready to pull back the covers and let a little light in on their next big project, which is scheduled to ship worldwide (in all territories at the same time for the PC and next-generation consoles) in the fall of 2008. For a title that is over a year out, it looked surprisingly finished and we will let you know all about it.

If you are reading this then you probably know the history of the Fallout series, but just as a quick reminder and to show why there is so much anticipation (some would say dread) surrounding this project. In the beginning there was Wasteland, one of the first good RPGs out for the PC, back when PC meant a real IBM PC or one of a handful of clones that were just coming to market. It was published by Electronic Arts, way before EA became the mega-giant company that it is today. Later on, Interplay created Fallout, which was the "unofficial" (read not licensed) sequel to Wasteland. And later they followed up with Fallout 2. Both titles were among the biggest hits ever created for Interplay, before they became the shadow of their former selves they are today. At a time when everyone was creating games with orcs and elves, Fallout offered a gritty post-nuclear war wasteland that really stood out. Oh, there was also a PC game called Fallout Tactics which was like Fallout without any of the good role-playing parts and another console game called Brotherhood of Steel which was like Fallout without, well, without anything really.

With Interplay’s fortunes taking a nosedive, they decided to sell the rights to the Fallout world. Bethesda, flush with cash from their Morrowind sales, decided to snap it up.

The biggest question on most fans’ minds is whether Bethesda would keep the top-down view and the turn based interface of the original series. Especially given that Morrowind and Oblivion, the company’s biggest hits, were 3D. People suspected that they wouldn’t and prophesized that the game would suffer because of it.

Well, I am here to tell you that the game is in 3D, but I don’t think anything will suffer because of it. Bethesda came up with what I consider to be an ingenious way to integrate both real-time and turn-based play into the game. You walk around the game world in first person, or you can switch to third person if you like, just like Oblivion. When combat begins you can either play it out normally like a shooter, or you can enter turn-based mode. In turn-based mode you will pull up a diagram of the enemy, just like in the original Fallout games. You will see the chance to hit each part of the enemy, like their legs, arms, antenna, head or whatever. Each shot takes a different amount of action points, which are assigned to you based on how you make your character. When you take the shot you will see it in slow motion, and the 3D action (the enemy movement) will also move forward in slow motion.

You can always exit turn-based and go back to standard real-time play. Your action points will still regenerate when you are in real-time, but will do so more slowly than when you are in turn-based mode. It’s actually a very beautiful way to make the Fallout universe 3D without leaving turn-based gameplay behind.

In the demo for instance, we ran into a part where one mutant with a machine gun was up on a subway platform shooting down at us while another was on our level about to charge with a sledgehammer. The turn-based interface was activated and it gave us time to study the situation. Should we shoot at the mutant with the gun, trying to blast the weapon out of his hand? Should we instead try to hit the melee combatant in the leg, slowing him down and keeping him away from us? It was a very tactical process just like in the original games and if you had saved recently, you could always go back and try a different tactic if yours ended up with your guts sprayed out across the back wall.

Oh, and all the gory scenes that you remember from the first two games are present here. Hit a guy in the leg and you might blow it off. Head shots are amazingly detailed with mutant skulls exploding like over-ripe blood sausages on a hot day. In the demonstration, one mutant’s eye popped out of his head and bounced and rolled down into the gutter. That’s a classic kill players are sure to remember.

And the new Fallout 3 world keeps all the humor and flavor of the original series. You will find broken down nuclear cars (that will still explode if shot up), crazy robots like Mr. Handy, and a host of sometimes quirky wasteland dwellers. At one point we set one of the exploding nuclear cars on fire and then hopped into a portable nuclear shelter (which costs a quarter to use and looks like a phone booth) to avoid the blast. It’s set after the events of Fallout and Fallout 2, and takes place on the opposite coast. The level we previewed was set in and around what was left of Washington DC.

Obviously since we are talking about a game created in-house by Bethesda, the role-playing aspect of Fallout 3 has to be a primary consideration. Here there are some pretty amazing things that were done in order to get you into the game. You play a vault dweller who spends his or her entire life in the vault up until about the time they turn 18 and are forced to go outside by strange circumstances.

As such, the first hour of the game is devoted to in-vault quests as you grow up. You will not only see scenes like your fifth birthday when you are given your first pip-boy PDA, but will also engage in questing inside the vault and be able to participate in some of the intrigue that happens in any society, even a closed one. Your father is voiced by veteran actor Liam Neeson, and how he looks depends on how you look when you create your character. So your father will always look genetically like your character, which is a very nice little touch. Once outside, you will find several Mad Max-type villages and towns populated by a ton of people who need things done. Some of these people will be hard-working honest folk trying to get by in the world. Others will be lying jerks who simply want to use you and throw you away, or worse.

The one full-size town we visited in the demo seemed like a real, living city complete with people doing their jobs, building things and running their errands. There was also a very shady element. How you conduct yourself, like in any good RPG, is up to you. In the demo it was opted to be very bad, though I am sure I would want to play things differently with my character.

And the world looks beautiful. Some people have guessed that Fallout 3 would be Oblivion with guns, and that is not the case. While it does use the Oblivion engine, never once did I see anything resembling Bruma or the Imperial City. In fact, I would go so far as to say that look and feel of the Fallout world has been captured perfectly from the landscape to the costuming of the various people you meet.

The one odd thing that I noticed was the release date itself. For a game that looks so solid, I had to wonder why it’s not coming out till the fall of 2008. But I think this too bodes well for the title. Obviously the game engine and the interface is complete, so the only reason for the delay is so Bethesda can add more content, tons of it. Bethesda officials have said that they see Fallout 3 as being more open-ended and larger than Oblivion, so that is a lot of content. But with a stable base to work from, this gives them plenty of time to make the game bigger and better. And given the reactions I get when people see me wearing my Fallout 3 t-shirt, I think interest in the game will be just as high in 2008 as it is now.