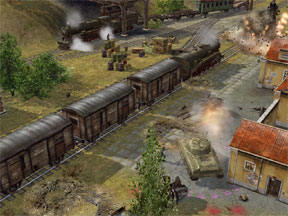 I have always been a fan of real-time strategy games where the emphasis is on small unit tactics and not empire building. Don’t get me wrong, I like empire building too, but all that mining and food gathering is only done to support your war machine, so why not cut to the chase?

Soldiers: Heroes or World War II follows the exploits of elite squads of men from various countries that fought in the war. There are four campaigns to play though in single player mode where you can play as Germans, British, the United States or the Soviet Union. Multiplayer lets you play these missions again, but with the help of more people, so you don’t have to control each member of a team yourself.

Each scenario in the campaign is played on a 3D map that is second to none. Everything on the entire map is in play in some manner. Nothing is scenery. You can burn trees, or entire forests, run tanks through buildings, hijack any vehicle that happens to come onto the screen and generally cause mayhem to your heart’s content. There are tanks, armored cars, artillery pieces, boats and all manner of other vehicles that can be used to your benefit.

And there is a lot of realistic physics in the game as well. If you shoot the wall of a house with an armor piercing shell from your tank, it will blow a hole in the wall, but won’t probably kill the defenders inside unless you happen to hit one directly. It might cause some of the house to crumble if it hits a support but that is about it. However, if you fire a high explosive shell into that same house, likely the entire thing is going to blow out in all directions and take most of the occupants with it to the great beyond.

Similarly, if you hit a stone wall with an armored car, you will break through it most of the time. However if you try the same thing with a motorcycle, your front wheel is going to break and you are likely going to tumble forward in a very harmful manner.

Basically, the entire map is your wartime playground. Blow up what you want, and do whatever you will.

Guns seem realistic as well. A submachine gun is quick firing, but does not have too much penetration power. A light machine gun however will punch through small walls and kill people hiding behind them. They are heavy, but I normally try to strip them off of broken vehicles and have my team carry them around anyway. One man with an MG-42 lying down near a bridge can hold that position from almost anything short of heavy armor coming across.

The game is played in real time, so it’s sometimes difficult to give your squad commands fast enough. Thankfully, there is a slow motion button that lets you bring the action to a crawl during moments when you have to time something right. Otherwise, some missions might well be impossible. You can use it to do some interesting things, like lobbing a Molotov cocktail into the back of a loaded halftrack. This clears out the vehicle nicely after all the screaming and cursing is done, yet mostly leaves it intact for your team to enter. Just hang one of those industrial strength air fresheners in the window and you are good to go.

Fire is also rendered really well here, and has good characteristics. In one mission I just had to lob a Molotov into a German fuel depot to see what would happen. Oh the fireworks! After the flames died down not much was left standing inside, and my team swarmed in to mop up.

I marked the game down some on gameplay. Mostly I did this because the artificial intelligence is pretty stupid most of the time, which is a determent if you tell your guy to guard a vital road junction and he chooses to stare at some enemy off in a field somewhere and ignore a huge convoy coming your way. You can take direct control of a unit, but sometimes you are busy elsewhere and have to rely on the rest of your team to take care of their own problems. They are not very good at it.

Thankfully the numbers in your squad are very small, sometimes a single tank and sometimes three or four soldiers. So you can mostly micromanage the battle, though you will still have to load from time to time when your teammates screw up their simplistic tasks.

Also, the game is very, very difficult. Which in this case means it is realistic. Outposts that you are supposed to infiltrate are well defended with killing fields, artillery emplacements and patrols. When you first start it will look impossible each time no matter what campaign you are playing. As a word of advice, play the game on the "easy" level at least the first time through. It may say easy, but it isn’t. I’ve sat for many hours trying some missions till I found something that worked.

Part of the fun is figuring out a way in. And since everything on the map is in play, there are many ways to achieve victory. Do you hijack a tank? Do you cause a large fire to divert their attention? Do you set up snipers around enemy posts? Do you try to come in from the back and capture their artillery positions? Each plan might work, and the replay value here is high as you play the "what if" game.

Finally, there are a series of bonus missions included with the game. These missions are even harder than the ones in the four campaigns. If you are up for a challenge give them a try. If you can complete the campaigns and the bonus missions, then you have earned the title of hero of World War II. The game gets an impressive 4 and + GiN Gems.