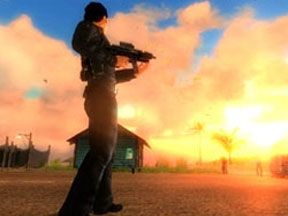 In Just Cause you play Rico Rodriguez, a CIA agent specializing in regime change, amazing stunts and women. Now when I say regime change I am not talking about backroom deals and secret meetings. What fun would that be? No we are talking about the good old days when regime change meant blowing up weapons dumps and assassinating rival leaders and generally causing as much commotion as possible.

This game takes place on the island of San Esperito, which is a huge game world that will take you a good 20 to 30 minutes to cover in a car or motorcycle. There are 21 main missions and a number of side quests which can result in the opening up of new safe houses, weapons and vehicles. Focusing on the main missions in the game will probably take you anywhere from six to eight hours to complete, though you can double that easily with the side missions.

Once you parachute into the island and ride with your contact to the first safe house you are given your first mission which is to free the guerilla leader. The second mission is to liberate a village. The plot goes downhill a bit at this point as many of the missions are to free villages for the rebels or for the drug cartel. However the main missions are interspersed with cut scenes that do an excellent job of keeping the plot enjoyable.

To make things a bit more interesting there are quite a few side missions where you have to collect different items. These missions would be impossible without the assistance of the map, which nicely shows the location of the items with dots on the map. Other side missions include picking up and delivering packages, or killing someone and picking up a package, and delivering the package to someone or someplace, or just returning to the starting point.

Your rewards for these missions are improved trust amongst which ever faction you are working for which in turn will open up new safe houses, vehicles, and weapons. I would have hoped that some more time would have been spent in making the bonuses you receive from the side missions a little more unique or enjoyable, but the new equipment that I bothered to get did not add much to the game.

During the game when you find yourself away from a safe house or if you have lost your vehicle and don’t see anything good around to steal, you can call your friends at the CIA for an equipment drop or evacuation. The later will take you to the nearest safe house for some needed health or equipment. The drop will get one of four rides. At the beginning only the motorcycle is unlocked but as the game progresses, other options will become available.

The thing that makes Just Cause worth it is of course the stunts. Whenever you are in a vehicle you can move to what is called the stunt position. And from there you can leap off and engage your amazing non-tangling and always reusable parachute or leap onto another vehicle. A very short way into the game you will get a grappling hook with will allow you to grab hold of vehicles and fly along behind them too.

Aside from mimicking a Tony Hawk game, from your perch in the sky you can then reel your self in and once you get to the vehicle you can disengage your parachute. All of this is not limited to cars and motorcycles. You can take control of boats, planes and even helicopters. Sadly for some reason, the grappling hook only works on vehicles and does not work on cliffs or buildings.

The main negative to this game is the same system cop / security force system you find in most games of this nature. When they come after you they are relentless, and they just keep coming, and fighting back just makes if worse. Though I swear a few times I was just driving along having done absolutely nothing and suddenly a cop would turn my way and start shooting.

There are two good ways I found to get rid of them. The first is to jump of the side of a cliff where they can not follow (deploying my parachute of course). The second way is to head to a safe house.

The graphics are good and bad. From a distance everything looks really good, but sometimes when you get close to something it looks really crappy, and I can not fault my system as I was playing on an Xbox 360.

For example, I jumped down a cliff to find one of the very first side quest items and I turned around and the cliff had all these freaky colors, and it did not look like a cliff anymore. Maybe I am spoiled by Oblivion, but I was expecting better from Just Cause. On the other hand I turned back around and hopped into the water for a swim and I was thinking, wow this looks really good, what a great effect. So it kind of depends where you are in the game and what you are doing in terms of graphical performance.

Later I was driving along and if you go too fast the world around you can get a little freaky until the graphics catch up. Also, the graphics are not very good when you crash, including when you crash into other vehicles. Overall I was expecting better from an Xbox 360 game. The background music has a nice Latin feel, and does not get old as you play. The voice acting is spotty with lots of bad Spanish / English accents. It is pretty fun if you listen. If they were trying to do this on purpose I would say great job, but I don’t think they meant to be funny.

Overall Just Cause is a fun game that you can spend a lot of time with if you don’t mind that there are a few non-game killing glitches. If you enjoy overthrowing 3rd world governments, crazy driving, motorcycles, helicopter, and planes with lots of guns galore, and let us not forget the crazy stunts, then this is a good game to pickup off the shelf next time you are at the store.

Just Cause appears to be the first game from Avalanche Studios (www.avalanchestudios.se) which was founded in 2003 in Sweden. I complement them on a good first game. And I look forward to playing what ever they develop in the future. I just hope that next time they are be able to spend a bit more time on fixing some of the minor (non game crashing) bugs that still exist their games.