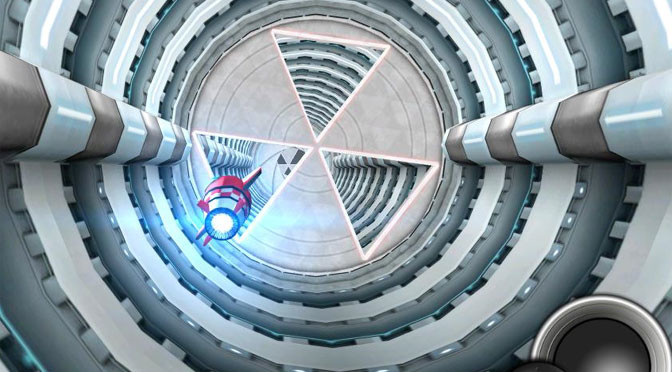 The main thing about constant runner games is that the more points you have, the harder the game is to play. The game speeds up and as the player notices they have a high score, they are hesitant to mess up, which is generally the exact moment when mistakes are made. Constant runners are not for the feint of heart, they pressure players to go faster and faster as they dodge obstacles and pass through narrow passages. Tunnel Trouble 3D is no exception to this model.

The game Tunnel Trouble 3D for iOS and Android is a constant runner type but with a space ship. The game has two different modes to choose from – survival mode and mine mode. The main thing to do in the game is to fly the space ship in this tunnel while dodging obstacles. In survival mode the player has to fly the ship through gaps in the doors they pass through. In mine mode the player has to doge mines that are floating in air. The longer you stay alive or do not crash the faster your space ship goes. Periodically, there are pick-ups that temporarily slow the ship.

In general, the survival mode is easier than mine mode and ramps up more evenly. The mine mode will have players, especially novice runner players, crashing more frequently and likely closer to the starting point.

The controls are easy, which is always a good thing since precision is the name of the game for a constant runner. There is just a joystick to move the space ship through the tunnel and through obstacles. The player can choose if they want the joystick right handed or left handed, I would have liked more controls like touch screen without the joystick or tilt motion, but what is provided here is at least well done and responsive.

The 3D graphics are great from the look of the ship, to the player controls, to the tunnel. It would be nice to have the option to pick different space ships, though in general the graphics here are better than you will find with most constant running titles.

There are a lot of clean lines and fresh futuristic look here and even though neither the Android nor the iOS platform offers real 3D (like with a Nintendo 3DS for example) Tunnel Trouble 3D nonetheless gives a good illusion that might make you think that it does. At the very least, you might experience a sense of false vertigo after playing for a long time.

Tunnel Trouble 3D is a decent game that keeps that player occupied when they want a quick game featuring good graphics and a heart-pounding bit of challenge.