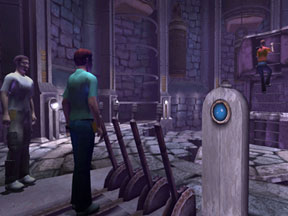 It has been three years since I played URU: Ages Beyond Myst as an offline game, hoping and praying that I would soon get to do so online. The possibility of interacting with other solvers in the environs of the Myst universe was definitely an intriguing one. Unfortunately, the publishers originally decided to pull the project while it was still in beta, and released their online content in two offline expansions, which, while good, were not the same thing as the online experience might have been.

Now we are in luck, because GameTap, which has often been a champion of bringing classic games back to life, has once again decided to uses its powers for good and give us Myst Online: URU Live. Now we can play in the universe of Myst together, helping each other solve puzzles and making the world a better place.

Like in the original URU, you can make an avatar that looks practically like anyone, even yourself. You give it whatever sort of face shape, hair, eyes, etc. you’d like, and off you go.

You are dumped into the same desert scene that we saw in the original, and you can solve it the same way, if you remember. If not, or if this is your first time, then you can always get help from the guy at the trailer, but the initial puzzles are not difficult. Once you touch all of the save points, you can open the exit, and go on to your Relto Age.

Your Relto Age is kind of like your own little haven all to your self. You can access a library of linking books that contain all of the links you have used. You can also change your avatar’s looks and clothing as your moods change. Also, in your journeys you can find pages that add things like waterfalls, or rocks, or bridges to other small islands, which you can turn on or off individually.

Relto also acts as sort of a safety net. You can access the Relto book at all times by clicking it in the lower left of the screen. This will link back if you get stuck, or even automatically link back if you fall from too great a height.

While this game is a great addition to an already great GameTap library, it concerns me that they call it a "GameTap Original," considering it wasn’t originally developed for GameTap. While all of the original "Ages Beyond Myst" content is available in the GameTap version, only some of the "To D’Ni" expansion is there, and there is as yet no sign of "Path of the Shell." I suppose this is alright, as I remember that material well, and solving those puzzles would be just going through the motions for me.

There is some original content, in the form of two ages. Unfortunately, to solve the first puzzle in each one, help from at least one other player is required. Yes, it is totally impossible to solve these ages all by yourself, even given that both ages are solved the exact same way.

While this may seem a good thing on the surface, as it builds online friendships and interactions, it is more difficult to get fellow solvers to help you than you think. Generally, you have to convince someone who has already solved it to come along with you and do what you say as you try to solve it. Finding someone else who hasn’t solved it at the time you want to solve it is quite unlikely. This is definitely one of those ideas that looks better on paper, but you still manage to get some conversation from other players no matter which way you go about trying to get help.

Some Ages you link to will generate a separate instance of that age for you to wander through on your own. But other links will put you in an age with up to 30 or so other players. When the player count is close to the maximum, lag is nearly unbearable, sometimes over ten seconds of lag every few minutes. However, they say they are working on it, and I have noticed a bit of improvement so far.

Considering that Myst Online is just one of a whole slew of games you can play for one reasonable monthly fee, you really can’t beat the value. Add to that the opportunity to (finally) chat and interact with other fans of the Myst genre, and you have quite a catch. I give it four and a half Gems.

Until I see you online, fellow explorers, Shorah.