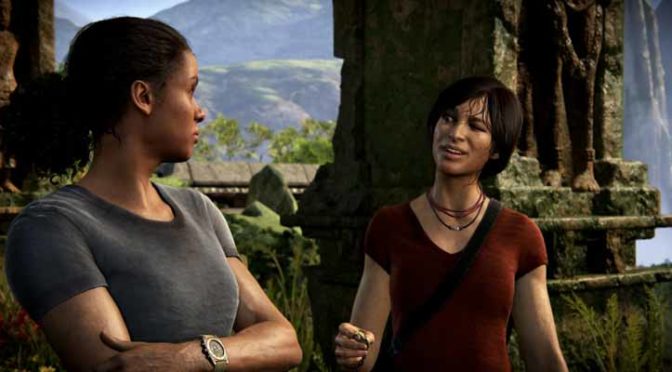 Nathan Drake is the charismatic heart of the Uncharted series. At least, he was until Chloe Frazer and Nadine Ross swung into town for their own standalone game, Uncharted: The Lost Legacy. Don’t expect a cameo from Nate because Chloe and Nadine more than hold their own in what is one of the best Uncharted games.

The story doesn’t break the  mould, but it does give us some backstory for these characters. Chloe has hooked up with Nadine to recover a treasure called the tusk of Ganesh. We meet the duo in India, where we also encounter Asav, a rebel leader who also wants the treasure.

In the very early section of the game, playing as Chloe, I did miss Nathan Drake, but that all changed once she meets up with Nadine. Chloe isn’t as charming or funny as Nate, she’s more ruthless and less heroic, which makes her harder to like. Pairing her with Nadine was a masterstroke.

Nadine’s military background means that she’s disciplined and all about the strategy, but she’s also got a softer side, which becomes evident as the story progresses. This makes her the perfect foil to Chloe’s seat-of-her-pants style over confidence and the dialogue that sparks from the contrasting characters is magic.

The game also gives us quiet moments, where the pair discuss their past. Unfortunately, the writers have gone down the ‘daddy issues’ route for both women, so many of their conversations do focus on absent men, whether that’s Nate, Asav or their fathers.

[amazon asin=B06ZYW7ZHB&text=Pick up this grand new adventure from Amazon today!]

When it comes to setting, India has given the Naughty Dog team riches beyond their wildest dreams and they are laid out for players to see. This is the most beautiful Uncharted game yet. There are countless opportunities to stop and admire wide open vistas, viewed from a cliff top, looking across a lush valley to distant mountains. And each Hindu temple gets more and more beautiful as the game goes on. The Lost Legacy is a visual treat, even in the back streets of India or a bustling marketplace.

There are echoes of Uncharted 4 in this game, from the jeep to the ‘exotic’ locale and the beautiful crumbling ruins. Most of the set pieces are familiar, but this doesn’t do much to detract from the thrill. Sure we’re killing nameless minions in Chloe’s quest for the treasure and the baddie thwarts her in the second act. Sure there’s the betrayal and the redemption and the train sequence, but it’s still fun and we wouldn’t really want an Uncharted game any other way.

The enclosed setting that forms the main part of the game gives the illusion of an openworld game. Fortunately, The Lost Legacy doesn’t fall into the sandbox trap of giving players a plethora of icons on a map to investigate. One might be forgiven for thinking this was Naughty Dog failing at openworld gameplay, but actually it’s better than that.

The game is so beautiful that all you need to do is jump in the jeep and explore. Your reward is collecting optional dialogue moments and photo opportunities. At certain points a triangle appears above Nadine’s head and the women have a chat or Chloe snaps a pic with her phone. There is also an optional mission with a variety of puzzles, which unlock a helpful item.

The puzzles fall into the usual Uncharted rotate the disks or line up the mirrors pattern. However, there are some satisfying stepping stone puzzles and one involving manipulating giant shadow puppets to create a picture on the wall.

None of the climbing sections feel as epic as some of Nate’s most thrilling moments, but once at the top, you’re always rewarded with a view. As a game that began life as mere DLC, Uncharted: The Lost Legacy doesn’t add any innovations. However, Chloe has her own fighting style and Nadine will whisper enemy locations during stealth sections to help you take them down i.e. kill every last one of them.

Asav is a competent baddie, but not much more. The main draw for this game is the growing friendship between Chloe and Nadine. Having two women of colour head up a much-loved AAA game is something to be applauded. Most importantly, once Chloe and Nadine were together, there wasn’t a single moment that I wished Nathan Drake was there.