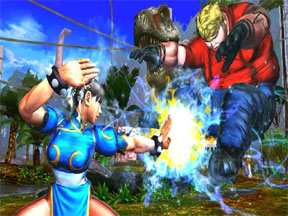 It should go without saying that Street Fighter and Tekken are two of the top fighting franchises in video games. Putting the two together was a logical call for Capcom and Namco Bandai, and this collaboration is by no means a failure. Quite the contrary, Street Fighter X Tekken is both a deep and exciting fighting experience that fans of both series should enjoy. It blends well the two franchises vastly different fighting mechanics into a something different, yet familiar.

However, people more on the Tekken side of the fence as well as casual gamers and newcomers should be warned; SFxT, like its Street Fighter predecessors, is a technical fighter’s game that will please hardcore fans and veterans first.

Street Fighter X Tekken, first and foremost, does a fine job at what it was meant to: bring together the Street Fighter and Tekken series for a fun and playable game that can appeal mostly to both series’ faithful fans as well as draw in gamers who are new to both franchises. The huge roster of 38 playable characters to choose from, including favorites from both franchiseswill keep the fights plenty in number and the tag team combinations abundant, though gamers may have to wait on the DLC for some of their favorites.

As always, the ink-based art style is still fantastic to watch in motion on the Street Fighter characters and Tekken fans will be delighted to see it look just as pleasing on their characters.

Combined with the hefty roster, the assortment of modes to choose from, including a training mode that lets you fine tune your skills, be you newcomer or hardcore veteran, will give gamers plenty to try out.

The new Customization option will also keep fans busy as they learn the ins and outs of the new Gem System. Gems can give boosts to certain stats at all times, or give other advantages when certain conditions are met, such as bolstering your attack power after landing X amount of attacks, or harden your defense after blocking so many strikes. This simple option adds a deeper strategic element to fights, especially versus and online multiplayer modes where the lasting appeal will shine, though the Arcade Mode will add a fun bit of single player action to the mix, testing your skills by taking on the computer’s tag teams.

The gameplay is where SFxT shines, as is true with most good fighting games. Capcom did a fair job in opening this title up to casual gamers, introducing Boost Combos that allow all characters to carry out three attack combos with ease, as well as being able to pull off devastating double team moves with just a simple button combination. The option to make the button combos for special moves even easier will also please newcomers and less technically inclined fighters, allowing them to pull off all the dazzling and hard hitting signature moves with no problem. However, even with all these helpful mechanics in place, SFxT will still punish the inexperienced.

Fans of the Tekken series will notice that the Tekken fighters are more combo oriented, allowing for several set combinations to be used to pull off Tekken-like multi-strike assaults, while the Street Fighter characters retain their reliance on special attacks like the Hadoken in combination with shorter combos or single attacks to gain the advantage.

This will definitely make it easier for Tekken fans to jump in, but again, the Street Fighter engine dominates the majority of gameplay. However, the Tekken character’s lack of projectiles to spam doesn’t put them at a disadvantage. Quite the contrary, their speed and longer reaching attacks can move in on the opponent very quickly, opening them up for a devastating Tekken based bombardment.

Capcom is adamant that this game is for the newcomers as much as for the hardcore fans, but that just isn’t the case 100 percent of the time. Granted, Street Fighter X Tekken has upped the accessibility from its predecessors, but this is a Street Fighter fans game first. There is fun to be had by most, but the lasting appeal is for the veterans who will put in the time to master the fighting system.