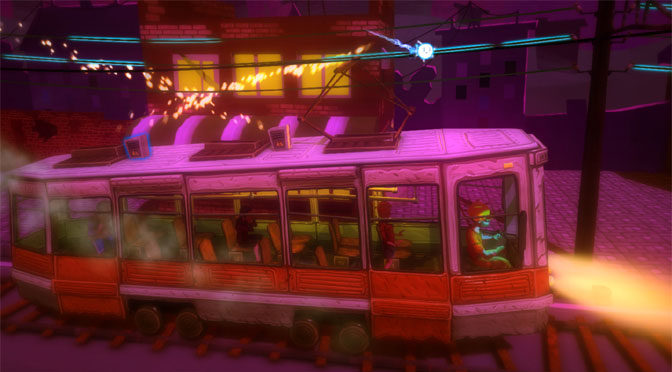 The world runs on electricity. Seriously turn off the power in your house see how much still works. So imagine what would happen if an entire town lost power. Chaos, unrest, maybe even a little anarchy? Well this is the set up for electric platformer TurnOn. At the beginning of the game you see what appears to be some sort of comet crash into a town taking out all the power in it. You are then thrown into the game as an alien spark of electricity whose purpose it is, for some reason, to get all the power back on. So begins your quirky adventure as you move through the town stopping muggings, helping out people’s love lives, and even just helping a guy play some golf.

The entire story of the game is told non-verbally; it is only based around what the game does, and does not, show you. This sort of loose narrative is fitting for the game’s laid back style though it does create a problem because the comic book strip cut scenes are so vague as to be completely negligible for the game. This lack of story involvement gets worse as the game moves on as you focus only on finishing levels and puzzles while not really caring for the results of your actions. Your actions however, are quite fun usually.
At its core TurnOn is a platformer. As a magical ball of electricity, you travel through power lines and transformers. As you move through them, your goal is to turn on lights and other devices whether that be traffic lights, satellites for TV, or even a house’s hot water supply. You’ll find yourself traveling in and through everything in the town to help people out of their pinch.

The gameplay itself is solid if not simple. You jump up and down through wires to get to specific power boxes so that you can power certain things. Now, when it comes to jumping through these power lines one interesting if not questionable aspect of the game is that there is no three dimensional distances to the wires even though visually there appears to be. For example, if you are in a wire that appears to be a few meters away from a wire at the bottom of the screen and you feel as though by jumping you would land short of the wire, don’t worry because all your travel between wires is two dimensional, so depth is not a problem. This however makes the game at times too easy. I found myself honestly wishing the game forced me to think about how to get to other wires more than just up-down-left-right.

TurnOn honestly seems to avoid challenge in most situations. You’ll clear levels quickly and generally only die once or twice. However, a few times, the difficultly becomes almost impossible, which is quite a shock. There are certain tasks like fighting a drone, or riding a railway tram, (which I will be talking more about later) or fixing a malfunctioning Mary-go-round that shoots off negative energy that damages you, while also creating zones of red electricity that resets your entire progress in a level. These levels are often more of a nuisance than a fair challenge as they seem to be random and carry no continuous challenge just spikes and valleys of challenge at random times. Luckily, most of the core game mechanics work smoothly and once you hit a groove you can find yourself flowing through the game quickly and easily. Honestly it is quite fun at times moving from wire to wire lighting up the town.

However, you may have noticed I wrote “most of the core game,” because there certainly is a few bugs with TurnOn, the biggest ones being dead zones and shifting between wires that are separated by depth. First off let’s talk about dead zones. What I mean by this is that there are certain places on wires when you’re moving, generally the ends of them, that don’t register button commands your inputs are “dead.” This a large issue especially in high movement based levels.

One in particular is the railway tram level (I told you I’d be coming back to it) which is one of the worst levels I have ever played in my entire gaming life, no hyperbole. The level has you on a runaway tram trying to slow it down as you jump between wires avoiding negative energy. The dead zones I mentioned make this level unbearable. This is compounded by the fact you have to hit power boxes while on the move, only to realize you seem to carry the same forward momentum as the tram and miss by a mile, resetting you back an entire minute worth of gameplay. Oh and it gets worse, because those negative energies I mentioned, well three of them reset your entire level progress if you don’t heal with positive energies. This level is littered with negative energy, mix that with TurnOn not responding to your commands and you’ll be tearing out your hair in anger.

Visually, TurnOn is very similar to the great Psychonauts. It’s cartoonish, light hearted and overall very appealing. The game’s art direction is very fitting mixing 2D and 3D seamlessly at least from a visual standpoint. I found the art of the game to be one of its high points. The game world seems to come to life as you turn the power back in everything with the interaction of light and the environment being quite detailed.

The sounds and music in the game are great, seriously one of the best parts of TurnOn. It helps make most of a generally relaxing experience which helps since the story isn’t all that noticeable. You’ll find yourself grooving to the keys and soft guitars as you move along in the game. In certain places you’ll even get some southern rock and other genres that are fitting to your place in the game.

In the end, TurnOn is a game that succeeds at certain areas and stumbles in others. The game certainly has a lot of heart put into it, but it feels just a bit too unrefined. Still, if you enjoy platformers, then TurnOn might brighten up your game collection.