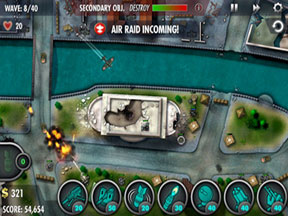 Sometimes as a gamer, you just happen to run into a title that seems custom made for you. That’s what happened to me with iBomber Defense Pacific, a game that combines my tastes for defensive-minded combat (like in tower defense titles) and my love for all things World War II.

The game started life as an iPhone app from iTunes, and then migrated over to the PC through the Steam Internet service. It costs only a few dollars to own on either platform, so that’s quite a value. It’s actually a sequel to iBomber Defense, though it takes that concept, and tower defense games in general, and adds in some unique gameplay elements.

The game puts you in charge of various Pacific outposts as the Americans slowly push back the Japanese in World War II. There is an overview screen where you get to see the various campaigns you will fight in, from Midway to Guadalcanal.

There are three levels of difficulty for each mission you can set for the campaign, so you can select the challenge level that suits you. Higher difficulties give the enemy more armor and firepower of their own, while easier levels gives bonuses to the player. If you totally mess up a wave, you can rewind time and try again too, though once this is done you are prevented from doing it again for several waves. I rarely used this feature actually. Normally when I found that I had messed up, it was a total disaster and I just replayed the entire thing.

You start our with the standard machine gun turret that is weak but fires really fast, and a cannon turret which is powerful but slow. Early levels can be won with mostly machine guns and perhaps one or two turrets for backup when a tank or strong enemy comes barreling down the path. The enemy also shoots back at your gun emplacements, so you need to repair them from time to time. Repairs are relatively cheap compared to buying a brand new turret, so a watchful eye is a good thing in terms of turret health.

After a mission you are given victory points to spend, which are used to unlock turret upgrades. You still have to spend money in the mission itself to actually get a machine gun from a level one popgun to a level three dual-barrel killing machine, but the victory points unlock the ability to do so. There are never enough victory points, so players will need to spend them on the turrets they like best and find the most useful.

There are also up to three universal perks you can set into your character, which do everything from giving you more money to adding armor to your turrets to decreasing their reload times. These are unlocked by earning experience in the game and also by completing special objectives, like dropping a certain number of bombs.

You earn money during the level by killing the enemy. An infantry kill is worth $1 while something like a vehicle may bring in $5 or even more. A machine gun might cost $20 to place and $40 to upgrade, so you need to spend your money wisely and make sure you are getting the kills for your guns.

One unique aspect of iBomber Defense Pacific is the ability to have turrets ‘dig in.’ This drastically increases their range and puts up little sandbags to help absorb bullets the enemy is firing back at you. The downside is that dug-in turrets can only shoot along a narrow cone, which you can turn and aim. If you have a cannon with a long, clear firing arc down a bridge the enemy has to cross, it makes a lot of sense to dig it in and have it cover the whole area. Something like a flamer turret, which lightly damages enemies but also slows them and makes them more susceptible to other damage, probably needs to remain free-wheeling so it can turn and keep the fire on enemies as they pass. But digging-in only costs $10, so if you can get a good line of sight from one of the limited places you can plop down your turrets, it’s a cheap way of upgrading a weapon, This is especially good if you don’t have enough cash to do a full upgrade, or can position the gun as an anchor to your overall defensive plan.

I did find the placement of the firing window a bit touchy, and more often than I liked accidentally set the turret in the wrong direction, but this is a minor quibble. I just wish you could reset your aim without repaying the dig-in fee.

There are also special turrets that don’t shoot, but instead generate bombs for you over time. These bombs can be used to stop powerful units that got around your turrets from reaching your headquarters, but can also be used to complete secondary objectives, like busting open enemy bunkers. There is also a hidden objective, normally a shack or something almost totally obscured in the woods, that will give you points if you find and bomb it on a level. Upgrading the bomb turrets increases the rate at which they produce bombs for you. They are quite powerful because of the usefulness of the bombs which you can launch anywhere on the map, but don’t shoot at all, are vulnerable to enemy fire, and take up a limited slot along the avenue of approach. They are best put in the backfield, as much as a backfield as you can find.

Most levels also have secondary objectives. While you lose outright if too many enemies get to your HQ, thereby killing off your hit points, you are also weakened and earn less victory points if they are able to destroy whatever other building or ship you need to protect. To make this harder, sometimes enemies will spawn outside of the path to your HQ and instead try to sneak in through the jungle, so you need to be watchful. These special enemies don’t seem to move to your base to steal your hit points, but instead mostly threaten your special objectives. Sometimes the only way to deal with them is to drop a bomb on their heads, so try to keep one handy.

The graphics are pretty and look great on the PC. Some people said the text was hard to read on the iPhone, but unless you have a 5-inch monitor on your PC, you shouldn’t have a problem. A mixture of land and sea-based missions keeps things visually appealing, and everyone loves to see burning and exploding vehicles. The audio is good for a game like this, with lots of ‘reward sounds’ to make you happy when you complete your objectives.

If you are tired of monsters and archers in tower defense games, yet don’t want to stray too far into the 3D sci-fi planetary shooters that are out now, then iBomber Defense Pacific may be perfect for you. It offers a lot of bang for the buck regardless of platform, and some unique elements without becoming too complex to play for a few minutes on your lunch break, or for a few hours when you lose all track of time.