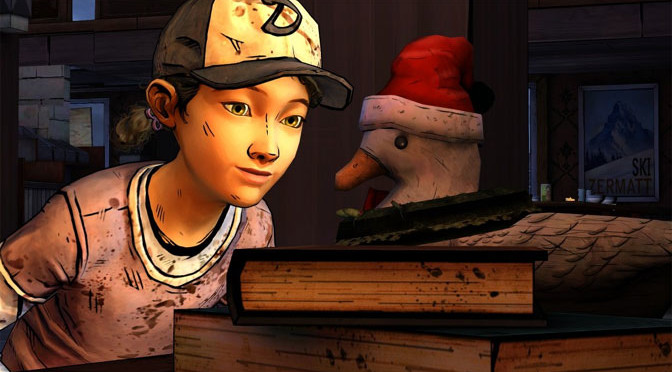 The Walking Dead continues with the second episode of season two, A House Divided.

I’ve been looking forward to episode two ever since I finished the first one, but not for the reasons some may think.

Another part of A House Divided that I was happy about was the gameplay. The first episode of season two had a lot of action elements to it. Frankly, I was worried that the series was going to turn toward a more action-oriented game, but episode two proved to focus more on story.

As with all my Walking Dead reviews, I’m going to be very skimpy on story details. The games are such a good treat that the story should be experienced, not summarized. I will however confirm that there are some surprise appearances in the game. Rumors swarmed that a character from either season one or 400 Days would make an appearance in this episode. In fact, a character from each appears in A House Divided, and I was very happy to see one of them.

Gameplay in A House Divided remains the same as in other episodes. The main part of the game is exploring environments and talking to other characters. It’s a lot like a point and click game in this regard. There are action sequences in the game, but episode two sported a lot less of them than episode one, which I was okay with.

I think A House Divided has the perfect ratio of action compared to story. Now if only the game was double the length that it is. I don’t think three hours it too much to ask from a game that cost $5, especially when it’s got as good a narrative as The Walking Dead does. While I won’t be bashing on Telltale’s ability to tell a story, I will say that I’m disappointed that it’s releasing shorter episodes.

Graphics in A House Divided retain that create comic book look that previous episodes have. I did notice a few more graphical glitches this time around. This isn’t something that Walking Dead games are usually bad about, but this episode even had a character model that failed to load in. This did make for a humorous experience though as the gun the character was holding still loaded in just fine.

Audio in A House Divided is great. The game has great atmosphere and all of the characters are wonderfully voiced. One character that stood out to me was Carver. He has a deep, gravelly voice and does a great job presenting himself as an antagonist (the game makes this clear from the start so it isn’t a spoiler) without coming across as evil.

I’m really torn with A House Divided. I’ve given The Walking Dead series strong recommendations in the past, and I’ve waited a few episodes before giving a concrete answer regarding the shortness of episodes. However, with the last four episodes that have been released only lasting for about an hour, I’m afraid I can’t recommend picking them up for full price. Sure, the game still has great graphics, audio and story, but when an episode lasts for less than half the time that the majority of episodes in season one lasted, it just makes it hard to justify.