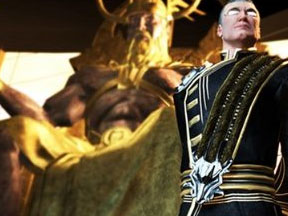 Norse Gods behold the beauty of Too Human! Uh".Just ignore the slight flaws.

After years of waiting, we finally have the first game of a trilogy by Silicon Knights, developers of Blood Omen: Legacy of Kain and Metal Gear Solid: The Twin Snakes. In Too Human you play as the cybernetically enhanced God Baldur, protector to the human race.

Machines are attempting to eliminate the humans and the gods are their only help. Lord help humanity! Norse mythology mixed with cybernetics and gods that are basically robo humans or it may be robo humans that think they are gods, only time will tell which one is correct.

The game controls are, well somewhat lacking. The left analog moves Baldur and the right analog performs melee attacks. It took me a bit to get used to this type of controls, but what really drove me absolutely crazy was the camera. I wanted to reach into the game and strangle the AI controlling it.

Getting close to a corner or wall is a dizzying effect and can get you a tad bit turned around. The graphics really make fighting in this game the most enjoyable part. They flow smoothly and the detail is well, beautiful, and that is coming from the artist side of me.

Dying, well you don’t in this game"at all! Health goes down, flashing a bit red there, but don’t worry! Here drops down a Valkyrie to pick you up and lift you into the heavens. You have seen the light and are lifted to"wait"be set back where you passed a check point? No reload screens, no lives left"great!

But soon you will wish there was a button to skip over that Valkyrie scene. It gets a bit monotonous after awhile. That is about the only thing that is though.

You collect tons of loot from armor and swords to ruins and blueprints. Ruins give you the ability to upgrade your armor and weapons and make them your own, well kind of, within limits. Loot drops will give you human and cybernetic gear, but you will make a choice on which path you go after the first part of the game.

You are introduced to the cyberspace realm quickly and actions performed there also affect the real world. Repairing and purchasing weapons and armor are a quick trip to Aesir from the menu, which can be done at any time during campaign. Several secret areas await to be discovered and if you are like my husband, several achievements to earn.

Online multiplayer allows you to use the same character from your solo campaign. Be warned though, I advise you to play with another character around the same level as yourself. Enemies are scaled to the higher level character and it is no fun for the lower level person to keep going down for the count, over and over again.

Working together with a friend makes taking down some machines mighty nice! One launches the goblin into the air and the other jumps in for the finishing move. A bonus point to Silicon Knights for eliminating the cut scenes in online co-op play.

I was excited for this game’s release and really did enjoy it. Its one game that seems to have the "you will love it or hate it" following. Somehow I found myself more in the middle. I like it but think the replay value is limited. The saving grace will be in the rumored DLC. I’m very curious to see what is developed.

Graphics and character design are excellent and the story line is filled with twists, but does not give away too much too quickly. This is not a game that spoon feeds you the entire saga. The story even ends with a little peek at what is to come. Now let’s hope it does not take 10 years to see it.