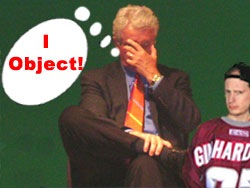 What do all of the following have in common?

They have all been punching bags to a loudmouth; an individual who has spent all of his time, and his position, to attack these seven items (and many more I'm sure) for his own personal gain.

Of course, I'm talking about one John Bruce Thompson.

Of all the things I hate about the city of Miami, there is nothing more I have more hatred for than this one individual, and keep in mind this is a city known for drug trafficking, natural disasters, corrupt politicians, and a college football team that is unable to spell their name right. (Please explain to me how someone spells Miami with a U. It makes no sense at all.)

Still, Jack Thompson is the worst thing to come from Miami. After all we are talking about an attorney who constantly threatens the gaming industry, especially Take 2/Rockstar Games, by using a torrent of litigations and personal attacks. In an ironic twist, he even went after the game Bully, claiming it to be a "public nuisance." He even went after it because of possible homosexual actions because the main character, Jimmy, can actually kiss other male students. However when I played Bully I kept asking myself just what the deal was? In my opinion, the game seemed nothing worse than a prep school version of Revenge of the Nerds.

Come to think of it, Thompson may have been the true "Bully" after all.

But wait a second, why am I referring to Jack Thompson as an attorney? That's right? He's NOT an attorney anymore.

September 25th, 2008 is a day that gamers all over the country will cherish forever, for it was the day that the Florida Bar, months after the Honorable Dava Tunis of the Miami-Dade Circuit court found him guilty of 27 of 31 violations, found that John Bruce Thompson was permanently disbarred without leave from practicing law in Florida.

A possible disbarment was hinted about a year and a half ago when I was in Tampa and had an informal interview with Brent Hatley, producer for the Bubba the Love Sponge show on Howard 101. We talked about Thompson and he hinted about disbarment hearings. One thing he told me that struck me personally is that Thompson could not use his law pulpit "for personal motives," something that he was notorious for.

After the 27 guilty charges, disbarment looked inevitable, and was recommended by prosecutor Sheila Tuma in early June. It was only a matter of time before this announcement would come, and now that it's finally here.

True, Thompson is going to end up becoming an even bigger public figure than he is now, and will eventually start some non-profit organization, but the fact of the matter is he cannot sue everyone, myself included, for talking about him like this. September 25th was a long time coming, and it's time to let your voices be heard. Good riddance Jack. Don't let the door hit you in the rear as you walk out.

However, I do have one side note I want to send to Joystiq's Mark Methenitis, who said the following: "While I know a lot of people in the industry truly dislike Jack, I hope people show a bit of respect for a man who has just lost his livelihood."

Sorry Mark, he didn't just lose his livelihood, he brought this up on himself! If he didn't act like such an outspoken loudmouth and attention grabber, then maybe he'd still be practicing law. You can't use your law practice to promote your own personal vendetta, and that's what he did. So did he lose his livelihood? No, he gave it up!