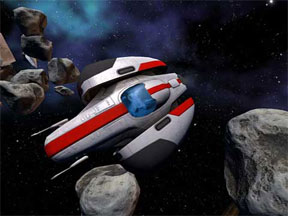 With plenty of Medieval style MMORPG’s floating around where wizards, warriors and gnomes are plentiful, Vendetta Online brings you to a sci-fi world where you get to man your own spacecraft. This is, no doubt, a welcome relief from a world flooded with some games that just look alike. The story starts with what we all knew would happen; mankind took over the stars and made space into a metropolis of space stations. Space stations take over for cities, and asteroids and space junk take over for"well"potholes? Of course, there are warring factions because we all can’t just get along, even in space!

As you start out humbly with a rather bland looking spaceship, you have the ability to add onto your ship or purchase new ones. You can become a fighter or trader, which opens up a window to attempt the passive life (in vain, no doubt) of a merchant or you can "pimp your ride" into a speeding spacecraft of death, destroying all that crosses your path!

Should you choose to take either path or dabble in a bit of both, you are in for some pretty decent gameplay. There are basically three different types of missions as you attempt to level up. There are combat, transport, and mining missions but almost all of them involve some sort of combat. Mining and transport seem easy enough but the mining areas are guarded by droids that you have to extinguish before getting your loot. Transport can be easy and sometimes a little dull unless you have to go through enemy territory to get to your destination. And combat"is combat. Go kill stuff!

You start the game with a rather in depth tutorial which is pretty necessary due to not only the gameplay intricacies, but also the chat channels and interaction with other players. I, for one, am in love with tutorials. It saves you time from reading and rereading the manuals as well as gets you hands on experience and pushes you beyond the simple things like movement and firing your weapon.

While the tutorial is rather in depth, it allows you to go at your own speed, continuing when needed and reviewing if necessary as well. It doesn’t take a terribly long amount of time and you can opt out of it as well. Still, it is a good way to go when you first pick up the game.

After the tutorial, you dock at your local space station. That is when you can access your menu and view everything from the mission to your ship. You can upgrade your ship, buy and sell items and most importantly, take a much-needed break from floating around space. The menu looks a little archaic but it is pretty simple to navigate. For most of you, it will bring you back to some of the older style PC games with large buttons and arrows. If you can’t figure out this menu system, then you have some problems! The items are displayed and a brief description and makes your transition into the buying/selling portion of the game a little easier.

After you get acquainted with the menu and pick your first mission, it’s off into the vast reaches of space. As you fly your ship, your view is just like a FPS game which allows the combat to be right in your face. As you start your journey, you will have to travel to different quadrants of the solar system to accomplish your goals but doing this can be a bit of a hassle at times. If you need to go to a different quadrant, you have to be a minimum distance away from a space station before using your hyper-space travel feature (which fires you directly to your destination). Getting to that minimum distance can be a pain sometimes since your spaceship doesn’t start out being the fastest in the galaxy.

The combat gameplay basically causes you to strafe back and forth while you fire at your opponent. The computer AI either sits back and fires while you glide side to side to avoid the shots or it dive bombs you kamikaze style and leaves you panicking and confused about which way is up. Is there an "up" in space? Oh, that’s a whole other article, sorry. Anyway, the controls are pretty easy as you navigate with your mouse and fire by clicking. When you couple that with a few keys to accelerate, turbo, and decelerate, you have yourself a pretty user-friendly interface.

The chat interface is pretty standard as with other MMO games. You use / for the channels and then you can get to typing away. The community is pretty standard as well. With any MMO you’re liable to run into a little bit of everything in the general chat. People are pretty helpful which makes for a good place to get a few tips. However, the game doesn’t seem too flooded with people so your contacts may be limited. I didn’t play long enough to get into the guild system or create any great friends but I’m sure if you played more you’d find someone to enjoy the game with. You don’t need other people in order to play but it always spices things up a bit.

In your travels, you probably won’t be running into too many other real players. The world itself is just too big for the number of people playing. I never thought I’d say a huge world is a bad thing but at times in Vendetta, it is. It may be an MMO game but the world dwarfs the subscribers. Also, don’t plan to be blown away by your scenery as you explore the many territories. You will pass the typical space junk and run into some unimpressive space stations. Patches and frequent updates can make up for some lackluster graphics and tired scenery, however.

Perhaps the best thing about the game is the cost. You can download it, try it out for free and then subscribe for only $9.99/mo. Hence, the 5 gems for value! As mentioned, there are many various updates and the downloading process seems to run very smoothly in comparison with some other MMORPG’s like World of Warcraft. Vendetta is pretty glitchless so you don’t need to worry about too much downtime.

With a plethora of MMO games out there, Vendetta Online probably won’t be getting the numbers of subscribers that some games are but it will attract the sci-fi crowd. I would have to say that this game has its own little niche in the MMO market and may gain a cult following since it is one of the only games of its kind.

It is a pleasant relief to see a game with very little lag and plentiful updates. If you are looking for a different kind of MMORPG and don’t feel like spending tons of money, give Vendetta a shot. For those of you looking to be blown away by graphics and sound you may want to pass this one up.