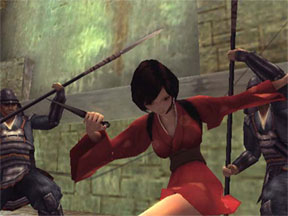 Red Ninja: End of Honor paints a portrait of a dark world, splashed liberally with sprays of bright red blood.

The story of the game is that a little girl named Kurenai watches her father get murdered by ninjas. It is a time in Japan’s feudal history when two powerful warlords are battling for control of the land. Kurenai’s father is a weapon Smith and is working on inventing a machine gun, which would easily tip the balance of power in a Tom Cruse "The Last Samurai" type of way. No matter how skilled you are with a blade, the army with the guns normally wins. So the more evil side strikes out to capture the blueprints for this new master weapon.

This is a cruel time in history and the ninjas not only kill Kurenai’s father, but also beat her up. They wrap her in steel wire and hang her from a tree, leaving her for dead. Kurenai hangs there all day and all night, but is eventually found by Chiyome, the master ninja leader of the other clan. Chiyome trains Kurenai in the art of the ninja. Years later you take over Kurenai in her quest for revenge, though she is now known as the Red Ninja, though some opponents call her the wire ninja, for reasons I will explain in just a minute.

You see tragic events like that tend to stick with a person, and Kurenai makes the steel wire that she hung from her primary weapon. So the stage is set for a lot of blood to be spilled.

Your clan sends you on various missions. Your first one is to assassinate an advisor to the evil lord that killed your family while he is watching a show at the theater. You need to infiltrate the town, then the theater, and finally penetrate his inner security barrier and kill him.

When you start out, Kurenai has attached a blade to the end of the wire. You can throw the blade after locking onto an opponent. If they don’t block the blade, it wraps around them. At that point you basically have them on a leash. If you are quick, you can trap other opponents between you and your victim, which sometimes just clotheslines them to the ground, and sometimes will kill them. You can also yank on the wire, which more often than not causes it to slice through the person you wrapped it around, which slices them in two pieces.

Later in the game, you learn how to direct your wire toward their head, which makes for an easy decapitation and an instant crimson fountain. Or if they are good at blocking your throw, you can try for their legs. If you rip their legs off they will still be alive for a little while, but won’t do much other than moan and feebly try to crawl off in a random direction. Hey, this game is rated M for a reason. No kiddies allowed. Really.

You also have at your disposal some even more deadly attacks. If you can sneak up on an opponent, you can stick your blade into their neck, which other than some gurgling, makes for a pretty stealthy kill.

And did I mention that Kurenai was hot? One other special attack is seduction, which makes for the worlds worst first date. If you can find a guard by themselves, you can attempt a seduction maneuver. If it works, the stupid guard will lower their weapon and come walking over, saying "This is too good to be true!"

Of course it is you dolt. You are supposed to be guarding a top secret weapons facility and some half naked girl comes over and asks you to take a break because it’s so hot? When the guard gets close enough and goes for a kiss, the attack key instead puts him on the ground. Plunging your blade into their eye ends that encounter quickly, though not painlessly – at least for them. You start to think that perhaps Kurenai has some unresolved issues to work out, but anyway she makes for a highly efficient assassin and is pretty charismatic as mass murders go.

So the game sounds like it totally rocks right? Well, unfortunately there are a few major flaws that will probably keep it from becoming one of those all-time great titles.

The biggest and most frustrating is the camera angles. How many times have we seen a game ruined by this, yet they keep making them? The camera is supposed to have a follow camera, but it is one of the worst I have seen. The original Alone In the Dark had better camera angles, and they were made purposely bad.

You can’t control how far back the camera is positioned, and it sits about two feet behind Kurenai. So you never get a good field of view. This makes fighting multiple opponents much harder than it should be, since you can’t use your best clothesline attack very easily because you can’t tell where everyone is standing. If you take time to rotate the camera manually, you not only get dizzy but whatever you end up looking at blocks your view of something else. What you really want to do is zoom out a bit.

Also, many times during the game I would be running in a maze-like area and get totally lost because the camera would not show me were I was. And don’t even think about getting near a wall. The camera tries to go behind Kurenai, but is blocked by the wall too, so it rotates around in front of her which only shows you your character and about one foot on both sides. Enemies can easily be a few feet away attacking you and you won’t even see them. And since your seduction attack needs to be launched when standing against a wall, this makes using that effectively a lot more difficult.

Also, the game relies a lot on stealth. You are supposed to sneak up to or past guards, yet unlike other stealth games you are given no indication about how stealthy you are being at the time. Sometime you will be crouched down behind a crate and somehow the guard will see you and run over to attack. Other times you can be standing right in front of a guard not very far off and he won’t even know you are there. I mean these guys really need glasses if they can’t see a girl in a short red kimono with black undies standing about 15 feet in front of them a high noon.

Some type of a stealth gem indicator like in the Thief series or at least better-defined shadows would really help to boost the hide features of the game.

Gameplay features of the game aside; I did have a great time playing it. There were some frustrating moments when I could not find a way out of a room or two or big combats when I could not fight at peak efficiently because of also battling my camera. But ultimately the game was a lot of fun and I enjoyed the unique weapons used by the Red Ninja. And I have to admit that cutting guards in half was pretty satisfying after a long day at the office.

The game earns 3 GiN Gems overall, but note the low gameplay score. If you can deal with that, then you should have a lot of fast-paced action with Red Ninja. Also the M rating is not just for looks this time. I can’t say if this is the bloodiest game I have ever played, but it’s easily in the top five. They don’t call her the Red Ninja for nothing.