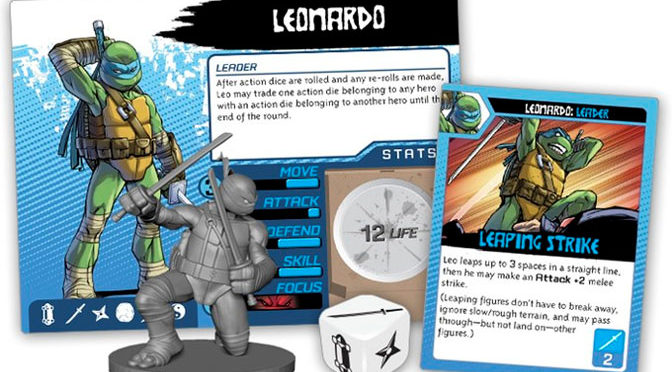 Teenage Mutant Ninja Turtles:
Shadows of the Past

There is no better place to test a board game than at a comic book store, and there is no better store I can think of than Victory Comics, in Falls Church, Virginia. Victory Comics hosts many Magic the Gathering tournaments, board game, and RPG nights. The game I reviewed was IDW’s Teenage Mutant Ninja Turtles: Shadows of the Past. I was fortunate that one of the people helping me to review the game happened to be a fan of both the comic and the cartoon show for Teenage Mutant Ninja Turtles.

Pulling the game out of the box shows this offering comes from a comic book company. Its colorful graphics, different sets of dice (both battle and action) covered in symbolic silhouettes, along with well-crafted hero and villain figures are well above the average board game. The rulebook looks like a comic book and the comic book inside the game informs the rules. 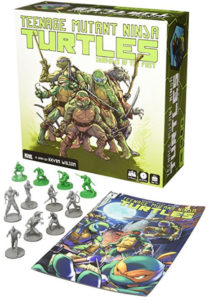 The people who helped me review the game were David, who works for Victory Comics and two of his friends Jonathan and Mike. David, a fan of the original comics and TV show was very impressed with the heavy cardboard stock of the box and the artwork. We both had a laugh over the little Pizza “life tokens,” manhole covers, and garbage bags that are used throughout the game.

The setup for this game is not simple and lends itself to following a sound strategy and employing the right tactics. The game can be played with two to five players and has a team component that becomes very important once you get three or more. David remarked that while this was not “Warhammer” complicated it was still no simple diversion.

[amazon asin=B01DWPW3X6&text=Grab your own copy of the amazing Teenage Mutant Ninja Turtles: Shadows of the Past from Amazon!] 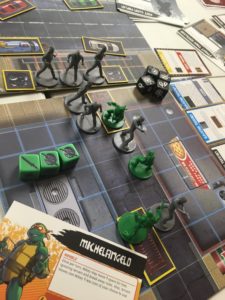 The game, with its forty-five plastic figures, twenty-three dice, 132 status tokens, forty-six prop tokens and six double-sided maps makes set up very intriguing. It’s a game dynamic very much like the designer’s successful previous game, Descent: Journeys in the Dark. In that game one player takes the role of the Overlord, who controls the enemies and plays cards to hinder the hero players. In this game one player takes on the role of the villainous Shredder, leader of the Foot Clan and the rest pick from the four Turtles.

The antagonist in this game, Shredder, sets up the scenarios. The game comes with sixteen scenarios already prepared. Mike, the most tactical of us, saw how teamwork worked well with the dice rolls. The different turtles can combine, borrow or reroll certain battle or action dice. Since each player (Turtle or otherwise) has their own dice, the advantage to borrowing makes or breaks much of the game play. 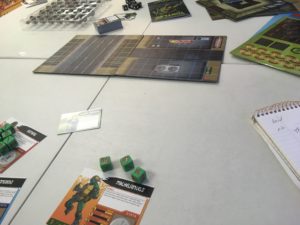 As we found out fast the person who plays as Shredder, in many ways, acts as the Game Master. If you play one of the Turtles the game is very kinetic, with lots of different actions you can use to accomplish your goals. If you play Shredder, it’s more about stopping the Turtles and sometimes you’ll win by just getting away. This is where we all had a minor concern about the game. Since no play-by-play example is used to show a whole game as a first-time player you have to move slowly to understand it.

Jonathan pointed out that a rules erratum would be welcome so as to speed game play. He enjoyed the game, even though it is not a game he would normally play. The high quality of the game pieces and the art impressed all of us. 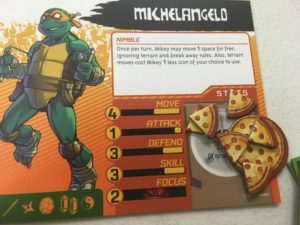 This game, while dealing with mutated Turtles that eat Pizza and perform martial arts, is for ages fourteen and up. It isn’t due to the subject matter so much as the higher level of rules and patience required. If you are a TMNT fan, it’s worth the purchase. If you’re not a big fan but want a challenging board game that encourages teamwork, but doesn’t take itself too seriously, it’s worth the money.

I would give this game four and half pizzas out of five! As for the staff of Victory Comics I would give them a five out of five for hosting the game review session! They ordered the pizza for us and made the experience lots of fun, just like the game.