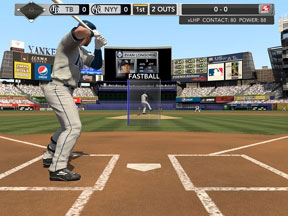 This is the fifth release of 2K Sports’ Major League Baseball franchise for the next generation. Needless to say, it has not been very successful so far.

A brief history: 2K6: In the Xbox 360 version (the only one available since the Wii and PS3 weren’t out yet,) a game killing bug caused the system to lock up at about the second inning. A patch was eventually released to fix the issue but the damage was already done. 2K7: While the lockup issue was a memory, 2K7’s biggest problem was the pitching system was way too good. Almost every pitch was perfect. 2K8: The game suffered from serious frame rate issues. And 2K9: Kush Games is shown the door as Visual Concepts takes over, starting the game from scratch. As a result, the game is incomplete upon release and receives scathing reviews.

But now with Visual Concepts getting a full year of development time, have they taken advantage of it? For most of the time the answer is a resounding yes.
In fact, I’m willing to say that Xbox 360 baseball fans finally have a decent baseball game to call their own, no longer jealous of PS3 owners and their successful The Show series.

Baseball is a very difficult sport to recreate on a game console (or PC for that matter) and only a few have been able to do it correctly. My previous favorites have been the High Heat series from 3DO and the previously mentioned MLB The Show series by Sony. But if Visual Concepts keeps up what they did this year, it might just be a year or two before they can be placed in that echelon.

For starters, the pitching mechanic is greatly improved. Back in 2K8 the pitching stick mechanic was added, but it had serious issues. You would try to perform the motion of a specific pitch but the game would read it as another. As a result, your pitcher might hurl a "meat pitch," easily hittable and it would result in a big play.

2K10 is smart to make you select your pitch before doing the motion. In addition, the motion detection is far more forgiving. A slight misstep will cause the pitch to either be "overthrown" or have a "bad gesture" but will still be received by your catcher. Only a completely inaccurate motion will cause a wild pitch.

CPU pitching is also much better this time around. One criticism I always had with baseball games, The Show included, is that the AI pitchers throw way too many strikes. Even when "corner painting," they are always strikes, and good luck with getting a walk when batting. MLB 2K10 finally features actual balls and strikes, without me even having to adjust any AI sliders. My walk count, both when pitching, and hitting, has increased to realistic standards, and thank you Visual Concepts for making this a reality.

2K Sports is so proud of their pitching system, that they are offering a $1,000,000 bounty to the first player who can throw a perfect game.

Batting too has received a few updates with the swing stick. While it still features the contact swing (pushing up) and the power swing (pull down, then push up,) pushing the stick to one side or another will perform a defensive swing. Do you need to protect against a bad strike and just hit it foul? That’s where the defensive swing will help out. Check swings were originally not in the game, but thanks to the most recent patch, that seems to have been fixed, though I have trouble performing them still.

Baserunning is performed with the shoulder buttons. One set is just to advance (or retreat) one runner while the others are to advance all your runners. It can be difficult however to select different baserunners, so I just decided to control the lead runner.

Fielding is simplistic and accessible. I had no trouble making the big plays when needed. Well, almost all the plays, because it seems as if when it comes to base stealing, the AI has the tendency of Rickey Henderson; they are almost always successful. Even adjusting the AI sliders caused no effect. I’m hoping another patch will come out that will remedy this issue.

Needless to say 2K finally got most of the baseball fundamentals down right, and this year they are adding more to the game.

Similar to NBA 2K10, this year’s MLB features the My Player mode. However where I was frustrated with the strictness of NBA, I felt quite at home with the one in MLB. After creating my player, he started off with the Altoona Curve (the AA Pittsburgh Pirates affiliate,) and that’s where I noticed the first promising sign: I had a Call-Up ETA meter. No longer did I have to wonder if my next game will be my first in the Majors. Now I KNEW when I would be called up by fulfilling my predetermined requirements. But that’s what surprised me the most. I didn’t think my player would go straight to the Pirates; I thought he would have just been promoted to the AAA league Indianapolis Indians. Sure the Pirates are a horrible team (thanks to a terrible owner who cares more about filling his own pockets than making a contender,) but to be called up straight from AA Altoona was a surprise.

But what I really enjoyed about the My Player mode was the fact that it actually gave me a chance to improve myself. In the 70+ games I played in NBA 2K10, I literally had to play the game perfect in order to get my rating higher. Even just having my matchup score or my inability to make a simple layup resulted in a poor grade, and in turn, a permanent stay in the NBA Development League (with the exception of a failed 10 day contract with the Oklahoma City Thunder.) Even worse, I got nagged every game by my agent about how many points I gave up. That wasn’t the case with MLB. I was constantly able to improve my player, reaching true Major League caliber, and only getting praise from my agent about a 4 hit game or scoring 3 RBIs.

I did have two issues though with My Player in terms of baserunning. I noticed that when batting, my opponent’s pitch count can get some very unusual numbers. If I am batting at the 1st inning with two people out, the pitcher has no strikes in his count. This is mathematically impossible as when a ball is in play (which caused the previous out,) it counts as a strike. Even further, sometimes the pitch count when the game goes into about the 8th inning will reach upwards of 140! Usually pitchers don’t throw more than 100 pitches per a game, and are relieved shortly after. Secondly, for some reason, most likely because of the perspective being used, the shoulder buttons are reversed, which might cause some confusion for those who switch back and forth between My Player and the other game modes available.

As of this writing, my player is in the start of his first full rookie season, and is currently batting .360 with 5 HR and 20 RBIs. At this time, if I was working on my NBA career, he might still be stuck in the NBA D-League. Kudos to Visual Concepts for taking my criticisms of My Player to heart.

But one thing both games do great in, is in the Today feature. MLB Today not only updates all the rosters to match those used in the real MLB, but all the games and starters that are scheduled to play that day. I am always a fan of simulating games that are to take place (as my Hardcore Bowl predictions easily prove,) and just like NBA, this is a welcome addition. Even better, the amazing three person commentary provided by Gary Thorne, Steve Philips and John Kruk actually mention upcoming games that are based on the real schedule!

Now since the actual MLB season hasn’t started at the time of this review, I’m curious to see if they will recap previous games and the season’s stats and standings in the same way NBA 2K10 does.

All I can say is the integration between the game and the real league is a much needed addition for stats nerds such as myself.

Still there are some issues I have with MLB 2K10. The game still has some bugs that need to be ironed out. I noticed some animations that seem to repeat themselves or glitch for no reason whatsoever. Another bug I noticed takes place during the loading screen that shows the previous game’s score. The score is actually doubled. What that means is if I beat the Yankees by a score of 7-4, the display would say "LAST GAME: WON Vs. NYY 14-7." It’s not a game killer like the 2K6 freeze bug, but it needs to be looked at.

It took five years to finally do it, but 2K Sports has finally produced a complete baseball package. While it’s not the dominant force that MLB: The Show is, it’s definitely a step in the right direction. If it can iron out the remaining bugs and maintain the benefits of the MLB Today mode, I can see MLB 2K going head to head with The Show and becoming a true contender.

Oh and of course, this year’s game is unbelievably fun, something I never thought I’d say about a baseball title ever since High Heat’s developer 3DO closed up shop.

CONS: While receiving a recent patch, the game still has many bugs. Difficulty with check swings when using the analog stick. AI basestealing is near perfect, and pitch counts during My Player mode get pretty strange, and hopefully a patch will fix both issues. For some strange reason the baserunning controls are reversed between My Player mode and other game modes.